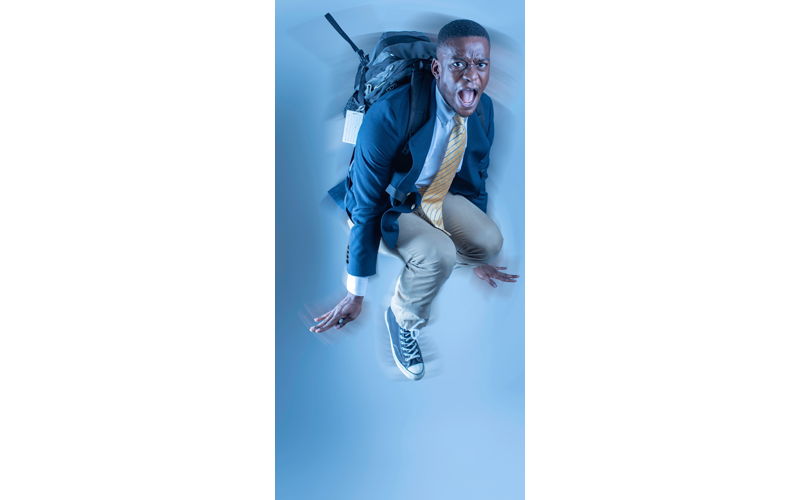 Sharon Graci, PURE’s artistic director, runs open rehearsals at the company’s practice space in the Cannon Street Art Center. Over the last few weeks, she’s noticed passersby stopping in to see what the music is all about.

“The cast is so talented,” Graci says. “People in the building are constantly popping in their heads to watch them move and hear them sing.”

The public will have an opportunity to see Choir Boy as a final product when it arrives at Dock Street Theatre on Oct. 2. The play will undergo a four-day run that coincides with the MOJA Festival, an annual celebration of African-American and Caribbean arts. Choir Boy, written by Tarell Alvin McCraney (the award-winning playwright of Moonlight), debuted in 2012, and has enjoyed a successful run on Broadway this year. The New York Times called it “powerful.”

The play’s premise — that of a young, gay black man (Pharus) attempting to become leader of a legendary prep school gospel choir — struck a chord with Graci, who is directing PURE’s adaptation. She was drawn to Pharus’ story: that of a young man who feels like an outsider in a social circle that he closely identifies with. “He’s trying to determine how to live authentically in a community that has been instrumental in developing him as a person, but at the same time, has never fully accepted him,” she says.

Jairus McClanahan, a Charleston Southern grad, admits that it’s been a challenge to embody the complex character of Pharus, whom he describes as “so smart … sensitive … [and] reckless with his quick-witted comebacks.” The role, while difficult, isn’t out of McClanahan’s comfort zone. He sees a lot of his younger self in Pharus, particularly his own bygone tendency to say the first thing that came to mind, regardless of potential consequence.

“Whatever I thought in my head came out of my mouth … though I did find a balance before high school,” he says. “Pharus is the older version of the younger me. If I was like him in high school, not only would I have probably gotten into fights everyday, but my parents would have kicked my butt for being a smart aleck.”

There’s a flip-side to Pharus’ confidence, however, a sensitivity that he conceals from those around him. That sensitivity, McClanahan postulates, may have roots in Pharus’ insecurity about his sexuality. Pharus overcompensates by assuming a hyper-confident public persona. “He wants to seem tougher than he is, but behind closed doors, he’s an emotional wreck … in the show, he has these intimate moments where he questions everything,” McClanahan says.

While Pharus feels like an outsider in the choir, McClanahan himself is an outsider, in a sense, to PURE. Choir Boy will be hisç debut with a theater that has grown into one of the premier companies in the Southeast. In fact, four of the seven actors in Choir Boy‘s cast — McClanahan, DeBryant Johnson (A.J.), Kendrick Marion (David) and Jaden Jenkins (Junior) — will be appearing on the PURE stage for the first time when the show opens. That group, plus R.W. Smith (Mr. Pendleton), Joel Watson (Bobby), and Henry Clay Middleton (Headmaster Marrow), has been putting in 20-30 hours per week — on choreography, step rehearsals, vocal practices, and more — to ensure that the production is up to snuff when it premieres.

“Just like any cast, they’ve had to gel in pursuit of telling a story,” Graci says. “But rehearsals have been a blast. [The cast] is hilarious, and they’re so enthusiastic and hard-working. I can say, without hyperbole, that they’re a joy to be around.”

McClanahan, who identifies as pansexual (“if I had to label it as something,” as he puts it), knew he had to be a part of Choir Boy upon reading the script. When Graci contacted him in August about joining the cast in earnest, he was all-in. His excitement about the play stems from the fact that it’s a well-told story that’s both relatable to him personally, and one that makes a grander statement about individuality and authenticity.

It’s this theme of inclusion, a value PURE champions, that made Graci excited about producing Choir Boy. She believes it falls in line with PURE’s vision of telling provocative, thought-provoking stories that reflect the people of Charleston.

When she and her husband, Rodney Lee Rogers, co-founded PURE in 2003, they did so because they wanted to feature productions that were interesting to them — plays that were entertaining, real, smart, and conversation-starting. In Graci’s eyes, Choir Boy fits the bill perfectly.

“It encourages everyone to practice radical inclusion,” she says. “It teaches us to open our arms wide to the other, and to embrace the unknown, so that what is today different might tomorrow be known to us. Whom today we may call ‘other,’ tomorrow we may call ‘friend.'”

“That’s the calling card of Choir Boy,” she adds.