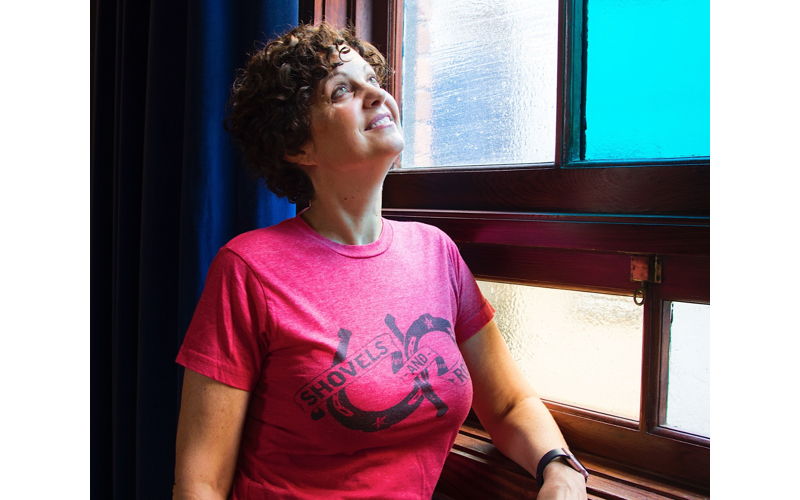 In 2003, my husband Rodney Lee Rogers and I founded a new theatre company in Charleston. We named it PURE. It was a play on the idiom “pure theatre,” which is used to describe acts of high theatrics in everyday life. It’s also used to describe exceptional artistry on stage. To us, it represented the desired state of being for our company. It described a place of honesty in our work where the only required elements were a great script, great actors, and a great audience. What’s funny to me now is that we had no idea how difficult those three things would be to find.

In 2003, we only had three of our five children, although we would soon have our fourth, and we had just sold our house to pay for our theatre. We were insane. It didn’t take long to suffer the injuries of learning everything the hard way, and we used to joke that whatever decision we made, we should immediately do the opposite because it felt as though we were seldom right and the breaks rarely seemed to go our way. Hindsight is clearsighted though, and in retrospect, nothing could be further from the truth. All of the breaks went our way. We had capital, we had an actual theatre space, we had great taste in material, and we had a tiny but loyal audience, and by the start of our second season in the fall of 2004, RW Smith and David Mandel joined us, and the four of us became an Ensemble. This was the best fortune of all because we found our tribe. We had each other.

In those early days, we didn’t know that we were taking our first steps to build an institution that will continue after we’ve had enough, or have decided to spend our next decade traveling, or have croaked in the back dressing room. We just wanted to act and direct plays that were interesting to us and our audience, but mostly to us. It would take us several seasons before we figured out that an audience can only take so much intensity. Thankfully for all parties involved, contemporary playwrights have softened the edges, and we would be hard-pressed to stage another “death and dying season,” even if we wanted to, which we don’t. So, you’re welcome.

In the more than a decade and a half since we began, and two became four, became six, became 10, became 20 Core Ensemble Members, PURE has continued to grow. The Ensemble is flanked by three resident designers, and our artistry is supported by five staff members (not nearly enough), a supportive Board of Directors, and scores of volunteers. We all come together to do what we do in service to thousands of audience members each year. That’s PURE, all of us taking part and committing to the truth that well done, professional theatre can and does change lives, one story at a time.

Story is the backbone of PURE. It’s the lifeline and spinal cord all wrapped up to form one indispensable component from whence all good things come. Stories at PURE have to be worth listening to, we have to have a fighting shot at producing them excellently, and they have to provide the audience with something to talk about when they leave the theatre. If a story can’t deliver those three elements, then we can’t keep those three promises, so we won’t produce it. We like that we know who we are and what we’re about, it simplifies things, and it makes things much harder.

On Friday, we’ll open our 17th season with a world premiere production called Last Rites written and directed by PURE Core Ensemble member, Randy Neale. At the same time, Randy is acting in a one-person play in NYC that he wrote called Chaos Theory. Randy is also insane, it’s why he fits in well at PURE. This is our first full season in our new home, Cannon Street Arts Center. We’re still pinching ourselves because the space has air-conditioning that works, a vast parking lot for our audience, and reasonable landlords. It really does feel almost too good to be true, and I’m fairly confident that my next 16-year reflection will include Cannon Street Arts Center as one of the best things that happened not only for PURE but for all performing arts in Charleston.

Sixteen years feels like a long time, and it feels like no time. We’ve grown, but we haven’t changed. We’re still a bunch of theatre nerds who really just like being around each other. We’ve formed a family at PURE, made up of the artists and audiences who feel at home there. There are a lot of hugs in our lobby, a lot of catching up on how things are going when we haven’t seen each other in a while, and we know a little bit of one another’s journeys. The truth is, it’s all pretty remarkable, this thing that is PURE, and it is not lost on me, just how fortunate we all are. And this coming Friday, on opening night, look for me in the theatre as the lights go down. I’ll be looking lovingly at all of you, while I lean over to Rodney to say, “Look, darling, we all built this. Lucky us. Lucky, lucky us.”