The Last Ride of Dylann Roof 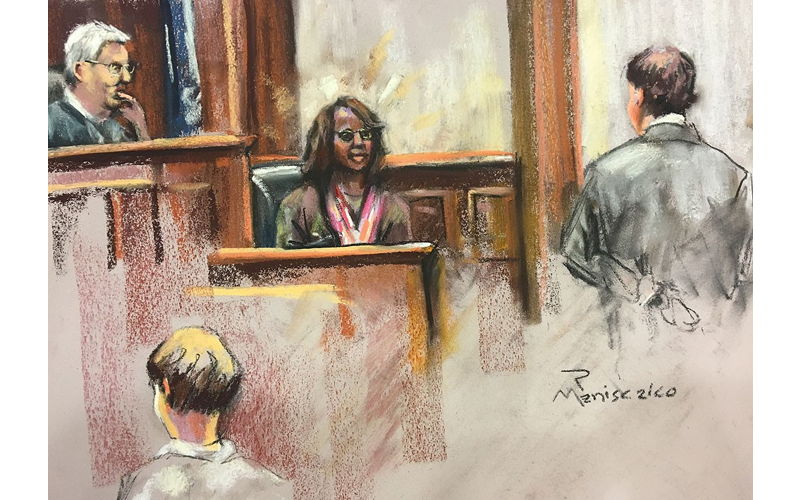 It was just after 9 p.m. when Dylann Roof peeked his head from between the double doors that lead behind Emanuel AME Church. Looking right then left, he saw nothing but a dark parking lot. Roof let the Glock hang loose in his right hand as he casually walked to his 2000 Hyundai Elantra and drove off into the night — leaving behind nine victims dead or dying, a bereft mother who watched her son’s final moments, a frightened child told to play dead, a wife robbed of her husband, a daughter robbed of her father, and the one person he intentionally spared to tell the story of what happened.

Expecting to be met with a hail of gunfire as soon as he stepped out of the church, Roof had no plan beyond the final clip of Winchester .45 rounds he carried with him. Having fired his pistol 74 times in the church, striking his victims 54 times, he intended to turn the weapon on himself if he encountered police. But that willingness to die for his cause proved fleeting.

Heading northwest, Roof drove without a clear destination in mind. He considered Nashville, but merely for the fact that he had never been there. Approximately 250 miles from Charleston, a city of more than 132,000 who had either followed the developing news late into the night or awoken to heartache, Roof was spotted in Shelby, N.C. The final chords of Led Zeppelin’s “Immigrant Song” rang out over the radio in one officer’s patrol car as the sharp wail of siren signalled for Roof the pull over. Making his way slowly up a narrow dirt driveway, the gunman waited as members of the Shelby Police Department surrounded his car, which for lack of any better hideout had become his home.

From the outside, Roof’s black four-door appeared non-threatening except for the front license plate which showed three flags from a failed nation surrounded by the words “Confederate States of America.” Sitting next to Roof was a GPS system, an empty bag of chips, a bottle of water, and several scraps of paper that littered the passenger seat. In the back floorboard were dozens of rounds of additional ammunition and the packaging that had once contained the pistol magazines Roof had discarded at the church. Underneath the bullets lay two small flags — one Confederate, one American — folded into one another and left to mingle among the plastic bags and trash left behind the driver’s seat. Fastened to thin wooden dowels, they’re the type of stick flags you’d hand to a child to wave during a parade or place on the grave of a fallen soldier. Roof treated them with all the reverence of a discarded fast-food wrapper.

Tucked under a pillow in the backseat, Roof hid the pistol that he had used to kill nine people the night before. Inches away was his journal containing his handwritten manifesto. It had taken him fewer than 21 full pages to scrawl out the warped beliefs that he used to justify his attack. The rest of the pages contain brief confessional digressions on love, disease, and blame. Although a brief explainer on why Roof felt compelled to commit such a heinous act of terrorism, his journal is fraught with contradictions.

He writes that he is morally opposed to psychology, calling it a “Jewish invention” that “does nothing but invent diseases and tell people they have problems when they don’t.” A few pages later, Roof writes that homosexuality should be made illegal or reinstated as a “severe mental illness.” On the very next page, he confesses, “One of my only regrets is that I was never able to fall in love.”

In another sidenote, Roof writes, “I don’t respect or feel pity for old white people or my elders as they are the ones who let us get in our situation.” The journal in which these words were written was found inches away from two brief notes Roof had intended to leave behind for his parents. To his mother, Roof wrote, “I’m sorry for what I did, but I had to do it. This note isn’t meant to be sentimental and make you cry. I just want you to know that I love you. I know that what I did will have repercussions on my whole family, and for this I truly am sorry. At this moment I miss you very much, and as childish as it sounds I wish I was in your arms.”

To his father, Roof simply wrote, “I love you and I’m sorry. You were a good dad. I love you.”

Following his arrest, Roof was escorted back to the Shelby police station. With no holding cells, he was kept in the department’s former library that now serves as an interrogation room. No iron bars or two-way glass present, Roof sat handcuffed around an oblong table awaiting agents from the FBI. Michael Stansbury was the first agent to shake hands with Dylann Roof. Introducing himself, Stansbury asked Roof how he was doing to which the 21-year-old replied, “Good.” It had been almost 17 hours since Roof opened fire in Emanuel AME Church. In those hours, Stansbury and his fellow agents had met with Roof’s family back in South Carolina. His father led the conversation, unsure of his son’s location. Police searched their home, retrieving among other items a DVD copy of the 1982 TV movie “Made in Britain” about a violent teenage skinhead and a birthday card that Roof’s father had given him two months earlier.

“Happy 21st B-Day! I love you, buddy!” his dad wrote, the message punctuated with wide, looping exclamation marks. With the card was an I.O.U., promising up to $400 toward a pistol and concealed weapon permit.

Roof was quick to confess to the shooting at Mother Emanuel, acting as if the explanation of his actions was a formality. Flanked by two FBI agents, Roof said, “I killed them,” before telling the agents that he had shot his victims.

“What kind of gun did you use,” Agent Stansbury asked.

Unwilling or unable to acknowledge the disconnect between what he was saying and his actions, Roof explained that he chose Emanuel AME because “I like Charleston. It’s a historic city … It was a historic church.”

Among the items belonging to Roof collected by SLED agents was a list of churches with Emanuel AME listed at the top followed by the church’s address and phone number. SLED agents also collected a latent fingerprint from that same list, discovered just to the right of the address for Calvary Episcopal Church, which sits just a mile from Mother Emanuel. In selecting his target, Roof told agents he simply sat down at a computer and searched for historic African-American churches. He delved no further into their histories or what made them significant. He simply sought a quick designation at the push of a button.

It was the same process Roof had used to inform his beliefs in white nationalism and segregation. Confused by the outcry over the shooting death of Trayvon Martin in 2012, Roof searched online for “black-on-white crime.” The first web page he came to was the Council of Conservative Citizens. Labelled as a white nationalist organization, according to the Souther Poverty Law Center, the Council of Conservative Citizens distributed mock advertisements in 1999 reading “South Carolina now has whiter beaches” after the NAACP declared a boycott of the state due to the presence of the Confederate battle flag over the Capitol dome. Spurred by the racially motivated killings at Mother Emanuel, the Confederate battle flag would be removed from Statehouse grounds less than one month after the shooting.

Through his own writings, Roof claimed that he was not “raised in a racist home or environment.” He told FBI agents that he had never explained his ideology with members of his family out of fear that they “wouldn’t like it.” Unwilling to share his beliefs with those closest to him, Roof chose an insular path of least resistance to shape his motivation for killing. Even as he fired round after round into the fellowship hall of Mother Emanuel, he told the members of the Bible study not to speak to him. During questioning, he even acknowledged the innocence of his victims — a small group of churchgoers who welcomed him into their Bible study — but attempted to explain, “I’m not in the position by myself to go to a black neighborhood and shoot drug dealers.” But through Roof’s own stilted logic, what he had done made sense.

“What I did is so miniscule to what black people are doing to white people every day,” he told agents with the FBI.

When first questioned about the shooting, Roof estimated that he had killed four, maybe five people. “There weren’t even nine people there,” he said in disbelief after an FBI agent told him the total body count.

Now Roof spends most days sitting in a federal courtroom, his eyes cast down as prosecutors detail the mountain of evidence against him. During opening statements, Roof’s attorneys made no effort to argue his innocence. One of the best death penalty lawyers in the country, defense attorney David Bruck, attempted to turn the jury’s consideration to the sentencing phase of the trial, during which jurors will likely decide between execution and life in prison without the possibility of release. Roof still insists upon representing himself during this final phase of the trial. At that point, he may finally get an answer to the question that he posed to FBI agents last year: “What do you think is going to happen to me now?”