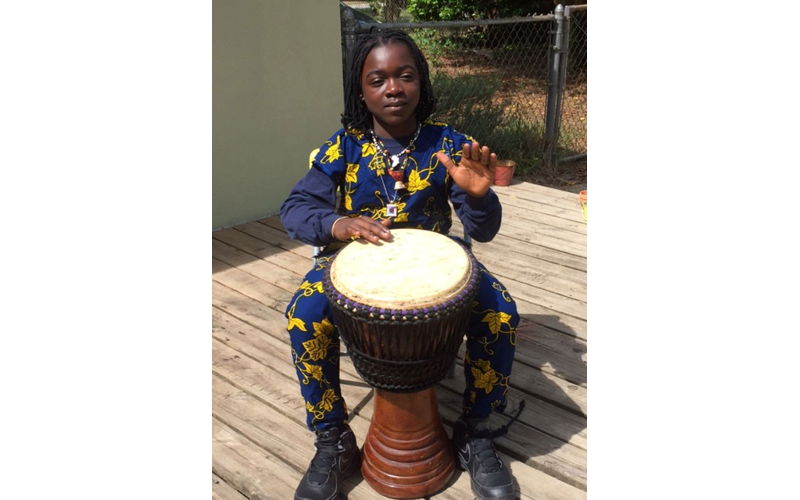 In a sense, Charleston’s Daniel Scruggs has led several lives. He’s a teacher at Mt. Pleasant’s Sundrops Montessori School, but he’s also spent over two decades studying percussion, starting with his time with the Colonial Williamsburg Fife and Drum Corps in Virginia. He’s also a world traveler, having visited Ethiopia and Egypt and living for a time in Yemen. What’s fascinating is that Scruggs has been able to bring all of those passions together thanks to a young boy named Francis Yevuga from a village in Ghana, West Africa.

Yevuga suffers from progressive blindness, and he came to America in 2015 on a medical visa, partially due to the hard work of Project Okurase, a nonprofit organization dedicated to creating collaborative, sustainable, and integrated solutions to help the women and children of Africa build sustainable lives. Their focus is on health and nutrition, water and sanitation, education and technology, building and energy sources, and economic self-sufficiency.

The young boy stayed with Project Okurase co-founder Dr. Cynthia Swenson in Charleston while receiving medical treatment for his illness and attended Sundrops Montessori, where he met Daniel Scruggs. Yevuga, 12 years old at the time, had never attended school due to his blindness and the lack of resources in his village of Okurase, but he’d spent his short life studying with Ghanaian master drummer Dr. Samuel “Powerful” Yeboah. During his 10 months in the U.S., Yevuga and Scruggs developed such a strong musical bond that Scruggs felt compelled to visit Yevuga’s village to spend time with their master drummers. “My time with Francis was the original catalyst that led me to the village, and it opened up some different perspectives,” Scruggs says. “I’d been to Africa a few times but I hadn’t been to West Africa, and being a student of drumming and knowing that the music of a lot of different cultural styles originated there, it was really heavy for me. Being immersed in the drum-making tradition and being surrounded by people playing a really high caliber of music even at a young age, it just really inspired me to want to take my understanding of their rhythms to another level.”

Scruggs also brought along a slew of different donated musical instruments, including a guitar, a bass, a keyboard, and various Brazilian percussion instruments, creating a music resource center in the village. Watching the villagers pick up those instruments and begin to improvise was the image that stuck with Scruggs the most when he returned home. “I realized that most of the people in the village have never been exposed to any genres of music other than their own style, which is traditional West African drum and dance,” he says. “And when they got access to these different kinds of instruments, collaborating with each other and taking the tradition of their style and mixing it with these new tools, it got my mind working about what the next level was.”

The next level, is the Nkabom World Music Festival, a three-day event that Scruggs, Yeboah, and Project Okurase have organized in Ghana from July 21-23. The festival will feature musicians from across Ghana along with a New-Orleans-style jazz band, 504 Supreme, and the the Nkabom Cultural Dance Troupe.

The festival is crowdfunded, with different levels of donors receiving everything from signed festival posters to handmade percussion instruments from the village. Any money not used for the festival will go to Project Okurase’s continued efforts in the region. “We’re making a space for collaboration between a drum and dance company and a New Orleans jazz band,” Scruggs says. “We’re mixing the past, present, and future in this universal language of music.”

Scruggs will leave for Ghana on Wed. July 12, not just to prepare for the festival but to aid Project Okurase with a health outreach program that will provide medical care for up to 200 people a day. One might think that putting together a festival on another continent would be a logistical nightmare, but Scruggs has both a good team and some surprising location-related advantages.”There’s a team of people on the ground in Ghana, and there’s a team of people here,” he says. “And thanks to the health outreach program, there are people who have gone back and forth, so the framework for people to travel back and forth already existed. And it’s really cool because everything is so much less expensive there. This isn’t just me having some vision — it’s more like this idea came about and other people were like, ‘Let’s roll with this and see if it’s possible.'”