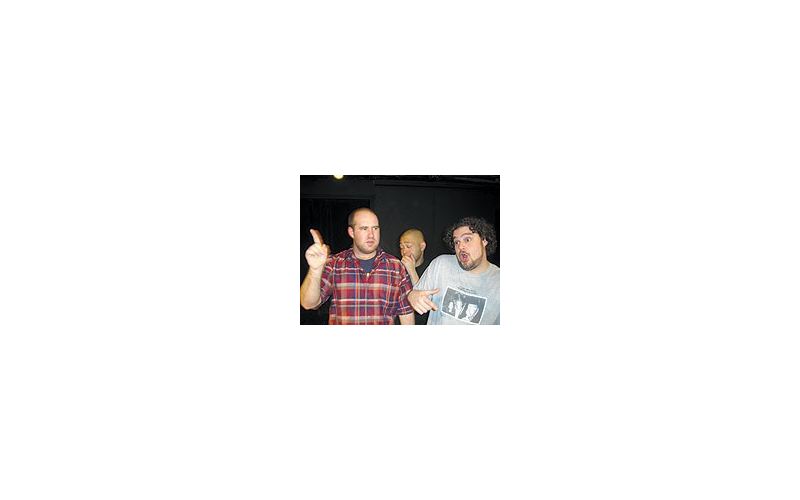 Never Gonna Let You Down: Three-man group returns with a new take on sketch comedy

Appearing like a modern-day Three Stooges (in a good way), Buffoons are NYC sketch comedians who already knocked the socks off Charleston audiences at last year’s Charleston Comedy Festival.

The group grew at the breeding ground for comedy, Upright Citizens Brigade Theatre, where Bobby Moynihan first met Charlie Sanders outside on the street. They later met Eugene Cordero, and so it began.

Character work is a strong part of Buffoons’ newest show Never Gonna Give, which has played before but is now a “morphed” version, according to Sanders. Moynihan and Cordero both have college acting backgrounds, which could help provide stronger character work than other sketch comedy groups.

In the last show Buffoons performed in Charleston, Ready to L.I.E., the guys played the same characters throughout the show (Sanders and Moynihan as versions of themselves, and Cordero as a waiter). In this one, they all play different characters. “Our last show was more premise-based, and this one is more character-based,” Sanders says. Moynihan will play a waiter modeled on someone he worked with at Pizzeria Uno; Sanders plays Charles Pottamus, a man who writes to the Guinness Book of World Records; Cordero plays a hype man for a rap group; and two vaudevillian comedian characters, Scooter and Beef, will also make appearances.

Sanders has appeared in more than 40 sketches on Late Night with Conan O’Brien (as a Mr. T mummy, a flasher, a cue card guy who wrote himself into the show, and most recently as the hiker with the twisted ankle in the skit “The Strange Ranger”). He began performing sketch comedy and improvisation in high school.

The group’s sketches, they explain, are often influenced by and formed out of improv. They also improvise within the sketches while performing. “We try to crack each other up,” Sanders says.

Buffoons have adopted a certain tradition with the use of props in their shows. In their first show, Moynihan says, they realized they had used a prop in every sketch, so at the end they decided to destroy all the props on a lark. The move stuck. “It gets us into trouble, because we have to buy new things for every show,” Moynihan says, explaining that one year, they used (and destroyed) two large cakes per show; at the end of the year they calculated that they’d spent more than $1,500 on cakes over the run of the show.