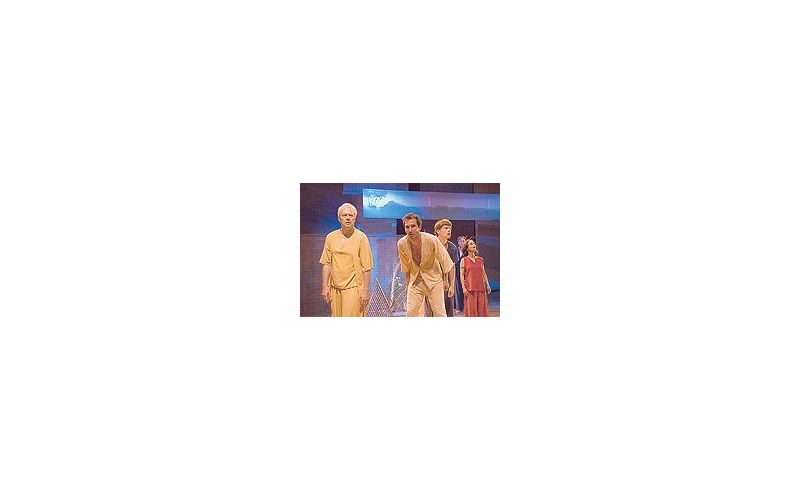 Whether it’s samurai or out-of-work gunslingers, the story of seven warriors devoted to their craft who come together to protect a village has been made, remade, and written into everything from Star Trek to The Simpsons. Maine’s Beau Jest Moving Theater recognized that trying to duplicate stunning scenes like a horizon full of horsemen appearing over a ridge in The Magnificent Seven wasn’t going to happen on a small, low-budget stage, so they put their heads together to come up with a new angle.

In the original Seven Samurai, the warriors decide to defend a village for nothing but bowls of rice. Samurai 7.0 director Davis Robinson sees a parallel between that and getting a group of actors together, devoting “months of hard work for a beer in the end.” The storyline is a hodgepodge mix of the various stories, including the seven recruits for the play, among them a cowboy and an actress from Seven Brides for Seven Brothers.

“This play is as much about the magic of theater as it is about telling the story of the seven samurai,” says Robinson, who incorporated quotes from Henry V and A Midsummer Night’s Dream into the script. “We use the good old-fashioned technology of Shakespeare’s days, like hand props, puppets, and our voices, to create magic.”

Samurai 7.0‘s goal is to engage the audience’s imaginations in the magical world that theater creates. They’ve been successful thus far, garnering a nomination for New England theater’s prestigious Elliot Norton award. The casts’ biggest challenge has been determining how to utilize moving picture techniques like crossfades, camera angle changes, and jump cuts in a stage presentation. The result appears to be free of the campiness that retelling a classic film story on stage could potentially convey, instead presenting an original and amusing yet heartfelt rendition of a powerful tale. —Stratton Lawrence