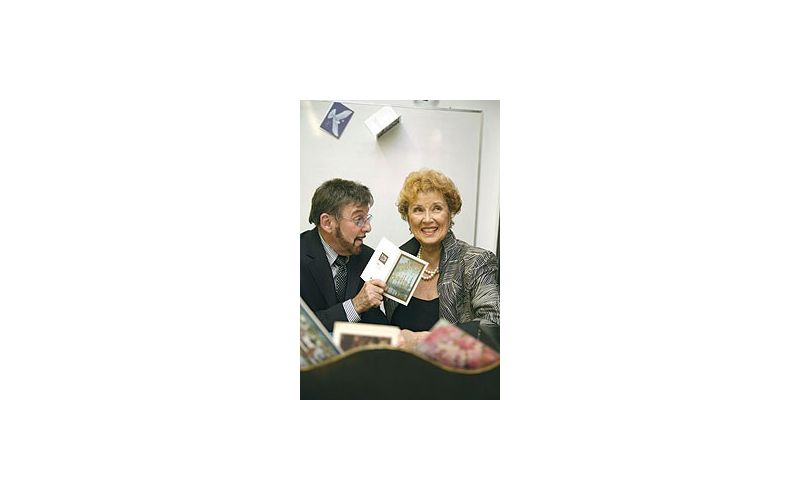 I Think I Love You: Local actors delve into a long-distance love connection

Two distant lovers, unable to connect in person, set the theme of A.R. Gurney’s 1998 Pulitzer-Prize nominated epistolary play Love Letters. Only through their written correspondence, which takes them from early childhood through middle age, do they share their lives, hopes, and feelings. Robert Ivey, a College of Charleston professor, directs and stars in the Stelle Di Domani production, along with Nancy Stedman.

Ivey and Stedman are long-time friends who have collaborated on many Charleston productions, including Hello Dolly! and Fiddler on the Roof. The pair once performed together at Radio City Music Hall, and it was friends from New York who recommended they tackle Love Letters. “It’s a long friendship and a good friendship,” says Ivey.

Ivey has acted in Love Letters before — 12 years ago in Texas with his ex-wife; this will be Stedman’s first time. The play has been a vehicle for many famous couples, including Paul Newman and Joanne Woodward, Barbara Eden and Hal Linden, and even Sarah Jessica Parker and Matthew Broderick. “I think its market value has been in the past to pick big celebrities to do it — husband-and-wife teams. But it wasn’t originally done that way, and sometimes it still isn’t, and I’m hoping that will work here,” says Ivey.

The play has been called poignant and heartbreaking, yet also “a modest achievement” (in a 1989 NY Times review). The characters of Andrew Makepeace Ladd III and Melissa Gardner have been considered universal by some and too WASPy to stomach by others. Both come from privileged backgrounds but take different paths, with Andrew becoming an Ivy-League politician and Melissa, a self-destructive artist.

“I do think you have to be very careful,” Ivey says. “Gurney did write from an elitist background… but he tries to make a contrast between Melissa and Andrew because Melissa is overly wealthy and Andrew has had to work for things.” He notes that he and Stedman are avoiding playing the characters as Gurney’s typical New Englanders, and “playing them as more middle-class people.”

Gurney began writing the letters as an exercise to help him learn how to type on a word processor, and the play grew from there. The setup is simple enough: the two actors sit at desks and read. Andrew reads his letters to Melissa, and she reads her letters to Andrew. Ivey says he’s respecting Gurney’s specific directions in the text of having the actors not look at each other. He’s even carrying that into his directing, holding rehearsals in his mirrored studio where he watches Stedman in the mirror and listens to her. He gives her direction without the two of them making eye contact, and has her do the same with him. After all, says Ivey, the play is all about listening.

Aurélia Thierrée’s reputation precedes her. As the granddaughter of Charlie Chaplin, Thierrée’s performances inevitably draw comparisons to her predecessor. In her starring role in Aurélia’s Oratorio, a production which even Thierrée calls (in her slight French accent) “very difficult to describe and categorize,” her physicality, expression, and whimsy often get pointed out by critics as […]