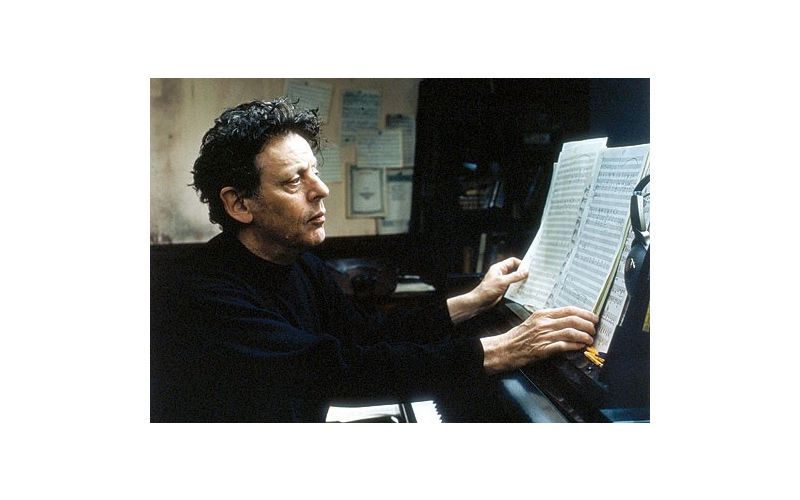 Spoleto programs this year do not exhibit a design or a piece of art on their covers. Instead they display a face. Philip Glass has literally become 2007 Spoleto’s poster boy, and a 1969 hyperrealist portrait by Chuck Close of the composer can be seen in every corner of Charleston, from downtown shop windows to posters and tourist paraphernalia.

This could be because Glass’s piece of experimental theatre Book of Longing, which employs the poetry of Leonard Cohen, is one of this year’s festival offerings. It may also be because Philip Glass has somehow become the embodiment of a new artistic consensus, a style that permeates several artistic disciplines from theatre to painting.

Though Glass himself detests the term, and rightfully so, he and a small group of New York artists share a similar vision, a stylistic trend referred to as minimalism. In actuality the term should more properly be reductionism and dates back at least to the plays of Samuel Beckett if not to Picasso’s late periods. It also has roots in primitive art and music. Minimalism is a desire to return to the basics, the core of artistic expression. It is a stylistic need to remove complexity and clutter and sometimes issues of emotion and identity from art.

In his famous Harvard lectures, the Poetics of Music, composer Igor Stravinsky discarded the notion that a musical composer should work from a framework of emotion. Since emotional reactions to a piece of music will undoubtedly vary from listener to listener, it is impossible for a work of music to set out with emotion as an organizational principle. Stravinsky’s late work was in many ways reductionist, though never minimalist in the late 20th century sense of the word.

Steve Reich, another New York composer and early colleague of Glass, in seeking an explanation for minimalism and the minimalist movement in music, has expressed that Arnold Schoenberg, the German composer who created (or discovered) atonality, and others threw up a wall in music, a wall of complexity and intellect, between music and its listening audience. Reich felt that minimalism should set out to break that barrier down and bring music back as a more accessible medium. These egalitarian feelings inspired collaborations between composers like Reich and Glass and pop, folk, and world music composers and performers. There was an attempt to redefine music and art from the perspective of late 20th century pop culture and many of the sophistications and elitist paradigms of the classical world no longer seemed to apply.

It is also possible to consider, Reich’s theory aside, that Schoenberg and other 20th century composers usually regarded by the minimalist hard liners as creating a wall of alienation were not really themselves responsible for the existence of this wall.

As the 19th century came to an end, Western European music had reached a meltdown point of complexity. It was assumed that audiences would maintain a high level of musical education and sophistication and a sheer love for the art that would allow them to keep up with the developments. Unfortunately, the advent of new technologies — radio and recording — made music a commercial enterprise. The beginning of the 20th century saw the birth of mass culture based not on the tastes of an educated elite but on the whim of the woefully-uneducated and exploited working class. The gap between the so-called classical world and the pop world was born, mostly because of the profit motive and because America’s interests were primarily economic and not artistic. Music became more of a commodity and less of an art form.

The minimalists in music led by Glass sought to take music away from the dissonant complexity where the late 20th century had dropped it and to a more consonant approachable realm. Glass, who spent some time transcribing Hindu music, was far more fascinated by what he found there and in theatrical experimentation of the mid-20th century than by the continuing complexity in the European world where composers like Boulez and Stockhausen were in vogue. Though his education was grounded in European sources, particularly through teacher Nadia Boulanger, who taught many American composers in Paris following the second World War, Glass was looking for a different approach, one that made more sense in the burgeoning metropolitan-global cultural milieu of the ’60s and ’70s.

This year’s Spoleto festival collaboration of Glass and Cohen, a Canadian singer-songwriter, poet, and novelist, is a perfect fit. Both have walked that undefinable area between pop and serious art (as if the two could be classified as exact opposites) and both have tried to forge new directions. They are both from that same older boomer generation disenchanted with an elitist idea of art but unwilling to sell out to sheer commercialism. Cohen’s poetic song “Hallelujah” has crossed over many boundaries, even ending up in the recent animated movie Shrek. This success is one of the signs that minimalist or reductionist art may have a shot — at least in the area of cash profit.

But the jury is still out and it remains for the new century to accept, reject, or perhaps ultimately neglect the minimalist trendsetters. Undoubtedly they have had a great impact. But in many ways minimalism has created a kind of elitist and exclusionary art not unlike the alienated and alienating composers of the early-and-mid-20th century. It has created a certain tyranny of thought that is not open to concepts outside the purview of its philosophical parameters. As such it is in danger of becoming too dogmatic and faithful to its own artistic principles. In some cases it has placed a greater emphasis on how art is made, on the conceptuality of it, as opposed to how it is received or perceived. Certain approaches are considered hip and correct while others are not. The cult of personality is highly cultivated sometimes at the expense of content or artistic integrity.

For the moment Glass has evolved into an icon, the darling of so-called groundbreaking trends. Until something newer comes along, the icon may still hold up even if it is already a bit frayed around the edges. Are we heading into some new era? The post-post-post something or other. Maybe the poster boy for that movement isn’t born yet, but hopefully, when he comes of age, Spoleto will still be around to put his image on the streets of Charleston.

A Glass of Vintage Cohen Book of Longing puts Glass’ music in a whole new context The chance to cover this one took me by surprise, as I didn’t think I’d be reviewing it. But a family emergency caused the City Paper’s first assigned reviewer to miss Wednesday’s festival opener of Philip Glass’s Book of […]