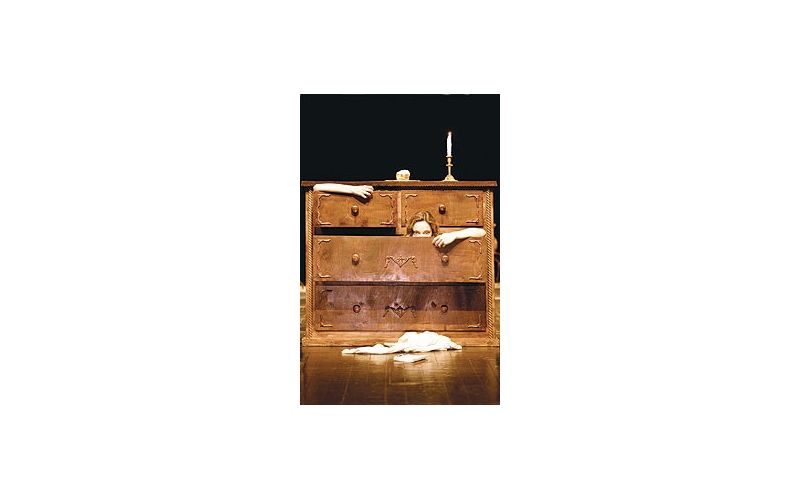 Land of Confusion: A topsy-turvy dreamscape provides a playground for French circus family

Aurélia Thierrée’s reputation precedes her. As the granddaughter of Charlie Chaplin, Thierrée’s performances inevitably draw comparisons to her predecessor. In her starring role in Aurélia’s Oratorio, a production which even Thierrée calls (in her slight French accent) “very difficult to describe and categorize,” her physicality, expression, and whimsy often get pointed out by critics as evidence of her lineage.

Thierrée emphasizes that out of respect and admiration for Chaplin’s art, she tries to always separate his work from hers. “I really want to make the distinction — it’s two different worlds.” She points out that she never really knew Chaplin. “It’s been magical to know I’m related to him, but it’s my life and it’s completely different.”

The different, difficult-to-categorize world of Aurélia’s Oratorio was created by Victoria Thierrée Chaplin, Aurélia’s mother, who directs and has a hand in the choreography, sound, stage, and costume design. She, along with husband Jean-Baptiste Thierrée, pioneered the New Circus movement with the creation of Le Cirque Imaginaire in the ’70s.

Aurélia and her brother James grew up starring in their parents’ shows. Continuing in this vein of work is “our way of staying together,” says Aurélia. The siblings often work the same circuit with their own shows, but have yet to collaborate. Mother Chaplin always has a hand in their projects, be it directing, writing, designing, or constructing sets and props.

Thierrée says she’s combined all her training for this production, which was first formed four years ago. “I’m not an athlete, I’m not a dancer, but there’s a bit of everything in it,” she says.

As for the story behind Oratorio, Thierrée explains, “You know when you dream and something absurd happens, and you decide to go along with it, and then you wake up and realize that it was ridiculous?” The play presents a dream world, and Thierrée is like us, being involved in our dreams and then coming to.

“I was trying to go with the logic of dreams. It’s a series of tableaux and we go with the logic of each tableaux.” She mentions that there is a story line, “an open narrative,” and finds it curious that various countries’ audiences have responded differently. “The story is in the mind of the person watching it, but the story is there. It’s just up to you to find it.”

In Norway and Brazil, every audience member that came to her and mentioned the story had understood the plot Thierrée had in mind. In England, they didn’t see a story. “It’s been interesting. We’ll see what happens here.”

With its mix of light-hearted whimsy and dark humor, Aurélia’s Oratorio has been lauded for appealing to both children and adults. “I think that’s because it deals with imagination and dreams and the subconscious,” says Thierrée. She notes that the production is a collaboration with the audience, and that while adults may be a bit more cynical than imaginative children, the handmade props are easy for adults to understand. “But there’s a moment when they can decide not to try to figure it out,” says Thierrée.

Judging by the rave reviews, it seems people are opting not to let the mysteries go unsolved.