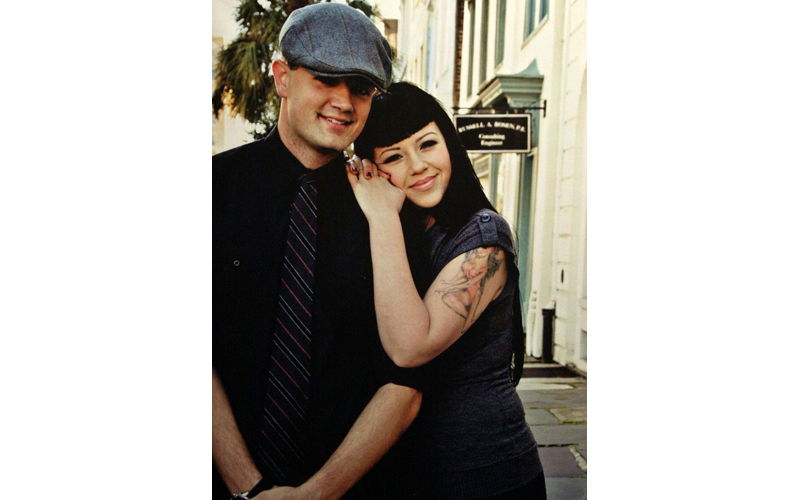 Mike Vaughan takes a pensive pride in describing his daughter, Casandra Vaughan Perkins. It’s a bright but solemn afternoon, three weeks after Perkins was buried, and Vaughan shows off pictures of his daughter, his middle child, that decorate nearly every surface in his home. In the photos, her smile is ever present. “There’s a hole in my heart and a hole in my house,” Vaughan says. “My life is gray, doesn’t have much color anymore. She was the colorful one.”

Prior to taking her own life following a torturous struggle with postpartum depression, Perkins was a confident girl who loved to go antiquing with her father, make art, take care of animals (she was a vet tech), and get creative with makeup (she was a certified MAC beautician). Perkins suffered from what she herself described as unrelenting postpartum depression (PPD).

The mother of a nine-month-old boy named Bronson, she detailed her struggles with PPD over the past year when she took to the fundraising site GoFundMe to raise money for her child’s health bills just a few days before her death on February 7, one day after her 26th birthday. She named the page “Bronson the Brave” after her son, explaining her traumatic 16-hour labor and Caesarean section, the complications Bronson experienced thereafter (he had several cranial defects), and the sea of financial concerns that overwhelmed her following her son’s birth. The medical bills were too high to even comprehend, and so Perkins, her husband Miles, and Bronson moved in with her father. “We got married in the living room,” she wrote, “never went to Ireland like we dreamed of for a honeymoon, but our life revolves around B.”

Soon after her passing, news of Bronson the Brave spread. Eighteen days after the posting, the page had generated over 1,600 Facebook shares and helped raise $20,000, a kind reminder of how deeply Perkins was loved by her family and friends.

For many mothers, it’s not uncommon for them to feel far from euphoric after the birth of their child. One in seven go through postpartum depression, and even more experience the so-called baby blues. “The baby blues is very common. About 80 percent of women will have that for a couple of weeks after having the baby. They feel a little sad and they cry, just from that hormonal shift. But that goes away when the hormones get back in line and balance themselves out,” says Holly Fisher, president of Postpartum Support Charleston. “But if a woman is continuing to have those symptoms, if she’s feeling worse, feeling depressed, feeling changes in sleep and appetite, feeling a lot of guilt over her feelings for up to a year or so after birth, then those are signs of PPD. Some women will have thoughts of either harming themselves or their child. So if those are going on past the two-week mark, that’s a pretty good sign that something else is going on and treatment should be sought.” Fisher knows all of this firsthand. She also suffered from postpartum depression.

After having her daughter in 2008, Fisher suffered for nine whole months before seeking help. “I was embarrassed. I didn’t want to say anything,” Fisher admits. “People think that when you have a baby, you should be over the moon and so excited. They don’t want to hear me say, ‘I’m not lovin’ this.’ That’s not something you’re comfortable admitting, so you just try to hide it as best as you can.” In the end, she was lucky. She found the right people to help her.

And it was that experience with PPD that led her to volunteer for Postpartum Support Charleston a few years ago. “It helps me make sense of what I went through,” Fisher says.

Postpartum Support Charleston was founded 14 years ago after founder Helena Bradford’s own daughter, Ruth Rhoden Craven, took her life after silently suffering from postpartum depression. The triggers for such tormenting PPD could be hormonal or clinical, anything from genetics to external factors like financial difficulty, stress at home, or a sudden and traumatic change in labor or delivery.

“Our main issues are to bring awareness of PPD and postpartum anxiety to the general community to women and new moms, and also to the medical community to make sure they understand how to recognize it, how to treat it, and what they can do to help,” Fisher says.

The foundation also offers grants to some low-income families and works closely with local psychiatrists and psychologists to ensure more women are getting properly treated. Postpartum Support Charleston also provides one-on-one support with volunteers who have experienced postpartum depression to help sufferers realize that one day they will return to their pre-PPD selves.

”Before the baby, she was always happy, vivacious. She was the happiest pregnant lady I’ve ever seen,” Perkins’ father recalls. “She was really a go-getter right after the baby was born and hyped up, but after a month she just told us, ‘I feel horrible; I’m having bad thoughts, thoughts of killing myself.’ So we took her to a doctor, but I don’t think they really know how to treat it.”

It’s easy to see why he would think so. In the months before her death, Perkins saw therapists and psychiatrists. She was prescribed Zoloft, Zanax, Klonopin, Ambien, and Wellbutrin, spending a foggy eight months at war with post-traumatic stress disorder (caused by a prolonged delivery and an anesthesia-free C-section) and then postpartum depression. She even checked herself into a medical facility the week of her death. It’s easy to see why Vaughan feels that PPD is misunderstood and often mistreated.

Psychologist and Postpatrum Support Charleston staffer Risa Mason works with area medical professionals to make sure that postpartum sufferers receive the support and care they need. “PPD is definitely more common than we realize because doctors don’t really warn their patients about it,” Mason says. “I don’t think pediatricians who are seeing new moms and OB-GYNs who see women during pregnancies are doing a whole lot of talking — not as much as we’d like. As a foundation we’d like to see more medical care providers preparing women, saying if you do find that you’re extremely emotional or you’re not feeling like yourself or something is not going right, please let us know because help is available, and you don’t have to suffer by yourself. It could be nothing or it could be something that needs treatment. If they’re not feeling comfortable with the baby, or they’re not feeling any feelings for the baby, then it may be more than meets the eye. So we are trying to educate family members and medical care providers to ask the right questions so that we can avoid tragedy.”

In rare cases, some new mothers experience postpartum psychosis, a condition where women may lose touch with reality and experience hallucinations or delusions. But even this more severe condition is completely treatable by a psychiatrist with medication and therapy.

“Intrusive thoughts are things most people don’t want to talk about,” Mason says. “They’re very disturbing thoughts and images of something happening to the baby or causing harm to the baby. These thoughts come and go, and they’re very frightening. It doesn’t mean they’re psychotic or that they will act on these thoughts. It just means they’re having a lot of anxiety. But once they have these thoughts they become terrified of them, and that’s when we think about medication because of the level of suffering going on, and there are medications that a psychiatrist can prescribe that will help women with these thoughts enormously.”

To learn more about Bronson the Brave, go to gofundme.com/bronsonthebrave. Postpartum Support Charleston is always on the lookout for more volunteers; you can also assist with their Moms’ Run on May 10. For more information, visit ppdsupport.org or email momsrun@ppdsupport.org. You can also support and celebrate Bronson by buying one of Lowcountry Lauren’s seasalt chocolate chip cookies available daily at the Terrace Theater, or by attending the Cassie Vaughan Perkins Benefit Show May 18 at the Tin Roof, West Ashley.

Far too many mothers suffer from postpartum depression in silence