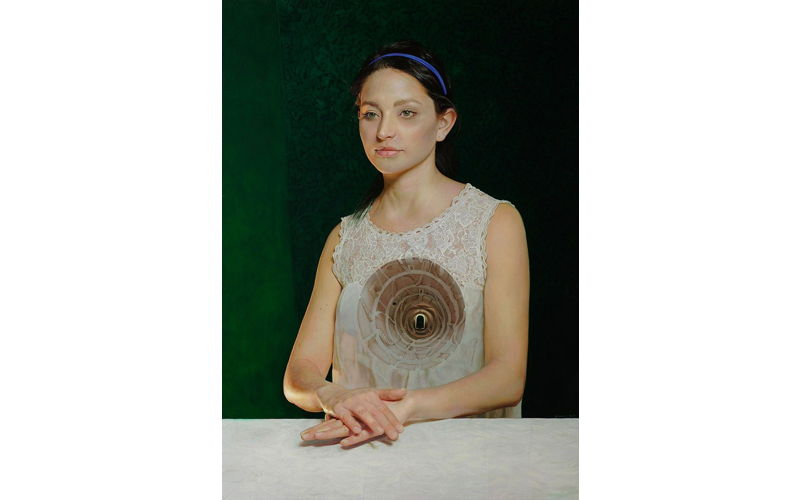 How does an internationally renowned artist from Poland end up opening an exhibition in our neck of the woods? It turns out Anna Wypych’s journey has been a long one.

Physically, it takes her about 15 hours of flight time to get here from her home in Gdynia, Poland — that’s not counting layovers along the way. But biographically, Wypych’s professional journey goes all the way back to her childhood when, to her parents’ dismay, she began taking her paintbrushes to the walls. “My mother figured out that there should always be enough paper around me and the walls would be much safer,” she says.

Wypych has showcased her vivid, realistic oil portraits in cities at home and abroad, but Secret Project is the biggest professional solo exhibition she’s ever had. Charleston’s reputation as a destination for fine art reached Wypych all the way in Poland, and when she stumbled upon Principle Gallery online a few years ago she realized they already worked with many artists she admired. The gallery primarily works with artists who produce highly realistic figurative art, so she thought she’d be a great fit. “I wanted to paint something spectacular, and then write to them,” she says. “They were quicker, and wrote to me first.”

Secret Project is a series of portraits completed over the past year that represent secret inner thoughts at the most mundane moments of everyday life. Wypych paints portraits of universal feelings and experiences, she says, rather than particular people. “My paintings are about happiness, home, confidence, and inner strength,” she says. All the paintings in Secret Project were composed with oil paint on either canvas or wooden panel, and it’s almost unbelievable the level of detail Wypych is able to achieve — they look more like photographs than paintings.

Other works are more whimsical, though. Wypych has models pose for the photographs she paints from, but she edits the photos on her computer before she paints to add new, often fantastical, elements. For example, in “Sea Color” the subject appears to have an endlessly deep cavern in her chest right where her heart should be, and delicate, lace-like orbs float around the subject’s body in “Symbiosis.” Many of Wypych’s subjects are nude or partially nude, depending on the idea or emotion she is trying to convey. Sometimes she needs the body to be in its purest, most vulnerable form, but other times she feels a special fabric, like the lace in “Sea Color,” communicates her vision best.

“I paint mostly women because I am one,” Wypych says. She hopes her messages are universal, even though her paintings originate from her own inner thoughts. “I just use my own female voice,” she says, but she’s open to broadening the scope of her work and painting more males in the future.

She’s had many successes in the last few years, but Wypych didn’t become a realist visionary overnight. She’s been pursuing her artistic career since high school, where she completed an art program that left her with an extensive portfolio upon graduation. She set up her first public exhibition when she was just 16 through a club that promoted young artists. Though the exhibit went well, Wypych says many people had trouble believing that she, a “fragile, small girl,” could have created such powerful pieces of art.

Following high school graduation, Wypych had hoped to get a scholarship to her dream art school, but she ran into a roadblock. “To qualify to get free studies in Poland, you have to pass very difficult exams and beat dozens of other candidates,” Wypych says. She failed on her first attempt, but she was determined to make it happen. A year later, she finished in first place with the highest number of points on her exams and started at the Academy of Fine Arts in Gdańsk, Poland.

But as most artists could tell you, becoming successful in your craft isn’t just a matter of obtaining a degree. After receiving her Master of Fine Arts in 2011, Wypych worked hard to get her work in as many galleries as possible — from Poland, Italy, France, and the UK to Knoxville, Tennessee, New York City, and, eventually, Charleston. One of Wypych’s most treasured achievements is having her “Self portrait with tattoo” accepted into the European Museum of Modern Art’s permanent collection. “It was my first museum and wind for my wings when I needed it so much,” she says.

It took a while to get here, opening her first American solo exhibition, but Wypych is excited to be visiting Charleston for the first time and sharing her work with the community. The portraits in Secret Project are sure to elicit an emotional response, even if you can’t quite put your finger on what emotion it is. And that’s exactly what she’s going for. “I like to think that art is something special, which directly affects our soul and can stir up something hidden deep in us,” Wypych says. That’s why she wants people to come see her exhibition: “Maybe you will find something special for you there, something which will touch you.”