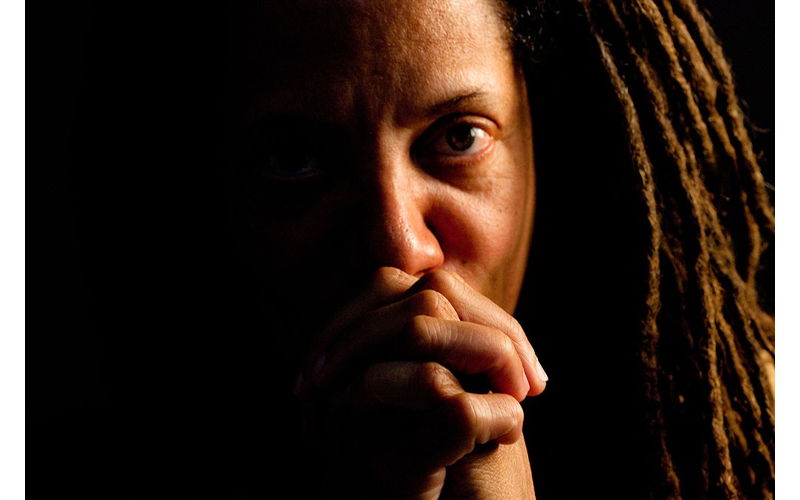 South Carolina poet Nikky Finney hadn’t planned on writing an acceptance speech for the National Book Award dinner in 2011. Her book Head Off & Split was among the five nominees, and honestly, she didn’t expect to win.

However, a few days before the awards dinner, Finney was giving a talk at a high school in Massachusetts and one of the students wanted to know about the 1739 slave codes of South Carolina. Finney came home from the event, pulled up her files on the codes, and realized this could be the foundation of her acceptance speech. The result is part thank you speech and part spoken-word poetry, and begins with this line: “A fine of $100 and six months in prison will be imposed for anyone found teaching a slave to read, or write, and death is the penalty for circulating any incendiary literature.”

“The speech was about bringing my ancestors with me. They gave their lives for me so I could dream of a life as a poet,” Finney says. The speech went viral and her email box began filling up with letters from people all over the world who responded to the story of overcoming oppression.

Born in Conway, Finney moved with her family to Sumter when her father, a Civil Rights attorney, was recruited out of law school. As a curious and quiet young woman growing up in the South in the ’60s and ’70s — what Finney calls “a dangerous time” — she recorded her thoughts in a journal to help her “understand the craziness in the world.”

At age 15 she fell in love with the work of poets James Baldwin and Toni Cade Bambara. From Baldwin she learned that the poet is someone who reminds society what it means to be human. “I want to build worlds with words,” she says of her poems, which examine historical events and are described as “artful and intense.”

In her poems we see Condoleezza Rice running on a treadmill in the early hours of the morning, Strom Thurmond dancing with women at Finney’s brother’s wedding, and Rosa Parks as a 42-year-old seamstress. Her poems explore the telling details of larger-than-life events and people. We see that Rice, Thurmond, and Parks are like us — people who sweat, dance, and sew. In “Red Velvet, (for Rosa Parks, 1912-2005),” Finney writes,

You do a lot of thinking with

a thimble on your thumb. You have hemmed

in Montgomery. You have let the hem out of

Over the last three years, Finney has traveled across the country giving readings and talks. She says it’s her responsibility as a poet to join the conversation.

Currently, she is in the “writing season,” which means she gets up every day at 4 a.m. to write. She goes directly from her bed to her chair and writes in what she describes as a dream state until 8 a.m. “My body gets up, but my mind is still kind of wavy and the reward is huge.”

Asked whether it was difficult to begin writing again after receiving the National Book Award, Finney said the three years of speaking engagements have been good for her, calling the hiatus “a long dance with the award.” Now that she’s back to writing she can leave the accolades behind.

After 40 years of writing she is still writing to understand the craziness. “I’m still amazed that a young black high school student can be treated like a rag doll by her teacher. No one took the time to get to find out what was going on with her, yet Dylann Roof gets taken to Burger King because someone knew that he was hungry,” Finney says. “I ask myself how do you make sense of this? You write about it. James Baldwin said that this is the work of the poet. Let the poet come in and remind us that we are all in this together.”