Plan ahead to get the most out of your Brewvival experience 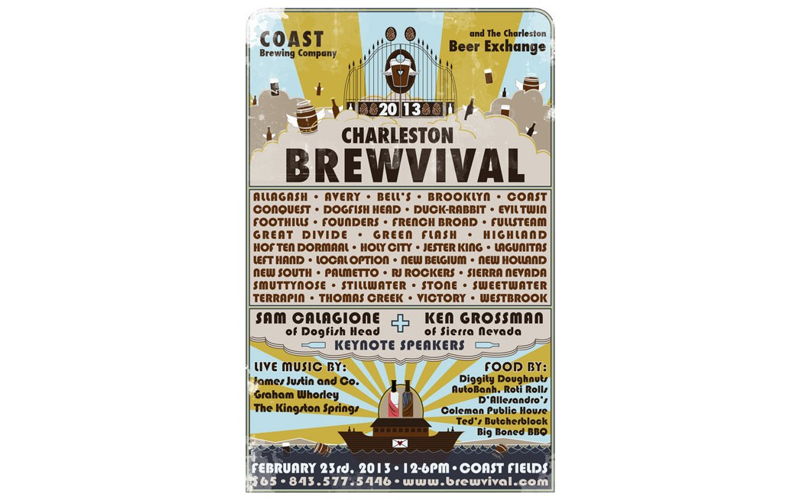 It’s time for craft beer enthusiasts and amateurs alike to seek out a beer lineup that’s truly one-of-a-kind. It’s time for a handful of funky wild brews, a plethora of barrel-aged rarities, and dozens of hopped-up ales. It’s time for the craft beer community to stand together in one place to enjoy a day full of music, food, good company, and top-notch craft beer. It’s time for Brewvival.

This will be the fourth installment of the coveted Southeastern craft beer festival, and COAST Brewing Company and Charleston Beer Exchange have taken a few steps to make sure this year is the biggest and best yet. And by biggest, we don’t mean more people. In fact, the number of tickets sold went down from 2,500 in 2012 to 1,800 in 2013. This means shorter lines and more beer to go around. In fact, Brewvival 2013 will offer 130 unique beers, making it the biggest Brewvival yet.

And what’s a festival without good music? Justin James & Co., Graham Whorley, and The Kingston Springs will be popping out some tunes throughout the day.

If there’s one bit of advice we can give, it’s to get there early. This year, Sam Calagione of Dogfish Head and Ken Grossman of Sierra Nevada will be preaching to the crowds. These guys are pioneers of the craft beer industry and should be a treat to hear.

And about that ridiculous beer lineup. With so many beers and so little time, it’s good to have a drinking plan for Brewvival. Here’s what will be marked on our map:

Avery’s barrel-aged series is one that we rarely see around these parts. The beers are produced in small batches, most only being released at the brewery in Colorado. Two years ago, we were fortunate enough to attend a beer tasting hosted by Adam Avery at Voodoo where we got to try Dihos Dactylion, bottle No. 7 of the series. Now, Odio Equum, the latest in the series at No. 13, is making its way to Brewvival. We got to sample this beauty at the Great American Beer Festival, and you don’t want to miss it. All you need to know is it’s a sour ale brewed with raspberries and aged in Sauvignon barrels for a year.

There isn’t much info about Stone Brewing Company’s latest creation, but we do love a good Saison, and Stone rarely disappoints. Aside from the tasty Saison Du Buff and The Perfect Crime, Stone generally doesn’t brew the Saison/Farmhouse variety. Given that this is their first solo Saison gig (the other two were collaborations), we’re excited to see how it turned out.

Bell’s always bring their best beers to Brewvival. Last year’s decadent Black Note killed it, and the cask of Hopslam was gone in no time. This year, be ready for a beer that’s been sitting around for a while. Batch 9,000 was an impressive, big time imperial stout (12.5 percent a.b.v.) that was released in late 2009/early 2010, and they’ve made that kick-ass beer even better by aging it in bourbon barrels. Expect a full-bodied, rich beer with flavors ranging from chocolate to dark fruits, and some lingering vanilla and bourbon.

We’re extremely excited that Conquest Brewing Company is helping elevate the craft beer scene in South Carolina by becoming Columbia’s first modern brewery. We’ve been hearing nothing but great things about their beer, especially the Sacred Heart IPA. Based on a few reviews out there, we can expect hops to take center stage, offering up big tropical flavors like pineapple and mango. It will be hoppy, but not overbearing, and very approachable. And if that’s not enough, Conquest is bringing a firkin of Sacred Heart that’s been double-dry hopped with Citra and infused with mango and papaya. If it’s as good as we’re expecting, we’re in for a treat.

Is it presumptuous to assume that a beer named after the brewmaster would be nothing short of amazing? We’d hope so, especially when Green Flash’s very own Chuck Silva is the man behind this double stout aged in bourbon barrels for 18 months, filtered, and then blended with fresh double stout. This one is hard to get a hold of, so the anticipation is killing us.

All of Jester King’s beers

We couldn’t help ourselves. We’re so excited that Jester King is coming up from Austin, Texas, to partake in Brewvival that we couldn’t choose just one of their beers, so we’re listing them all: Le Petit Prince, El Cedro, Das Wunderkind!, Funk Metal, RU-55, and Boxer’s Revenge. The term “craft” is an understatement for Jester King’s beer. They’re pulling water out of a well on the brewery property and using local ingredients such as natural yeast from the Texas Hill Country to create one-of-a-kind farmhouse brews. We got a chance to sample a few last year, and they are spectacular. Half of them are organic and most are barrel-aged with the use of wild yeasts and bacteria such as brett, pedio, and lacto. Expect a lot of citrus fruits, oak notes, and barnyard funk.

When Westbrook and Charleston Beer Exchange get together to brew beer, they go big. So far, we’ve had the pleasure of trying two variations of the super hoppy, fruit-forward Citrus Ninja Exchange. Both were fantastic, with the most recent version barely ousting the first. Now, we get to try a strong, dark ale that’s been sitting in Laird’s Apple Brandy barrels with a bunch of wild yeasts and bacteria for over a year.

Evil Twin’s Jeppe Jarnit-Bjergsø is based in Denmark, but he makes his remarkable beers at various breweries around the world in a practice known as “gypsy brewing.” Last year, he brewed a batch of Biscotti Break at Westbrook Brewing Company and added a cured Iberico ham shoulder two months before unveiling the treat at Brewvival. This year, he’s taking a monstrous porter, Lil’ B, adding some wild yeast strands, and aging it in brandy barrels. Say what? Yeah, don’t expect to find this anywhere else. It’s a Brewvival exclusive.

Any time New Belgium releases a beer that involves the blending of Love, one of the two oak-aged sour ale bases, everyone should drink it. In this case, the lighter of the two sour bases, Felix, was blended with the fruit-forward Prickly Passion Saison, and the two spent five months in a peach whiskey barrel together. Expect sweet malt, oak, fruit, and a little bit of tart funk to dance on the palate with this one-of-a-kind brew.

Visit brewvival.com and facebook.com/brewvival for a full lineup of beers and make your own tasting map.