The Life of Pie 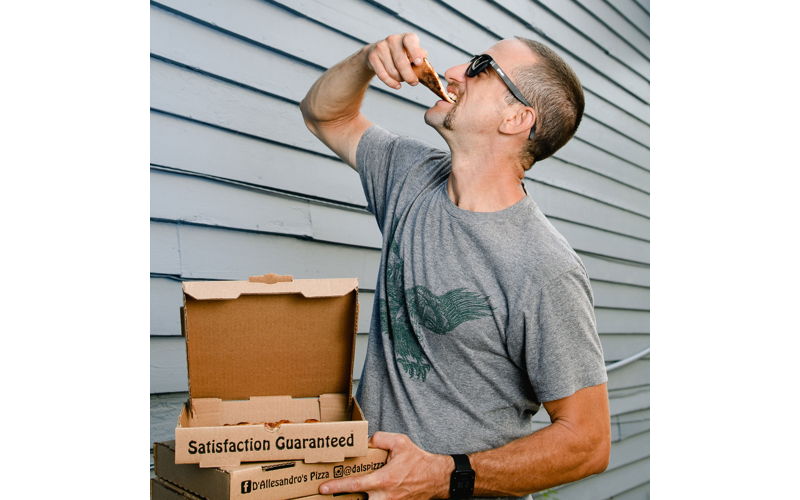 “Is it OK if I eat pizza during the interview?”

While most people only dream of being around pizza all the time, this dream is a reality for Nick D’Allesandro, owner of D’Allesandro’s Pizza alongside his brother, Ben. In the back of his pizza parlor he pulls a slice away from his freshly baked pie. It’s day 100 of D’Allesandro’s personal challenge: eat pizza every single day for an entire year.

“So I was kind of thinking of dumb ideas, I don’t know why. I was bored, thinking what could I do as a personal challenge?”

D’Allesandro explains a few ideas he had before he settled on his current endeavor: riding his bike every day, riding to every pizza shop in Charleston, and making YouTube videos of the aforementioned. Ultimately D’Allesandro decided, “I could just try to eat pizza every day for a year. It was our anniversary for the pizza shop coming up so I was like, that’ll be a good day to start. I guess I was just throwing the idea around and — it seemed like the easiest torture method for myself.”

Owning a pizza restaurant does give him a leg up in the challenge as his access to slices is much easier and cheaper than the average pizza lover’s. “The thing is that I already ate pizza like three or four days a week, so the hardest part of it has been planning, adding it in,” D’Allesandro says. “I’ve been eating it for breakfast a lot. I just kind of come down here and eat a pizza first thing in the morning just so I can bang it out.”

His pizza consumption isn’t limited to his own shop, but it is no doubt his first choice when it comes to his daily pizza meal. “I don’t want to eat at a different place every day, it just costs too much. I try to eat at other places. It’s just hard to do it when you own a place.”

So is D’Allesandro sick of pizza? Not in the least. “The only thing I’m sick of is forcing myself to do something. It’s like forcing a routine, I have to do it.” With a variety of toppings and options at the St. Philip Street shop he can change up his meal often. On day 100 he whipped up a feta and jalepeño pizza but mentions that recently he’s been making an unconventional meal. “I’ve been making one with banana on it — ricotta base with bananas and honey — and that one’s actually really good. People think I’m crazy for eating it.”

With a pizza oven and toppings galore at his fingertips, D’Allesandro says his favorite pie is actually pretty simple. “Cheese pizza. I really like cheese. It’s easy. I’ve been making a lot of vegan ones too, it’s just a lot of cheese every day. If I’m trying to make it healthier, I just take the cheese off. One thing I’ve realized is how much cheese and crap I eat throughout the day, so one thing I try to do is keep my pizzas light and healthy.” Yes, D’Allesandro says that you should consider pies part of a nutritional diet. “Pizza can be healthy for you. People assume pizza is unhealthy for you, but if you eat good pizza and choose the right toppings [then] it’s not bad for you.”

With 265 days to go, D’Allesandro is just under one third of the way through his challenge, but is already looking ahead to see what’s next. “I had one friend saying that he’s going to challenge me after this year to not eat pizza for an entire year. I think it might be kind of easy after forcing myself to eat it every day.” Pausing, D’Allesandro looks at the slice in his hand. “But nah, I don’t think I could go an entire year.”

Follow D’Allesandro’s year of pizza on Instagram at @pizza.watts, where he posts photos of his daily pizzas.