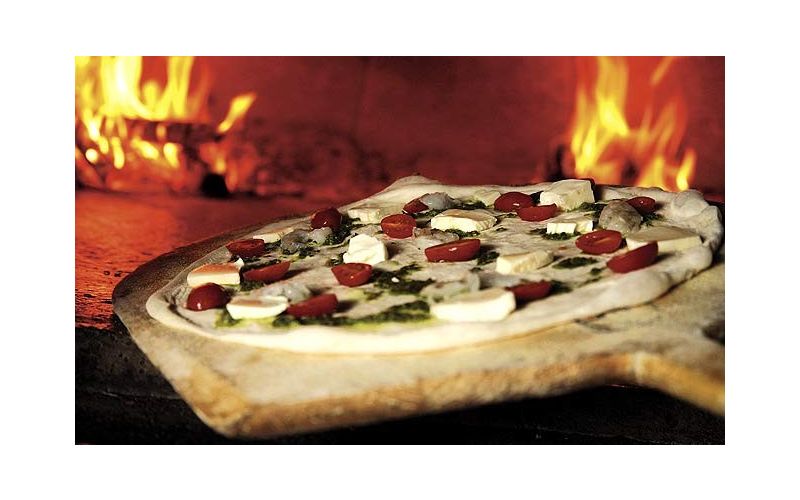 If you read food articles from around the country, you undoubtedly noticed a spate of pizza-related prose over the summer months. Frank Bruni in the New York Times perceived the pizza art in NYC as "definitely having a moment," and GQ put together a controversial list of America’s best pizza places. The pizza craze, which one could argue has been steadily gaining steam for, oh, about a hundred years, has reached new heights.

Charleston may have missed out on the glossy pages of Gentleman’s Quarterly, and we certainly can’t compete with the Italian American influences of the Northeastern corridor. We don’t even have the cosmopolitan clientele of Chicago or the West Coast, but we do have soul and a surprisingly hot trend in adventurous eating, which means we’re seeing our own fair share of fancy pizza pie.

This hasn’t erupted in so much of an explosion as it has a steady stream of innovative purveyors whose efforts have accrued over the years and given the art of the pizza stone a genuine "scene" about town.

Whereas the choice between pizza joints used to oscillate between eating industrial dough in little red-roofed huts or getting a slab of cardboard-flavored pie shuttled half-cold to your door, Charlestonians can now find a diverse selection of pies, from traditional to inventive, globally inspired or topped with local produce. We have accumulated so many stellar pie joints, it’s actually hard to choose — and debates among friends over where to score tonight’s pepperoni get heated.

If you had to pick a place that started it all, Andolini’s [Mt. Pleasant. 414 West Coleman Blvd. (843) 849-7437; Downtown. 82 Wentworth St. (843) 722-7437; West Ashley. 1117 Savannah Hwy. (843) 225-4743; North Charleston. 6610 Rivers Ave. (843) 266-7437; James Island. 967 Folly Road. (843) 576-7437] would be a leading contender. Sure, there have always been college beer stops that slung pie along the entire length of Upper King Street, the kind that practically anchored the old KGB area before gentrification drove such efforts north, but Andolini’s was different somehow, fresher, more tuned for quality. Perhaps it was the yeasty scent of fresh dough rising in all corners of the original Wentworth house, the almost artisanal quality of the charred crust, or just the simple realization that the New York pies that they sent out by the dozen were so vastly superior to everything that came before — that one would have to book a flight to the Big Apple to taste anything remotely close in style. Outside of a few more locations around town, not much has changed. CofC students still pack the original shack every night; the cold beer still flows across the worn wooden counters, and hot pies and calzones, dripping from that signature thin crust dough satisfy a hundred bellies, whole or by the slice. We usually get the plain pepperoni at Andolini’s, not because we don’t enjoy a Jeremy’s Special or an Edie’s Favorite from time to time, but because the best way to enjoy the fresh dough, and the tradition that really defines pizza in Charleston, is to keep things as simple as possible.

Of course, simple doesn’t have to mean following the traditional line and tossing out über-authentic NYC-style pies. We have some about town who may not follow the rules but make some fine dough nonetheless.

Matt McIntosh has always been up to his elbows in flour, usually in the stone-ground organic kind. We knew him way back when he worked at Normandy Farm Artisan Bakery, when it was on Society Street and he lived a couple doors down in a decrepit old hole. It was clear then that the idea of quitting work to push a crazy wood-fired pizza oven around town, tossing out deliciously charred dough with seasonal toppings sourced from local farms, was far from a stretch. You can still see the old cart at a local event every now and then, but EVO [North Charleston. 1075 E. Montague Ave. (843) 225-1796] settled in a suitable home in the ever-emerging Park Circle area of North Charleston and never looked back.

Ordering is easy, unless you’re a vegetarian, since seasonal salads brimming with the freshest local ingredients and stellar margarita pies will be quickly marginalized by the Pork Trifecta, the only pizza we know of with its own bumper sticker. It’s a smoky mass of house-made sausage, pepperoni, and bacon that no pizza-loving carnivore could ever resist. It makes a solid case that local interpretations of the pizza art might easily rival rip-offs coming in from out of town.

If you want to eat your pizza in high style, surrounded by wannabe fashionistas and the best looking waitresses in the biz, then you’ll have to fight for a parking space near the decidedly crowded Marion Square area. Here you’ll find Monza [Downtown. 451 King St. (843) 720-8787], which proved that local pizza could be as racy as a vintage Ferrari. All sleek and stylish, this Upper King Street stalwart attracts a similarly attuned crowd with a variety of traditional pies. The super-hot oven finishes a pizza in seconds, rather than minutes, and the fast pace of production within belies a care that produces crusts of exceptionally thin dough, shatteringly crisp, often with locally sourced ingredients topping the round.

Even if the scene evokes the chic style of Northern Italy, the pie is decidedly Neapolitan, with all the usual suspects appearing as they would in any fine Italian pizzeria. We most often go for the Volpini, a voluptuous stack of serrano ham, arugula, and pecorino cheese. Of course, you can still get a local egg plopped down in the middle of your pie and baked until it’s just bubbly, and that’s about as Italian as it gets.

To prove that you’re in the know, take your date to the small but savvy Mia Pomodori [Downtown. 212 Rutledge Ave. (843) 724-3560]. Stuffed into a tiny space, they serve really good NYC-style pie and the best Sicilian variety in town. The Southern Italian style is thick and doughy, with the sauce placed on top of the cheese, a lead belly weight that’s so good you’ll eat until you groan. They have a nice craft beer selection, and it’s a family-run joint, which ups the consistency and the care with which they make each delicious slice.

Down the street you’ll find the place to have pizza with your beer — the classic, the bold contender, the one and only, D’Allesandro’s [Downtown. 229 St. Philip St. (843) 853-6337]. This is the original "pie in the ‘hood," a throwback if there ever was one. This trailblazer, proffering chicken wings, dough, and cold beer, will deliver it to you if you can’t find your way to the corner of Bogard and St. Philip. This just may be the best cardboard-boxed pizza in town. It’s thin, it’s real, and it’s thoroughly New York in style and presentation. No pretense, no promises, just cheese hot enough to burn three layers of skin from the roof of your mouth, and flavorful dough that you’ll need to fold in half to pick up with your hands.

But sometimes you just want something different, more creative, and then you go to the Mellow Mushroom [Downtown. 309 King St.(843) 723-7374. Mt. Pleasant. 3110 Hwy. 17 N. (843) 822-4528]. She’s the queen of King Street, a marketing scheme crossed with dough and cheese, always on the prowl for a funky new angle. But they serve good pie, creative pie, sometimes pies that other local chefs think up. They have a beer club, where you get recognition for drinking some insane number of brews over time, and a new patio that they fought hard to let you sit on and dine al fresco in the evening dusk. Fans of Mellow Mushroom abound, and they are loyal, scarfing down novel pies like the Philosopher’s and the Kosmic Karma, a swirly, psychedelic creation of sun-dried tomatoes, feta cheese, and pesto. They pack the place, upstairs and down, families, coeds, and foodies scarfing down huge slices, sandwiches, and salads. They call themselves "an amusement park of pizza," and they live up to the billing.

Romantic pizza can be found just west of the Ashley. The wood-fired oven at Al di La [West Ashley. 25 Magnolia Road. (843) 571-2321] glows into the Avondale night, and there may be no finer place to sit and drink a glass of wine with a fresh pie than the little patio out front. Al di La installed an oven before wood-fired ovens were cool. The tiny little rounds — call them pizzettes — come with creative Italian themes: portabellas and goat cheese or a pesto flatbread in the spring. Sometimes they’ll make them up on the fly with whatever needs to be used up — and that’s the spirit of pizza itself: a round of flatbread, a smattering of odds and ends, and a quick turn in the hot oven. That’s getting to the authentic source of the Italian ethic, and no place does that better than Al di La.

Drive up to Summerville and you’ll find the surprisingly delicious Famulari’s [Summerville. 1704 Old Trolley Road. (843) 832-2222], stuck in an older strip mall on Trolley Road. It’s a simple recipe for success: two brothers and a friend transplanted themselves from Wisconsin. They came for the weather and the beach and decided to make a go at running their own pizzeria. Here you’ll find the best Chicago-style pie around: thick, rich, brimming with steaming whole roma tomatoes and a quarter inch of gooey cheese, imported, of course, directly from America’s dairy land. Just pulling a single slice from the 14-inch round releases a river of grease and mozzarella. It soaks the to-go box, and if you don’t have a towel, it’s hard to get it home without ruining the backseat of your car — which is a good thing, unless you have heart problems. Luckily, they also deliver to the local area and serve fresh salads for the health-conscious dork in the crowd.

For every neighborhood, there is a pizza place. Did we neglect to name your favorite slice? Who do you think has a good pie and why?