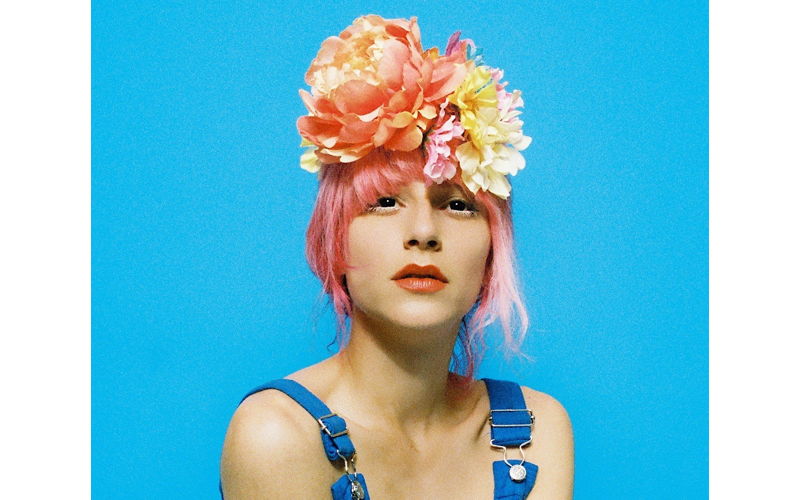 If it’s true that good albums create worlds of their own for the listener to dive into, then Love Legends, Pt. 1, the new EP by Atlanta singer-songwriter Pip the Pansy, certainly qualifies as a good album.

By itself, the music is completely immersive, bathing the listener in wave after wave of lush electronic pop. All five of the songs on the EP are multileveled gems that mix programmed beats, icy synths, and dizzying vocals, with Pip using overdubs to create a kaleidoscopic chorus of voices that open up her beguiling melodies.

But it’s not just the music; lyrically, Pip wanted to weave a concept throughout Love Legends, Pt. 1, specifically a mythological one. The EP is loosely based around legends and myths that she utilized while writing the album. There are direct references to mythical figures in lyrics like, “Aphrodite fantasy/Baby, does she look like me/When you dream in color,” from “Indigo Fantasy.” But, in general, her lyrical approach is impressionistic, touching on all sorts of archetypes and fantastical ideals.

Pip has released a series of EPs and singles in the electronic pop mold before, but this is the first time she’s thematically linked her material with an overarching concept.

“I think that these songs belonged together,” Pip says. “I’m really into this subject of Greek mythology, and I’ve studied it for a long time, and read stories, and watched Discovery Channel documentaries, and all this kind of stuff. I spent a lot of time digesting information for this project. Before this, it was more about, ‘Oh, I’m feeling this today,’ but this was, ‘I’m going to write all of my songs within the realm of Greek mythology or ancient stories.’ I think having it based around this one idea definitely informs how you’re going to move forward with recording.”

In fact, if she hadn’t been feeling a little pressure to get new material out (the EP was her first album since 2017), Love Legends, Pt. 1 would probably have been a full LP.

“I named it ‘part one’ intentionally,” she says. “I’ve actually started working on part two, because I was so interested in what I was learning. But it was time to get new music out. The boring business side of things was, ‘I need to put something out there,’ but I still needed more time to focus on this. So calling it ‘part one’ allows me to continue that concept in a way.”

Even if Pip largely has the concept for Love Legends mapped out, she admits that she doesn’t quite have the touring part down. Her typical live setup is solo, which is somewhat problematic because the material is so lush and layered.

“I’m still figuring out what I want my live show to look like,” she says. “For convenience, it’s easier to travel alone. And when I travel alone, the show is very track-heavy. But I actually prefer these songs with a band. For my release show, I think I had four guitar players playing on one song, and that’s fun and exciting to me. That feels better than just putting the track on. So performing these songs live is still kind of an experiment; I’ve tried a couple different ways, and I’m still trying to figure out a way that’s satisfying to me as an artist but still gives the fans what they want to hear.”

There has been at least one situation where Pip has been able to accurately recreate a moment from the EP, and that’s with the song “Indigo Fantasy.” She collaborated with the Charleston alt-hip-hop act Little Stranger on the song, and the second half of the track features a tongue-twisting double-time rap from the duo’s emcee, Kevin Shields. Pip recently played a few shows with Little Stranger and was able to bring Shields out for the song.

“I wrote ‘Indigo Fantasy’ first out of all of the songs,” she says, “and it was a really crappy demo. I texted Kevin and said, ‘I have this idea, and I’m going to send it to you, and I’d love for you to put a verse on it.’ And in the demo, I only had one verse, and then I let the track play out for a really long time. So I think Kevin thought I wanted him to fill that whole thing. So it actually ended up being this really long rap. And it was so good I didn’t want to cut any of it. So the song really became half what I wrote and half what Kevin wrote.”

In a way, that collaboration is an extension of the new musical energy that Pip has been experiencing recently; pushing her creative boundaries has been the name of the game.

“Sometimes I had trouble having fun with my music because the writing process was so serious to me,” she says, “and working with Kevin was kind of this way to break out of that box I get stuck in sometimes. I just had a song that was fun and cheeky. And that kind of stuff can still be profound, it just has a different personality than I usually explore in my music.”