The Tide Is High 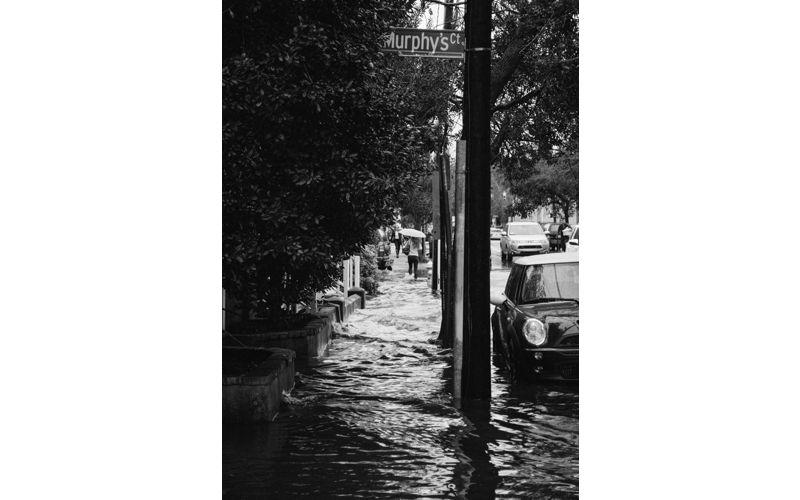 Enough Pie, a nonprofit devoted to using creativity to connect and empower Charleston’s Upper Peninsula, has presented four annual art exhibits collectively titled, Awakening. The Awakening project, which was created to shine a light on resources, places, people, and issues that deeply affect the UP, has incorporated sculpture, large-scale outdoor installations, storytelling, dance, and more. But the fifth edition, which starts this Saturday, is perhaps the most important one Enough Pie has yet done. The theme is King Tide, and it concerns the rising tide levels and how they are affecting the city.

Experts estimate that by the year 2045, Charleston will experience some level of flooding for 180 days out of the year. In order to bring attention to this increasingly serious environmental issue, Enough Pie has gathered a team of artists, scientists, and organizations to shine a light on rising waters through public art, parades, lectures, and events.

One of the most striking projects under this year’s Awakening banner is a series of photographs by Jared Bramblett called Variable Boundaries. The photos, which are both in color and black and white, are of various streets, walkways, underpasses, and paths throughout Charleston that are partially or entirely covered in standing water. The photos, particularly the black and white ones, are stark, startling, and ominous, implying a world of damage and wear and tear underneath the water.

For Bramblett, the photos are a combination of his artistic passion and his occupation: In addition to taking pictures, he’s a civil engineer with a local firm called Davis & Floyd, and he’s currently working on improving storm drainage and irrigation improvement. “The photos weren’t taken as part of my work, but the idea from the project stems from what I do,” Bramblett says.

Using his professional training and his eye for capturing a striking image, Bramblett takes these photos both to raise awareness of the rising tides and simply to create beautiful pictures. “A lot of my photos are looking at things that not everybody notices or sees,” he says. “The fact that I’m an engineer and the flooding is a project I’m working on gave me a different perspective. It’s kind of eye-opening when you’re standing on a street and the drainage system isn’t working and it starts overtopping while you’re standing there. At the same time, I want to make it so that people would be proud to hang the prints.”

After working extensively on drainage and irrigation issues at his day job, Bramblett began instinctively grabbing his camera and hitting the road anytime the weather started getting gloomy. “I knew when it was raining, it was high tide and it was going to be flooding,” he says. “So I went out there and took photos. And that’s a really good way to raise awareness of how these issues seem to affect people with different incomes and different socio-economic levels differently.”

As if his profession didn’t give him enough of an inside track on his photography, Bramblett also spent time working with Charleston Waterkeeper, an organization whose mission is to protect, promote, and restore the quality of Charleston’s waterways, while ensuring the public’s right to swimmable, drinkable, and fishable water.

“Through that work, I became aware of all of the old creeks that used to exist that were filled in as the land was developed, which would be illegal now,” he says. “And if you start looking at those creeks it’s the same footprint of the areas that usually flood when the tide starts coming in. Even with the rice planters and slaves back in the 1700s, they would manipulate the land to flood the fields. In the early teens in the last century, when they built the Low Battery seawall, they filled everything in behind it.”

Bramblett sees this series of attempts to change the configuration of coastal Charleston’s land as a larger example of the mistakes that the country in general has made throughout the centuries. “I think you could apply that across a lot of different areas of what we did in the 1800s and early 1900s, and really before the Clean Water Act was passed in the early 1970s,” he says. “Every coastal city has manipulated the landscape in a way that’s made us more vulnerable now that the seas are getting higher.”