Phish jammed on a family affair 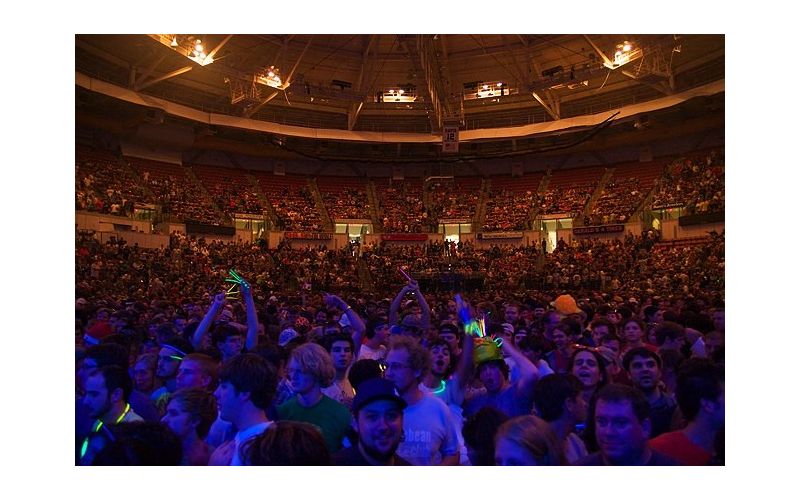 A review and images from the Phish show

Jack McConnell must be proud. If musicians play their best when their parents are watching, Phish pianist Page McConnell stayed true to form at the Coliseum, most notably during a mammoth key-pounding session during a late second set “Suzy Greenberg.”

McConnell’s dad, Jack, was in the audience, and it was evident from early on that Phish had a special show in mind; after a quick “Punch You in the Eye”/“Possum” opener, they followed “Bathtub Gin” by inviting the elder McConnell onto stage to tap dance and sing “Won’t You Come Home, Bill Bailey.”

Stevie Wonder’s dance party highlight “Boogie on Reggae Woman,” came next, before the classic “Destiny Unbound” and the elegantly aging young’un, “Backwards Down the Number Line.”

The excitement for “Bouncing Around the Room” indicated one of two things — either this was a lot of the 12,000 fans’ first show in 14 years, and they loved that tune in 1996, or folks have figured out that it’s not a bad song at all, and is a hell of a lot better than some of Phish’s recent ballad crap. Fortunately, they steered away from those, mixing up the old-school with more upbeat new tunes. “Stash” got dirty for a moment, and “Dog Faced Boy” and the rarity “Buffalo Bill” were a nice respite before the first set highlight “Run Like an Antelope.”

The second set was a stream of songs. “Down with Disease” traveled way into space-funk territory, while “Prince Caspian” received the same unpretentious appreciation as “Bouncing.” From there, “Roses Are Free,” “Tube,” and “Mike’s Song” all brought it full force, with Trey Anastasio grinning ear to ear, attacking his licks with the relaxed confidence of a man who has enjoyed daily massages. “Silent in the Morning” was a welcome inclusion, but “Weekapaug Groove” shook out any sticky points before the aforementioned “Suzy.”

Closing with “Slave to the Traffic Light” was too perfect. After the big “Character Zero” ending, I heard more folks talking about the great sound quality of the Coliseum than seemed reasonable. Who knew?

Phish played 27 songs on Friday night, but it rarely felt like they were rushing. Instead, it seems their new respect for Dixie bode well for what may be their last appearances in the South for a while.

Anytime a band plays a venue over two consecutive nights, one would hope the second night would be the more explosive. That’s not always the case with Phish, who selectively or providentially bring the heat in the least predictable of cities and sets.

After Friday night’s rock ’n’ roll rager, most two-night attendees were probably hoping for something on par with the night before. It didn’t seem possible to top the 28-song set of night one. But surprise Phish did, If Friday was Page’s night, Saturday was Anastasio’s time to shine. Even signature, obligatory licks took on new lives; the final, rip-roaring riff of “Cavern” was a case in point of pure fingertip fire.

That apparent set closer is a good example of Phish’s attitude in Charleston. After a first set that included all-time great “The Curtain With,” feel gooder “The Mango Song,” sing-along “Sneaking Sally Through the Alley,” and the deep funk of “Sand” (complete with light man Chris Kurado’s mouth-swallowing-the-audience color insanity), “Cavern’s” aforementioned riff ought to have ended the set. But Phish dropped immediately into the opus, “David Bowie,” stretching out an already epic first half.

Set break, and we’d already had a show’s worth of jaw-dropping fun.

Talking Heads’ “Crosseyed and Painless” kicked off a second set that also proved to never let up, including a perfectly executed “Fluffhead,” perhaps the communal crowd vibe moment of the weekend. “Also Sprach Zarathustra” got deep and funky — too bad for Gamecock fans hearing their fight song that the team was busy dropping their load to Kentucky.

When the 2001: A Space Odyssey’s build-up peaked, I wet myself. And unfortunately, I missed the rest of the show. Because urinating in public is an offense that apparently means jail time in North Charleston. In fact, of the 83 arrests over the weekend, at least 20 were for “urinating in public,” according to North Charleston Police Public Information Officer Spencer Pryor. I personally know of a banker and veterinarian with no prior arrests or criminal backgrounds who were shackled, wrists to ankles, and taken to Leeds Avenue, where they weren’t released until morning — 15 traumatizing hours in the clink. Their offense was skipping the 45 minute PortaPotty line in the parking lot and ducking into the woods to relieve themselves. After the show, I made sure to hold it until I got home.

In reality, “2001” was followed by a deeply grooving “Tweezer,” and another opus, “You Enjoy Myself.” Encores “Quinn the Eskimo” and “Tweezer Reprise” left the arena on an energized note.

Phish had fun in Charleston. Saturday included three synchronized dances between Anastasio and Gordon, always a good indication that they’re enjoying themselves (not to mention Trey’s two night perma-grin). The sound quality was superb both nights, and Phish seemed to attack the room with the same energy they grant the Hampton Coliseum. Maybe they’ve found themselves a new spaceship.
Come back, and we’ll be there, ready for lift off. But we might just skip the parking lot before the show.