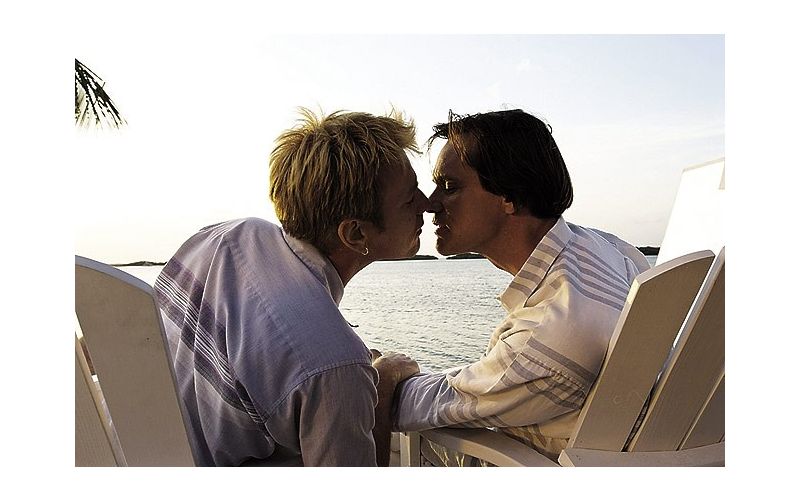 With I Love You Phillip Morris, Ace Ventura and young Obi-Wan are in love for reals. In an introduction echoing Sunset Boulevard, Steven Jay Russell (Jim Carrey) calmly states from a hospital bed, “Love is the reason I’m laying here dying.” From there, we retrace Russell’s life, from his childhood as an adopted kid looking at cloud-shaped penises to his days as a policeman, with a lightning quickness that sweeps the viewer into the film’s narrative. The hyper-speed montage screeches to a halt at two points: When he finds and is dismissed by his birth mom and when Russell is in the middle of an extramarital booty-bumping interlude. Your eyebrows can’t help but raise when his partner lifts his head into the frame and tells Russell to unload in his rectum. All this while Russell waves his arms around like a cowboy.

Next, we get a taste of the double life that Russell is starting to lead. We breeze through another narrative until Russell gets in a car wreck, which leaves him declaring his sexuality to cops, ambulance drivers, and, most notably, his wife (Leslie Mann). Following that epiphany, we’re treated to another narrative mosaic of Russell’s new lifestyle with his hot boy-toy and his increasingly criminal instincts. Dabbling in all kinds of fraud, Russell puts himself in the direct target of the local feds. Naturally, it’s only a matter of time before he’s caught, cuffed, and tossed in jail. And so ends the rapid Goodfellas-esque montage.

At this point, Russell, now a seasoned jailbird, gives a newbie a tour, even supplying him with a tip on what money and a hummer will buy you. Meanwhile, Phillip Morris (Ewan McGregor) comes to the prison. Morris and Russell strike up a friendship, one that naturally turns into a relationship. Like most romantic comedies, the couple’s scenes are quirkier and cuter than Meg Ryan’s original unduck-lipped smile. Before too long, the star-crossed lovers leave the confines of prison life thanks to Russell’s deft law-bending. That same talent lands him back in jail and gets him out again as well. The merry mix-ups that occur for the rest of the film are balanced by Russell’s undying love for Morris.

With that in mind, one might try to guess how the rest of the film will play out until you realize this is a movie about a con artist. With much of its bouncy narrative harkening films like Catch Me If You Can, the movie is basically a likable piece of fluff with a little gayness thrown into the mix.

Writer/directors Glenn Ficarra and John Requa — the guys behind the script for Bad Santa — are revisiting familiar territory with I Love You Phillip Morris. Though the palette’s a little sunnier, thanks to cinematographer Xavier Pérez Grobe’s use of vivid colors, there is still a dark cloud hovering in the distance to remind viewers of the film’s precarious subject matter. Carrey’s trademark manic humor makes random appearances throughout the movie, but his performance lies somewhere between Eternal Sunshine of the Spotless Mind and Ace Ventura‘s calmer moments. McGregor continues to add to his resumé, giving the film’s most impressive performance. While Phillip Morris may be an effeminate Southern fella with a sensitive disposition, McGregor never resorts to the mindless stereotype of a dandified Southern gay male. That’s a nice change of pace.

It shouldn’t be necessary to mention the movie’s gay theme, but until things like Prop 8 are inconsequential relics of a bygone era, I Love You Phillip Morris will always be tagged as the gay Catch Me If You Can. This is part of the reason the movie has languished in distribution hell; it definitely has nothing to do with its quality. Whether or not its main characters’ sexuality is played up so frankly, considering the film’s quick pacing, likable characters, vibrant colorful photography, and scant 98 minute running time, the sexuality seemed like an afterthought to this true story. I had a gay old time with Phillip Morris.