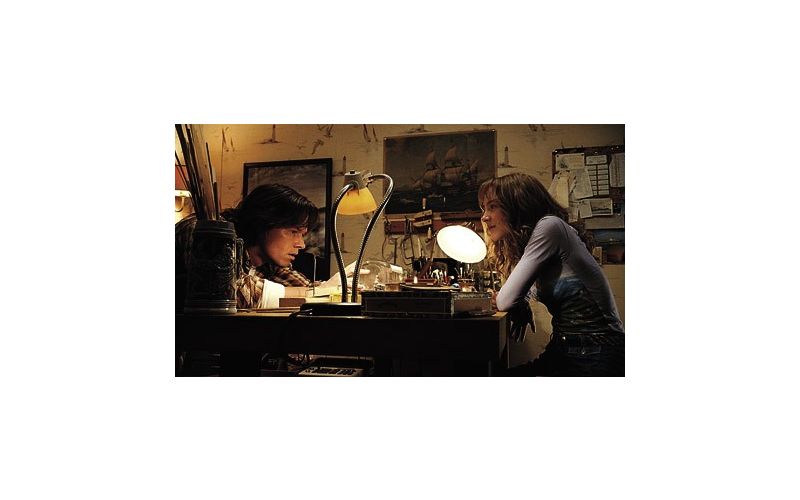 This review of the highly anticipated Peter Jackson film adaptation of The Lovely Bones should come with a small caveat. I was not a fan of the 2002 bestselling book by Alice Sebold, and therefore not among those delighted to see that literary sensation translated to the big screen. For me, there was something cloying, maudlin, and self-consciously, fussily poetic about Sebold’s new-agey novel about a 14-year-old girl Susie Salmon (Saoirse Ronan) who in 1973 is raped, killed, and dismembered by the neighborhood serial killer and then looks down on the family she has left behind from her heavenly perch.

Jackson’s film version takes a book that might seem impossible to adapt and marries it to his demonstrated taste for the fantastic. Where some directors might be intimidated by representing Susie’s celestial afterlife, Jackson is off the leash, dreaming up crazed phantasmagorias: life-size sailing ships encased in glass bottles crashing on the shore of a dire, dark beachhead, Susie sailing through a cartoonish wintry landscape on a sleigh pulled by a tiny black pug. It’s trippy, surreal, a mix of a ’70s-era Seventeen magazine and a Pink Floyd album cover.

Fantasy has clearly become what Jackson is now known for, but the realistic sequences of The Lovely Bones are more emotionally enthralling, especially the cramped, chaotic but cozy familial home front. Jackson’s portrait of the intimate neighborhood of split levels, child-filled sidewalks, and a bustling shopping mall (look for a cameo by Jackson) recalls the similarly compelling snow globe picture of the past in Sofia Coppola’s The Virgin Suicides. Despite the wondrous beauty of Susie’s afterlife, we feel her pain at being trapped outside of that warm, vibrant reality. Also notable is the horrifying realism of the scene where Susie is lured into the secret lair built by her murderous neighbor George Harvey (an impressively icky Stanley Tucci). It’s a dank underground cave decorated with junky tchotchkes and childish touches meant to brighten the homemade hell where Susie meets her end. In a demonstration of admirable restraint, Jackson does not picture the details of Susie’s death the way another more sensation-minded filmmaker might have.

While Susie wanders through her Own Private Afterlife, her distraught parents contend with their loss. Dad Jack (Mark Wahlberg) never gives up hope and presses the local cops to keep looking for her kidnapper. Susie’s weirdly impassive mom Abigail (Rachel Weisz) wants to move on and bury the past.

There is much to recommend in Jackson’s The Lovely Bones, beyond its flair for the time period, in its unconventionally lovely and arresting lead Saoirse Ronan (who made such an impression in Atonement) who carries the film on her back.

But the film’s inescapable flaw is, ironically, Jackson’s special effects artistry. At their best, the sequences are astounding, dramatic visualizations of the intense feelings of a sensitive teenage girl. At their worst, all of that CGI technology is akin to a birthday boy being told he can eat his entire birthday cake. One slice is good, but the whole cake can induce a stomach ache.

Though one of Jackson’s best films is his emotionally intense 1994 film Heavenly Creatures, about the scary, ultimately murderous bond between two young girls, Jackson has since become most identified with the astounding visual universe and cinematic magic of J.R.R. Tolkien’s Lord of the Rings trilogy. The emotional core of The Lovely Bones should be closer to Heavenly Creatures, but Jackson has sacrificed feeling for effect. Adrift in her magical, ever-changing heaven, Susie seems less and less like a girl and more like a character in a video game.

To its partial credit, Jackson’s film is not untrue to the tone of Sebold’s novel, which has its cloying and excessive elements as well. Perhaps fans of the novel will respond to the shared tone of book and film. For others, the film may feel like a disappointment, especially because Jackson is most certainly not one of those effects-centric blockbuster franchise kings lacking evidence of a soul. Jackson is an interesting talent, steeped in the counterculture (what other director would choose the Cocteau Twins for his soundtrack?) and has a sensitivity in representing outsider points of view evident in the way he made even the love affair between an ape and a blonde heart-wrenching in King Kong. But in reaching for the soulfulness in this young girl’s plight, Jackson seems to have lost his at the temple of CGI.