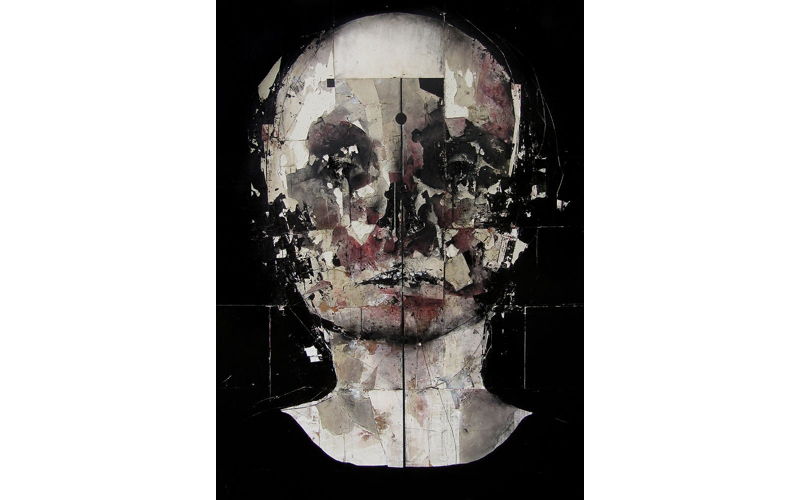 The Beautiful and the Damned

Paul Cristina and I are sitting in his studio, listening to a compilation of jazz songs from David Lynch movies. We agree that the setting — a raised platform in a drafty studio, two lumpy pink chairs, a lone coffee lid on the floor by our feet — feels a bit Twin Peaks-y. Later, listening to my transcription of the interview, which clocked in just shy of two hours and 15 minutes, I feel transported. It might be the music — a soundtrack to one afternoon of my life — or it could be what Cristina’s talking about. And what is that, exactly?

“I get really enthusiastic talking about art. I have a lot of shit to talk about,” Cristina says, settling into his pink chair. He pulls out several pieces of lined notebook paper, full from top to bottom with notes he’s written himself. He doesn’t want to miss anything.

Cristina is a local artist for certain. The type of artist he is, though, can’t be defined in one term, one medium. He’s been drawing since he was a kid and in the past couple of years he’s taken up charcoal-on-paper realism, acrylic painting, mixed media collage, and, in the past month alone, he’s started working with oil on canvas. So many mediums, but really, just one message. As Cristina says, “Where the need to make art comes from — that’s what I’m interested in.”

Cristina grew up around Cleveland, Ohio, one of three boys in an Italian Catholic household. “I didn’t have anyone in my family I could relate to. I always felt I was an isolated person in this circle of people,” he says. So, he quietly rebelled, asking his parents to put him in public school in seventh grade, when he started to experiment with marijuana and LSD. “LSD was one of those things that just opened you up. It allowed me to get outside of my introverted bubble, expand mentally, be more free,” says Cristina. This expansion fueled his passion for drawing, a hobby he’d dabbled in since he was very young. “I had so much interest in making art, I didn’t know a damn thing about it,” he says. “I just knew I loved to draw.”

In 1998 Cristina’s family relocated to Rock Hill, S.C. for his father’s job. “I was starting high school not knowing a fucking person. I didn’t know anybody. I hated the South, just being a naive kid. Growing up in the north, you grow up … thinking Southerners are a bunch of stupid rednecks.” He talks, passionately, about his distaste for phrases like “yes, ma’am,” and his general teenage resistance to a new life in South Carolina. But things progressed, he made friends, he continued to draw, and eventually, after high school, he and some friends formed a band and moved to Charleston.

“I worked a bunch of odd jobs. I was working at Panera Bread for a couple weeks. That was such a bullshit job. I was being oppressed by these crazy, wacked out people.” Cristina goes off like this, in tangents that relate to the timeline of his life, but also to his deep-seated belief system, which I think could fairly be summed up as, “No bullshit.”

“A lot of us want to pretend everything is going great. Everyone wants a Facebook profile version of what life is like. You see these bullshit pictures of families in white T-shirts and jeans — that’s not real life. There’s your Bob Ross way of thinking life is. Guess what? That’s not reality,” says Cristina.

Bob Ross, best known for his PBS show The Joy of Painting, is everything Cristina does not want to be. Ross, with his permed afro and, well, PBS show, is almost a laughable example — who would take that guy seriously? But he serves as an important litmus test for Cristina: Anything that looks or feels insincere is a far cry from who Cristina is and what he hopes to accomplish with his art.

“Why are we compelled to portray such an exaggerated, beautiful version of ourselves? Dealing with it on a day-to-day basis, every day you’re experiencing the whole scope of life,” says Cristina. He speaks from experience; in 2010, after several years devoted to his music and various odd jobs, Cristina decided to become an EMT.

“I got fascinated by the world of ambulances. I thought, ‘They probably see a bunch of fucked up shit.’ It was just my morbid curiousity coming out,” he says. So he pursued his curiousity and became a certified EMT, working for two years with a private company, and then four years with Charleston County EMS.

During this period, Cristina’s interest in art reached a new level: For the first time he saw the work of Francis Bacon, a 20th century figurative painter known for his grotesque, raw imagery. “Francis Bacon punched me in the gut like no one had ever done. He gave me something to look at that I had never seen before. That motivated me more to paint. It’s inspiring to say the least,” says Cristina.

It’s easy to see Bacon’s influence in Cristina’s most recent works, oil on canvas pieces that depict fleshy suggestions of human heads. We stand in front of three canvases, each depicting some kind of human figure. “I like challenging myself,” says Cristina. “I already know I can perfectly draw a face. But can you fucking abstract the face? How can you make a face without actually drawing the face?” And he’s done just that — suggest a face without telling us that we are seeing a face. “I want to create art that creates a high enough level of inquiry or intrigue that leads to us having a conversation,” he says.

Pieces like “Preservation of Sin (Commitments to the Ritual Head)” are traveling to New York in February for a two person show at NYC’s Last Rites Gallery. Cristina will show his works alongside French painter Eric Lacombe, who has an international following. Needless to say, this opportunity could be big for Cristina, a guy who’s only been creating art full time since September, when he was fired from his EMT job.

“I’d been wanting to quit but someone came in and pulled the trigger for me and cut off my safety net of a steady income,” says Cristina of his firing. “I appreciate it as a natural course. One chapter died and it gave life to a whole new chapter.”

“I take it very seriously,” says Cristina of his flourishing art career. “Without taking yourself too seriously as an artist. This is your one opportunity to do whatever the fuck you want. I refuse to settle for mediocrity.”

He leads me to the back of the studio where two large canvases feature charcoal drawings of heads. Side by side they form a diptych, historically two hinged wooden panels of art that work in conjunction with one another. The images started out as fully formed figures before Cristina started stripping away the surface and collaging pieces of paper on top of one another. “I was exploring the aesthetic of stripping away as much as I could from the face — combining beauty and mortality and darkness,” he says. “I like challenging people with that: Can you find beauty in something that’s deteriorating?”