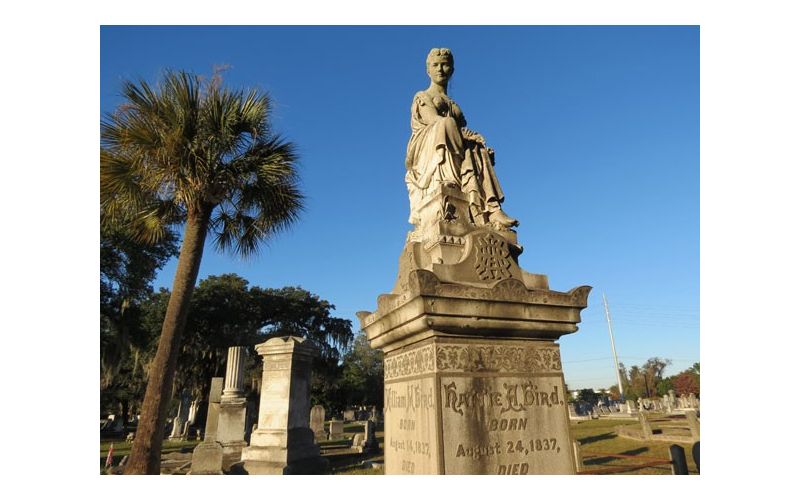 Many a Civil War buff, ghost chaser, and bird watcher have fallen under the spell of Magnolia Cemetery. But for Patrick Harwood, a College of Charleston communication professor who just published his second book on the graveyard, his six-year obsession with Magnolia all started with one photo.

It was a cold March afternoon in 2008. While there, Harwood happened to take a picture of two birds perched upon an old oak branch. He admits that he didn’t even know what type of birds they were, he just found the image compelling. But over the course of three years his avian interest grew and he continued to return to the cemetery shooting more than 40 different species which he compiled into a book, Birds of Magnolia Cemetery: Charleston’s Secret Bird Sanctuary published in 2011.

For his second release, In the Arms of Angels: Magnolia Cemetery, Charleston’s Treasure of History, Mystery, and Artistry, Harwood digs deeper. The self-published and self-compiled tome features, once again, his own photos and information not only on the cemetery itself, but many of the persons buried beneath the soil. “I present in the form of this book a treasure map for discovering a place often called a hidden treasure. Discover Charleston’s Magnolia Cemetery. It abounds with riches,” he states in the introduction.

The book includes an entire chapter on the children buried at Magnolia — offering a chilling and fascinating look at childhood death in the Victorian era. For example, there’s a section about a particularly detailed monument for a dead infant named Rosalie that is shaped like a stroller that stands — to this day — as a twisted flowerpot.

When asked about any juicy or outstanding information he found during his process, he replied, “It’s full of surprises. As many times as I’ve been there, I can go every time and see something I never noticed before.” Each visit uncovers a new marking on a gravestone or a new perspective of the beauty of the place. He says that everything, even the birds and headstones themselves tell a story of what Charleston was and continues to be. For instance, the epitaph chosen on a headstone can reveal an abundant amount of information on a particular person and their place in history. As is the case of a monument that stands for Langdon Cheves, born 1810 and died 1850. The epitaph reads “Indulgent Master.”

The stories about prominent Charleston families such as the Gibbes and the Vanderhorsts give Charlstonians the opportunity to get familiar with the names we encounter or drive by every day. In the case of the Gibbes, the family mausoleum still stands today. Harwood’s pictures of the arched tomb and fine imported statues, clearly depict the family’s desire to express their status and wealth in death as in life.

“The book is in a way a history of Charleston, warts and all,” explains Harwood. The warts, of course, are the artifacts of the institutionalized racism of the antebellum South like the “indulgent master” epitaph or the Dixie flags posted on tombstones. In the Arms of Angels offers an entire chapter on Confederate soldiers buried there, tracing individual Charleston families back to the battleground. However, even the warts are presented in a compelling and beautiful way.

Despite all of his research and expansive knowledge of cemetery, Harwood claims he will always return to Magnolia for the peace and quiet it provides. Perhaps it’s the way the sun shines through the Spanish moss at first light in the morning, illuminating the fog around the headstones. Or how history is made physical on the site — a sleeping portrait of who we were and have grown to be as a city. Whatever the case he says, “They just don’t make cemeteries like these anymore.” Indeed this is true, and it becomes the truth the deeper you get into In the Arms of Angels. The book reveals the rich and sometimes scandalous stories of those buried. That’s the thing about the dead, they remain still as we grow and change, their stories waiting to be heard until people like Harwood dig them up.