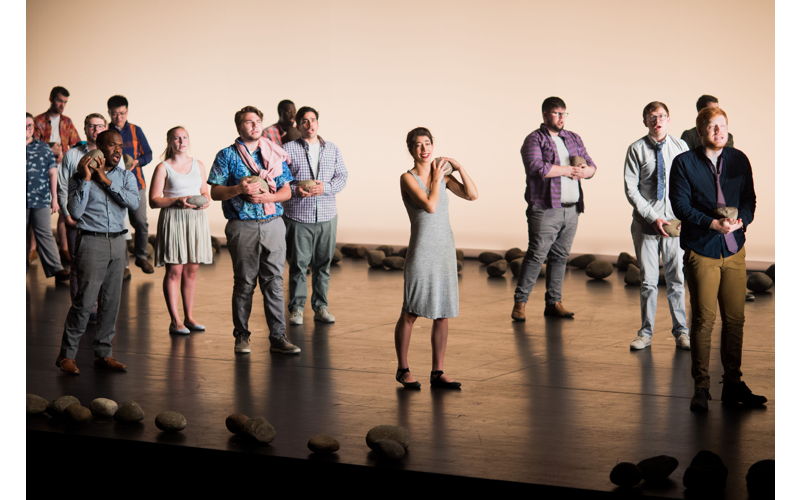 When director John La Bouchardiere saw Path of Miracles for the first time, he had a few questions. “My first experience of it, in glorious medieval basilica outside Paris, was beautifully cathartic and musically satisfying but I didn’t really understand what was going on, even though I had the printed text in front of me,” he recalls.

Path of Miracles isn’t necessarily obtuse, but inundated with symbolism and possible interpretations. Composer Joby Talbot’s 2005 piece is a vocally demanding and mentally engaging masterwork that will be performed by the Westminster Choir at Spoleto 2019.

Separated into four sections, Path of Miracles depicts the trail through the Camino de Santiago, a series of pilgrim’s paths that connect to the shrine of Saint James the Great. Each of the four compositions that comprise the work are the name of a town or city that is found along the passage, beginning at “Roncesvalles” and ending at “Santiago.”

Just as an actual pilgrimage doesn’t start on a whim, “Roncesvalles” escalates in a glacial manner, presenting the journey that starts the journey. The dynamic intro to the 17 minute vocal performance careens loudly in the soprano range, distant from the low susurrus that greets listeners just minutes prior.

The second song, “Burgos,” demonstrates the omnipresent appeal of the Camino de Santiago by utilizing diverse language, similar to other compositions in Path of Miracles. In a droning and ominous first half, discomfort sets in on the listener: “Innkeepers cheat us/ the English steal/ the Devil waits at the side of the road.”

Low register chanting keeps the rhythm steady with mournful vocals walking over it. Somewhere in the middle of all the worry the pilgrim feels, they are inspired to keep their hope alive. “Saint and virgin heard the prayer/ and turned his wound into a scar/ from mercy they gave the dead man life,” the choir sings.

“Leon” is the first moment that sounds heavenly without an impending concern. The chamber choir’s tone glows golden, trading the mysteriousness of the previous compositions for a peaceful trance. There’s less melodic clashing and optimism on the lips of the singers. The pilgrims have passed the midway point and they begin to see the light at the end of their journey.

The beginning of the end, “Santiago,” kicks off with a description of the hardships faced on the Camino de Santiago. “Northern rains fall on the deepening green of the slopes of the valley/ storms break the summer’s heat/ at Foncebadon a pass can be lost in one night to the snow,” they sing without bitterness.

The thoughtful reflection of the first movement becomes sheer joy and triumph when the pilgrims enter the Shrine of Saint James and show their admiration for the martyr.

The lack of musical accompaniment and moments of silence during Path of Miracles provides an emptiness for which the vocals can dissolve. The seconds of stark quiet call for listeners to reflect on the musical exploration, and possibly their own travels.

A message can be gleaned from many sections of the composition, but Bouchardiere comments that there is no uniform moral to take away. “It is said that pilgrims walk their own Camino. Everyone takes away their own message,” he states.

Although the director has not worked with the Westminster Choir on Path of Miracles before Spoleto 2019, he did direct the singers in El Nino at 2014’s Spoleto. “They’re young, of course, but fine singers, mature beyond their years and deeply passionate about great music,” he says about the experience of working with them in the past. “Performing something so complex as Path of Miracles without a score is a huge challenge, and I am demanding a lot more of them, but I am confident they are up to the task.”

While the odyssey through the Camino de Santiago is religiously motivated for many, Path of Miracles harnesses the universality of personal growth and self-discovery.

“I think the Camino is about making the journey itself and the changes that happen on the way, so I hope we’re representing something of what that path might mean to people,” Bouchardiere observes. “Pilgrimage is a metaphor for the path of life, so it’s about facing personal challenges. Don’t come for the rucksacks.”

The inherent difference that distinguishes Bouchardiere’s rendition of Path of Miracles from past performances is the location.

“PoM [Path of Miracles] is usually presented in churches, where stained glass and stone carvings create a visual context, and sometimes in concert halls where their music and text stand alone,” says Bouchardiere. “So we’re taking a very different approach by putting it in a theater and dramatizing it, in the hope that we can uncover more meanings, give a greater sense of the spiritual and physical journey and bring the audience along with us. We are all pilgrims, after all.”