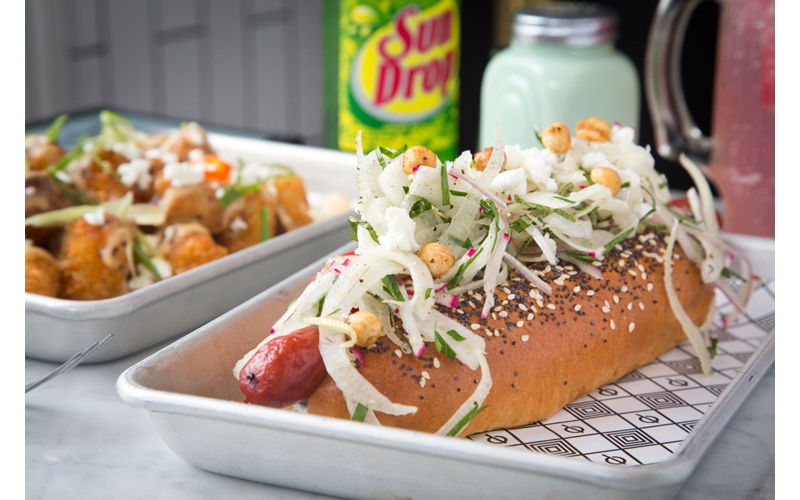 Perhaps we simply didn’t trust it. I was one of those people. I munched on hot dogs a few times per year, dousing them with condiments to disguise the wiener’s questionable contents. With “Don’t Ask, Don’t Tell” as my motto, I chose not to ponder the mystery meats and slew of chemical fillers in my ballpark frank: things like corn syrup, potassium lactate, sodium phosphate, sodium diacetate, sodium erythorbate, maltodextrin, and sodium nitrate (the same preservative found in fertilizers and fireworks).

Yet even the lowly hot dog is worthy of redemption. Catering to growing demand for unprocessed foods and quality ingredients, hot dog giant Oscar Meyer now offers a line of premium beef franks with no artificial preservatives. Taking this culinary makeover one step further, chefs have upped the ante by crafting 100 percent grass-fed beef franks tucked into artisan breads then layered with the textures and flavors of inventive toppings. Now so-called haute dogs are popping up in restaurants, food trucks, and dedicated fancy weeneries across the country. At Japadog in Vancouver, Canada, dogs are piled high with daikon, bonito flakes, miso, even strips of dried seaweed. Dat Dog in New Orleans sells everything from apple smoked sage veggie dogs to alligator sausage dogs topped with crawfish etoufée or wasabi. From Belly Shack in Chicago to I Dream of Weenie in Nashville to DogHaus in L.A. to Bubbledogs in London (truffle mayo dogs served with champagne anyone?), the hot dog has never had it so good.

Now Charleston has its own fancy franks with the newly launched Parlor Deluxe at the corner of Spring and St. Philip. I’ll just put it out there: I love this place. It packs loads of cuteness, nostalgia, clever branding, and forward thinking into a 600-square-foot package.

Ironically, chef Emily Hahn’s initial inspiration took the shape of the anti-hot dog. She initially debuted her “Not-Dog” on the menu at Parlor Deluxe’s sister property the Warehouse just across the street. Meat was substituted for a braised heirloom carrot topped with “chili” made from smoked mushrooms grown by Mepkin Abbey’s monks, enriched with brown ale beer cheese — an instant hit. Owners James Groetzinger and Joey Rinaldi knew they were onto something and had already been thinking along the lines of a creative doggery. (Groetzinger is a fan of Crif Dogs in New York, home to the Spicy Redneck, a bacon-wrapped dog smothered in chili, coleslaw, and jalapeños.) The stars aligned. Sweet Radish Bakeshop vacated the corner shop across the street, allowing Groetzinger and Rinaldi to snatch it up and transform the space into a gourmet hot dog emporium and retro soda shop with tots, waffles, ice cream, and shakes to boot.

A neon mint-green sign glows above shelves lined with vintage seltzer siphons and inspirational cookbooks like Smoke & Pickles, Soda Shop Salvation, and Thoroughly Modern Milkshakes. An ice cream scoop collage flanks the cash register. Customers grab a menu by the door, then stand in a short line contemplating options. Parlor Deluxe boasts at least eight artfully loaded dogs, including the savory Not-Dog. I tried many, shared them with friends, and each of us picked a different favorite.

There’s the Lox’d & Loaded ($10), which begins with Parlor Deluxe’s signature all-natural, gluten-free, grass-fed smoked beef dog with a snappy skin casing, then adds raw salmon, airy light-whipped cream cheese with dill and capers, pickled beets, and a sprinkling of “everything bagel” spice, all nestled in a seeded roll from local Brown’s Court Bakery.

The hot dogs alone made a filling meal, especially when supplemented with a bag of thick, crunchy Zapp’s chips, yet that’s not the whole story. Parlor Deluxe rounds out the offerings with fresh interpretations of other comfort foods too. Crispy tots, golden outside and soft within, come in multiple iterations. I salivated over the poutine ($6), a great twist on the Canadian trifecta of french fries, gravy, and cheese, which substituted tots for fries, local chevre for cheese curds, and smoked ham hock gravy for the thinner, vinegary Quebec version, plus fresh shredded scallions.

Then I went for the waffles. I vow to return to try them all, but the Mi-So Hangry ($8) was a sheer delight. Thin slices of Asian pear lay tousled on spiced whipped cream atop a golden waffle, all drizzled with miso butterscotch and sprinkled with curried pecans. Parlor Deluxe satisfies cravings both sweet and savory. It’s no wonder the college kids pound down the doors routinely just before Parlor Deluxe’s midnight closing, prompting the owners to consider extending their hours a little longer.

Hahn worked with Hilton Head Ice Cream to develop Parlor Deluxe’s exclusive flavors. I loved the PB&J, peach butter pecan, burnt orange caramel, and drunken espresso with its touch of Kahlua. OK, so I loved them all, but the absolute standouts were the honey lemon olive oil (creamy smooth and subtly sweet with flecks of lemon zest), and the horchata, a play on the refreshing Mexican beverage traditionally thickened with rice milk. The horchata was stunning in that it was vegan ice cream, the most delicious oxymoron I’ve ever consumed. It’s made with a coconut milk and flavored with vanilla, cinnamon, and toasted coconut flakes. Smooth and packed with flavor, you’d never guess it was not buttercream based.

I was so satisfied by each visit, I honestly did not have room to try the bevy of fizzy beverages and creamy floats, but it is worth noting that Parlor Deluxe teamed with local Cannonborough Beverage to create signature seasonal sodas, including a sorghum root beer. I did try the fresh squeezed lemonade infused with mint, cilantro, and basil, which was way too sweet for my palate, but excellent when cut with water.

Parlor Deluxe is young but off to a great start. Do yourself a favor and go. Grab a dog, wash it down with a craft or vintage soda (no booze here), and give them your feedback, maybe even a special topping request. Then thank your lucky stars that America’s signature portable meal has been given a new lease on life.