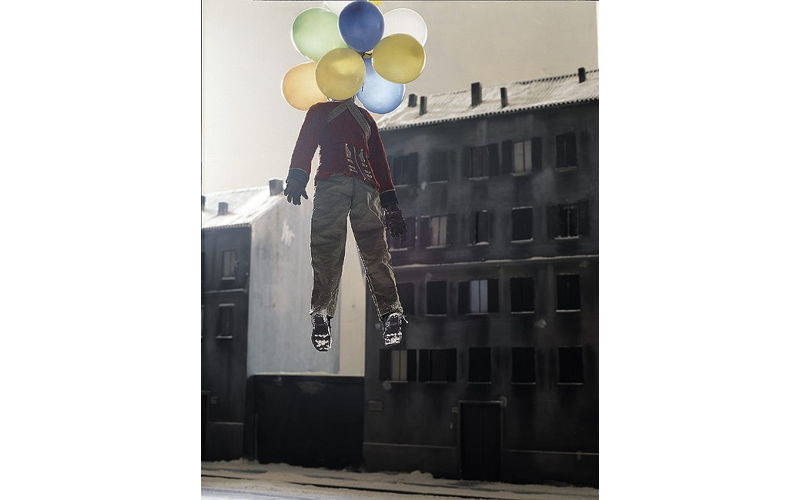 A giant fireball leaps from the mouth of a heavily cloaked firebreather. His back is to the camera. Snow covers the ground. In another image, a man dressed as a clown rests peacefully on his bed in an empty room. The funeral crowd has come and gone.

Neither of these things happened, though — these photographs by Italian photographer Paolo Ventura are actually of sets built in miniature, inspired by the artist’s memories. His creative process takes weeks, and the final photograph isn’t made until the very end.

“It’s funny because it’s a photograph, but it’s not — it’s exactly the opposite. It’s not a picture of something, of something real, what people think a photograph should be. More like a painting, because what a painter does is copy from the real life or invent something,” says Ventura.

Street photographers begin with the world outside and then pick slivers of time, isolating light and emotion. Ventura starts with an empty table.

“I don’t need to go out and make this thing,” he says. “I tried in the beginning. I started to go around because I had this idea in my mind and I was looking out. Then I understood that there’s nothing that I want outside. I decided that I should just do it, what I want.”

Ventura divides the empty space with an initial drawing. When he started out, the drawing was the end product, but he soon realized that he wanted more. He started building small sets of street scenes sparsely populated by a few figures.

It took about a year to refine his miniature construction skills to the point he wanted. He tracked his progress with Polaroids and built albums of different views, angles, and figure positions.

When the set gets closer to the image in his mind, he begins to arrange figures on its streets and takes more pictures. After deciding on a final candidate, he lives with it in his daily life.

“I put the Polaroid in my pocket for a couple of days and constantly look at that,” Ventura says. “When it is good, then I’m sure that it’s the picture.”

After weeks of drawing, construction, and testing, the final image is made in a fraction of a second. The photographer’s goal is not about freezing time, it’s about finalizing a psychological connection. They’re indecisive moments, not the mechanically precise time grabs of documentary photographers.

Ventura draws inspiration from early childhood memories in small Italian towns. They aren’t peak moments or scenes of history. Many of the scenes are after something happens or on the way to somewhere else. Figures walk in anonymity, bodies rest quietly after a funeral, and circus performers stand in snow outside their tents.

Circus performers are a common theme in Winter Stories. They’re usually shown in alleys and behind tents, waiting for their next performance.

As a child, Ventura didn’t really like the circus. Later when he was a teenager, he got a behind-the-scenes glimpse of the performers when one set up camp near his school.

“I was coming back from school, and all the animals were outside in little cages,” he recalls. “All the people going around … these people with strange clothes. It was really fascinating. I never had the curiosity to go inside. To me, the nice [part] was outside, not really the stage where everything was perfect with the lighting and people clapping. That didn’t interest me. I liked the world outside the circus.”

His sets reconstruct the emotional experience of those memories. With soft lighting and a muted color palette, the images conjure up early 20th century neo-classical painters like Antonio Donghi, whom Ventura mentions as an influence. He disavows any direct documentary photography connection, but his final images do have a lyricism akin to Josef Koudelka’s “Gypsy” work. Like Koudelka, his photographs often carry an implied meaning rather than an implicit one.

“People started as real, as a witness, of something out in the world,” he says. “What you see now is more people in our field using photography; they all manipulate. Nothing is real, more or less,” says Ventura. “I use photography like I can use a brush or any other tool. I still use the idea that I was there in the first second, but I wasn’t there.”

Ventura considers the end photo to be the final work, but he has recently included some of the sets in shows for museums. Although initially reluctant, he now acknowledges that it is all part of the same work. Like his own experience of the circus, visitors have enjoyed the behind-the-scenes glimpse of the process.

Since he began the project, Polaroid has gone out of business (he now uses Fuji’s alternative), and digital photography has changed our view of what a “real” photograph is. His nostalgia for old-world Italy doesn’t carry into modern photography. He’s not worried about digital’s final destruction of reality in photography. In fact, he celebrates it.

“In the past 150 years of photography, people have been debating whether it’s art or not,” he says. “Now we are sure that it can be art, because it’s not tied with reality.”