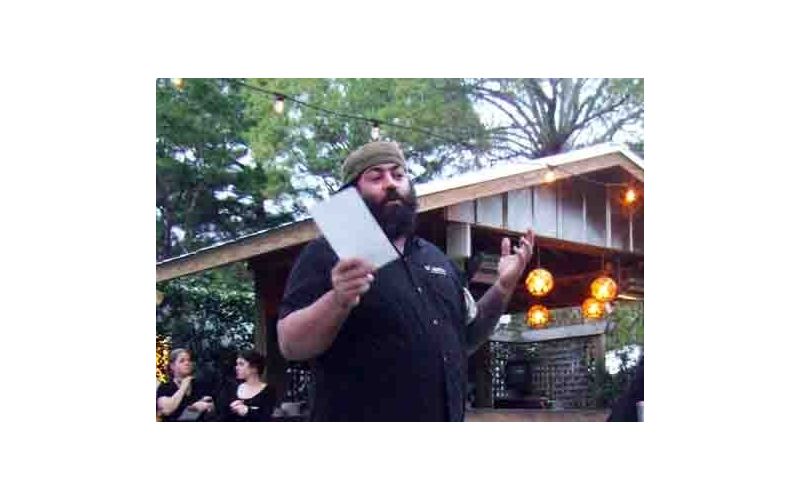 At 17 North Roadside Kitchen’s beer dinner debut in January, Chef Brannon Florie and his kitchen team paired five-courses of Asian and Southern style dishes with ales from the San Diego’s Stone Brewing Co. It was an impressive feast in a cozy dining room. At their second beer dinner on March 12, Florie and company served an elaborate Lowcountry-themed menu to a larger-than-expected crowd on their spacious back patio with lagers and ales from local microbrewery Palmetto. It was a rich and joyful affair.

Florie, bartender/server Will Cook and Palmetto rep Chris Winn presented each course and spoke about the long history of the brewery, the local ingredients and artwork involved in its production, and the alliance between the brewery and local farms like Legare Farms on Johns Island. Palmetto co-cowner and head brewer Ed Falkenstein told stories about the original Palmetto brewery’s heyday in the 1800s and before Prohibition.

Up next was a spicy reworking of shrimp and grits. Local shrimp, blue crab meat, and creamy Geechee Boy grits were wrapped in house-seasoned tasso bacon and dolloped with a zesty tomato beer foam made from Palmetto Lager. The nicely balanced, golden, slightly hoppy lager provided crisp relief from the red pepper spice of the dish.

A newly rejuvenated version of the Palmetto Pale Ale went over very well as the second main course of fried Milgrove Farms chicken and mushroom perloo arrived. Palmetto started using citrusy Falconer’s Flight hops in the brew, which add a nice, tangerine/pine accent to the finish. The perloo, made risotto-style with Carolina Gold rice and Mepkin Abby Oyster mushrooms, was rich and earthy with bit bits of pecan, fried chicken skin, and flavorful roasted chicken consommé around the side of the bowl.

The caramel character of the maltier Palmetto Amber complemented the peppery and smoky flavors of the double-pork course of collard-wrapped pulled pork Shoulder and a side of long-braised pork belly. The crumbly bread and cheese of the side of mac and cheese was a nice touch.

The sweetest dish and the roastiest beer of the evening came last. Florie’s “Not Traditional Pecan Pie” was like a caramel-glazed pecan pie cookie, topped with a perfectly candied pecan on top. Palmetto’s black, malty, coffee-infused Espresso Porter balanced the sugary sweetness of the dessert with a nutty coffee flavor and aroma. It was a tasty meal-ender, but this pairing would make a terrific brunch course any time.

After dessert, Winn brought out a surprise serving of one of Palmetto’s latest experimental beers: the Ginger Slap. The amber-colored ale was fermented with large doses of fresh ginger and cardamom, creating an eye-openingly spicy and refreshing combination of aromas and flavors.

Charleston Beer Exchange proprietor Scott Shor survived two back-to-back beer events this week — the debut of the Cask Beer Night series at Ted’s Butcherblock on Wed. May 30 and a five-course Italian beer dinner at Bacco Italian Restaurant in Mt. Pleasant on Thurs. May 31. He kept his cool at both gatherings and helped present some fine beer pairings.

Homebrewers and micros team up for the Lowcountry Beer Festival

CHSWFF: High-grav ales and spicy fare at Closed for Business