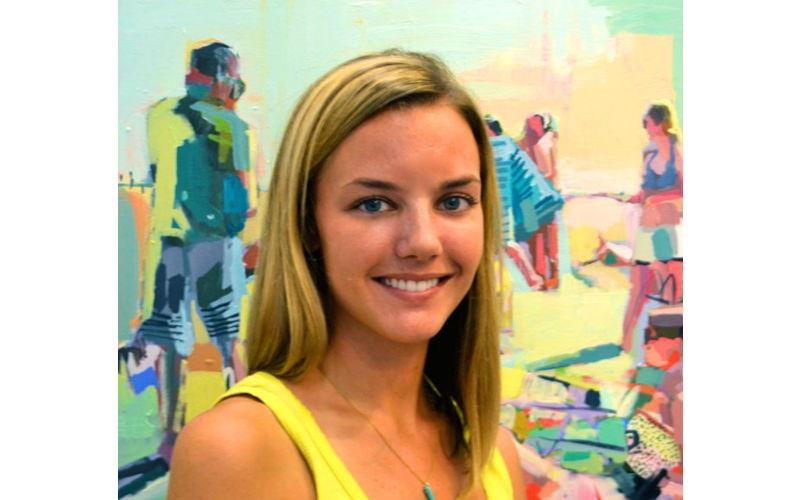 If you want to see Teil Duncan’s paintings, don’t bother looking in any Charleston galleries. You’ll have to call her up or shoot her an email and make an appointment to stop by her Redux studio to see what she’s been working on. Or you could just head online, where she sells most of her work. Her bright, bold paintings owe a debt to both the impressionists and the abstract expressionists — her scenes are filled with people depicted in angular brushstrokes in a rainbow of colors.

Because she’s not currently represented by a gallery, Duncan doesn’t get the kind of attention some local artists do, but she’s plenty busy. By choosing not to hand over 50 percent of the profits from her work to a gallery (a pretty standard rate), she’s taken the business end of the art world into her own hands, in effect expanding her reach worldwide.

Duncan is fairly new to this game, but she’s playing it well. She’s been artistic all of her life. She majored in art at Auburn University, and made money on the side by painting commissions after moving to Charleston. But she didn’t realize she could make a career out of it until she discovered local abstract painter Sally King Benedict.

“I had kind of given up on being an artist as a career,” Duncan says. “I didn’t think it was possible in this economy. But then I saw her just killing it, and I just quit everything, quit all my jobs and decided to put all my eggs in that basket. I joined Redux and started painting full-time.” That was two years ago this month.

Duncan tried going the gallery route for about a year, but soon got frustrated. “It went really well, but the pace of it was kind of slow,” she says. “I don’t want to bash the galleries, because I’m grateful for that experience, but when you have to up your prices, and they’re only exposed to like 30 people a day, the chance of one out of 30 people spending a couple thousand dollars on a painting is kind of slim.”

Looking for a more sustainable model and inspired by fellow Redux artist Lulie Wallace, Duncan took her work online and opened a shop on Big Cartel. She’s only been selling online since March but already sounds like a pro.

“If you have a product that’s affordable, and it’s not thousands and thousands of dollars, and you get traffic of hundreds of people looking at your work each day, then the chances of selling a $300-$500 painting are pretty good,” she says.

But how does one attract that all-important traffic? It’s simple enough for Duncan, who emails her favorite bloggers when she finishes a new body of work. “A handful of them will feature me on their blog, and once that happens, it sends all the traffic to my website, and I can sell up to 30 paintings in a day.”

Because of the higher demand, Duncan switched from oils to water-based paint so she could produce work more quickly and cheaply. There’ve been other benefits to working with water-based paint as well. “With the water-based paint, I feel like I’ve been able to learn so much more about color. It dries so quickly, within seconds, that if the color’s not working, I can paint right over it. With oil paints, if it’s not working, I have to wait like five days. It’ll be interesting to see the process switching back to oils.” She’ll reserve the oil paintings for any galleries she might work with in the future, if she can find the right fit.

These days Duncan tends to work in series, and her most recent one focuses on vibrant, abstract beach and pool scenes. She snaps photos on her iPhone when she’s out and about, then uses those photos to inspire a painting. She eventually abandons the photo altogether, abstracting the image and bringing in her own color palette.

“Whenever I’m sitting on the beach or in the park or really any public area where there are people interacting, there’s something about it that intrigues me,” Duncan says. “When I look down the beach and see all these colorful bathing suits, towels, umbrellas, bags, it’s very visually stimulating for me.”

Find out more about Teil Duncan and see her available work at teilduncan.com. She’s open to visitors at her Redux studio by appointment.