Olivia Jean on surf music, Third Man, and being in charge 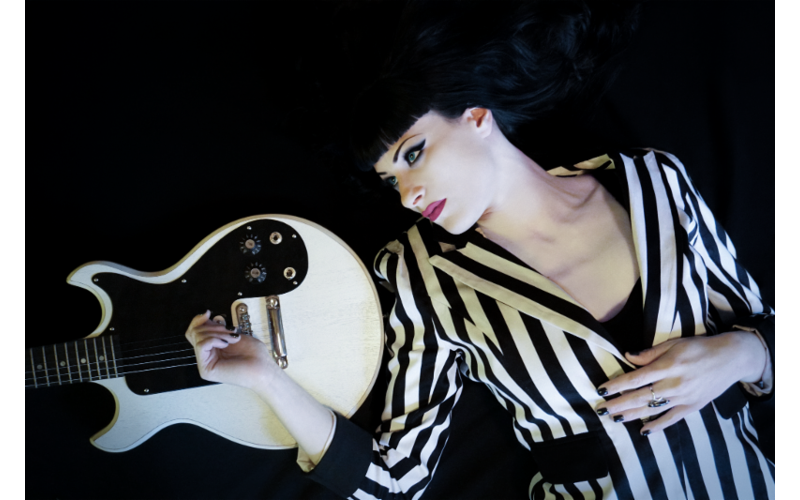 Olivia Jean is perhaps best known for her work as a session player for Jack White’s label, Third Man Records, and as the lead singer and guitarist for the all-female garage rock band, The Black Belles. Still, ever since this Detroit native decided to step out of the shadows as a solo artist, she has been causing quite a commotion in her adopted hometown of Nashville and beyond. We recently caught up with Jean by phone for a quick conversation ahead of her headlining appearance at the Pour House this Sunday, which will serve as the finale for this year’s Rockabillaque festival.

City Paper: Detroit isn’t exactly known for having a surf scene. What drew you to that kind of sound early on?

Olivia Jean: Yeah, there’s no surf scene that I’m aware of in Detroit! One of the first bands that I really got into as a kid, though, was the B-52s, and they tended to use a lot of surf elements. I also discovered at an early age that instrumental surf music was the easiest stuff for me to create at home, for my amateur recordings, where I would be playing all the instruments. Later on, I actually got to participate in a real recording session with Kate Pierson, which was definitely one of my more memorable moments involving that kind of work.

CP: You’ve been called a “retro-goddess” by the Detroit Metro Times, but your creative output hasn’t really been stuck in the past. How do you balance looking forwards and backwards at the same time?

OJ: I try not to be too throwback-y with my look or my music. It’s not like I’m saying to myself, “Oh, I’m a retro artist, so let me wear the uniform for that.” You know what I mean? I just love 1960s music and fashion, and I subconsciously incorporate a lot of that vibe into my style.

OJ: I’m not too much of a gearhead, and I wouldn’t call myself a collector, but I am lucky enough to get to use other people’s vintage equipment as needed. It always sounds better. I know that much.

CP: Was there anything in particular about the process of assembling your 2019 LP, Night Owl, that made it special for you?

OJ: With this record I had a lot of creative control in that I wrote, produced, and mixed everything, and I was in the room with the mastering guy the whole time, to make sure it turned out just right.

CP: Without an outside producer involved on this one, did you ever feel like you were a little too close to the art to be able to make objective decisions about the way it should be presented?

OJ: Yeah, absolutely. It’s hard to detach yourself enough to be able to listen to songs through other people’s ears, and to catch the things that you might have overlooked as the writer and performer. Even so, I like to be the one in charge, because I can hear everything in my head the way it’s supposed to be in the end.

CP: Do you direct your own music videos as well?

OJ: I haven’t directed any yet, although I have been heavily involved in the editing process. I like for my videos to be pretty plain and simple but with big and bold colors throughout.

CP: Overall, what has it meant for you to be part of the Third Man Records family?

OJ: It is very much like a family of musicians and bands and people that work at the label, who all love music so much. As an artist it means everything to have the support of a team that believes in what you are doing, and gives you the freedom you need to become who you really are. A lot of record companies would think that was too risky to do, especially for an unknown act. Also, just being based in Nashville now, because of Third Man, means that I can quickly pull together a top-notch road band any time I want to tour. That’s a really great position to be in as a solo artist.

Olivia Jean’s performance is the finale for the annual Rockabillique car and motorcycle show with live music in Park Circle on Sat. Nov. 9.

Monster Music and Movies, Soundwave and Record Stop are gearing up for the second Record Store Day drop on Sept. 26.