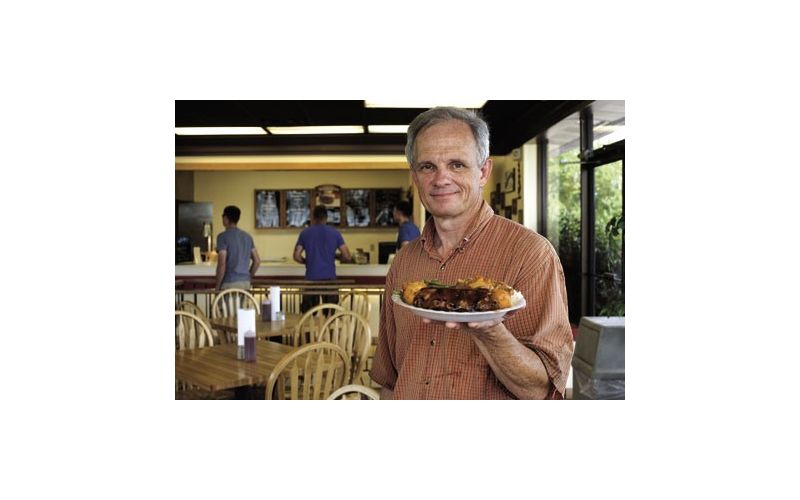 High on the Hawg

Back in 2002, The Hickory Hawg opened for business in a strip mall out on Johns Island, where they quickly earned a reputation for superior chopped pork and baby back ribs. Earlier this year, they moved across town into an old Wendy’s location on Rivers Avenue in North Charleston. Curiously, the move didn’t get the same amount of attention that North Chuck received when it stole the Boeing Dreamliner factory away from Washington state, but that just shows you how misaligned some people’s priorities are.

The Hickory Hawg keeps it simple and cooks classic old-school barbecue. This is no small accomplishment in this era of barbecue ecumenicalism, when too many restaurants try to satisfy all tastes by offering every type of meat under the sun and upwards of six different barbecue sauces on the table. The Hawg has picked its style — North Carolina Piedmont — and stuck with it. That means slow-smoked pork shoulders served with a reddish ketchup-vinegar sauce on the side.

This is also an era of “upmarket” barbecue, in which a procession of inspired entrepreneurs have tried to goose up their joints with sports bar trappings like a full bar with microbrews on tap or a selection of appetizers like jalapeño poppers and tater skins loaded up with barbecue. Or, even riskier, with fine dining trappings like white tablecloths and a wine list.

The Hawg is having none of that. You order at a counter, and you get your ‘cue on styrofoam plates with plastic forks. The plain wooden tables have just a single squeeze bottle of barbecue sauce and a big roll of paper towels on them. A sign by the counter reads, “No smokin’, no swearin’, just eat’n,” which is pretty much all the guidance one needs in life.

Since moving out to Rivers Avenue, Hickory Hawg has slimmed down its menu somewhat, and there’s virtue in that simplicity. There’s a pork plate ($7), chicken plate ($8 dark, $9 white), and baby back rib plate ($11), each served with two sides and hush puppies. The meats are cooked in the small screened-in, tin-roofed pit room that’s been added to the back of the building. Inside is a big, black cooker that’s fired only by wood — yes, wood — over which they cook pork shoulders for 12 long hours.

The result is splendid. The pork is chopped into medium-fine bits with little shreds of the reddish-black outside meat mixed in. It’s perfectly good unadorned on a barbecue plate, but, for my money, it’s even better on a sandwich. Served on a hamburger bun with your choice of pickles or slaw (I recommend both), the meat is chewy and smoky and has just the right balance of meat-to-bun-to-pickle/slaw crunch. At six bucks for a Little Hawg Combo with fries and a drink or seven bucks for a larger sandwich on a Big Hawg Combo, it’s economical, too.

The Hawg’s combo ketchup/vinegar sauce is thick and red and studded with bits of black pepper. It’s a little sweeter and more viscous than the actual variety you would find up in Piedmont towns like Lexington, N.C., but it does ample justice to the pork.

The chicken is fall-off-the-bone tender with a nice, smoky, pink-tinge, but it’s a little dry, and I found myself wanting to slather yellow mustard sauce over it. This is the Hickory Hawg, not the Hickory Chicken, though, and the pork is where the action is. In a region not known for its ability to cook ribs, The Hickory Hawg has earned a well-deserved reputation for their baby back ribs ($11 for a plate, or $2 per rib a la carte). They’re slathered in that tangy red sauce, ard they’re meaty, smoky, and as tender as can be.

The side items are traditional: french fries (the crinkle cut kind), baked beans, green beans, collards, and two varieties of coleslaw. I’m a particular fan of the barbecue slaw, which is made from finely chopped cabbage and dressed up with a big hit of vinegar and the tangy red barbecue sauce. In good ole North Carolina Piedmont fashion, all the plates come with three golden crispy hush puppies that have a nice cornbread flavor.

The Hickory Hawg does make one accommodation to the South Carolina tradition by including hash and rice on the menu, and they must have picked up some tricks from the local boys because it’s pretty good. The hash is thick and brown, and when ladled over the white rice, it makes for a spicy, chewy side.

So take note, Mayor Summey. Those boys from Boeing may be boosting the economic outlook for North Chucktown, but on the culinary front, The Hickory Hawg is providing a pretty substantial stimulus of its own.

Graft Wine Shop co-owners Miles White and Femi Oyediran opened the doors to the King Street retail store and bar over the weekend for the first time since the onset of the pandemic. Initial opening hours for bar service will be Thursday through Sunday from 5-10 p.m. “We just wanted to wait until we felt […]