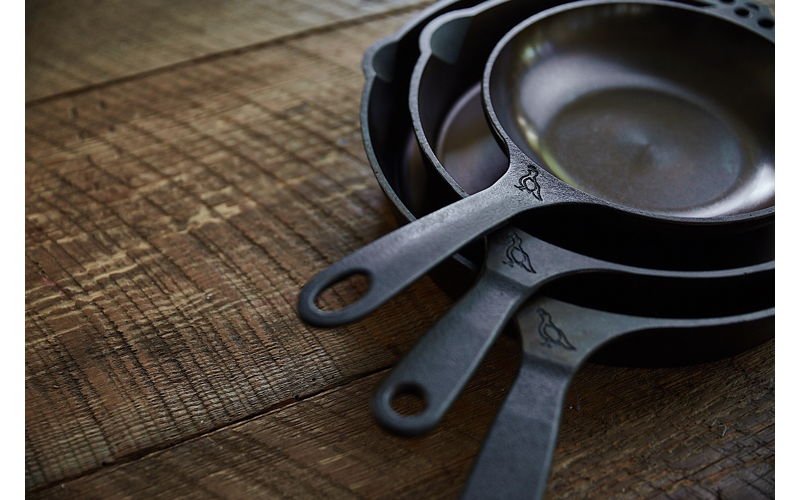 Three years ago, Matt Register appeared on The Today Show with Al Roker to cook pork belly and sweet potato hash. Register, owner of Southern Smoke BBQ in eastern North Carolina, was the star of the segment, cracking wise with Roker like an old pal.

The unsung standout that morning, however, was the skillet on the stove. It’s impossible to tell from watching the clip, but that unassuming cast-iron cooking tool was made by Charleston’s own Smithey Ironware Co.

Register didn’t purchase a Smithey on a whim prior to appearing on national television. He has a deep affinity for the brand.

“They’re great products, and they’re beautiful,” he says. “If you walk into my restaurant right now, we have two of the 12-inch skillets where every customer can see them. They’re greased, seasoned, and ready-to-go.”

Register is a Smithey aficionado, of sorts. The celebrated chef has three or four Smithey skillets at his restaurant, two at his house, and another three at his beach home (“Because cast iron is a bit of a pain to travel with.”) He was introduced to the company at the Charleston Wine + Food fest four years ago. That’s where the love affair began.

“I bought one of their pans and absolutely adored it,” he says. “I haven’t used anything else since.”

Register says he doesn’t receive Smithey products for free. He has to purchase them, just like everyone else. But he’s a vocal champion of the brand, so much so that an interview with him can sound like an infomercial. He praises the skillets’ aesthetic appeal, heat distribution, easy clean-up, and even their packaging. “It’s so beautiful that you want to sit it on your counter and look at it.”

Register is also a fan of the people behind the Smithey name. “When you look at one of their products, you know the time and love that’s gone into it. They’re good people, and I like dealing with them,” he says.

The company began with one guy, Isaac Morton — a Durham, N.C. native — and his passion for restoring rusty old cast-iron skillets. He’d refurbish them — “I’d dip them in a bath with an electrical current running through it to derust them” — and distribute them as gifts.

Before long, he began considering the via-bility of turning his hobby into a business. He studied the market: how many vintage skillets sold each quarter on eBay? Were people really interested in cast-iron cookware?

Indeed, they were. So Morton — who lived in San Francisco and New York before relocating to Charleston in 2005 — decided to go for it. It wasn’t a leap of faith, per se. “I’m not a ‘jump into it’ kind of character,” he says. He knew success was probable, he just wasn’t sure how much.

“When I began, it was, ‘can I make a lifestyle out of this? Can I enjoy doing this?'” he says. “It turns out that I could. And it’s become bigger than I expected.”

Smithey which launched in 2014, and is now a 12-person operation, housed in a 5,000-square foot building on the former Navy base in North Charleston. Smithey products are carried in 70-plus retailers nationwide, from South Carolina to Minnesota to Hawaii.

Their logo, designed by Charleston-based Stitch Design Co, is a California quail. It’s a nod to Morton’s time as an outdoorsman in northern California. “It’s a popular bird to hunt in the upland Sierra — a tasty game bird,” he says. “Plus, many people associate cast-iron with camping and cooking outdoors, so a quail logo seemed like a good fit.”

Smithey specializes in hardy cast iron cookware that prides itself on durability and practicality. In theory, a true Smithey, as the company’s Vice President Will Copenhaver explains, shouldn’t last just your lifetime, but maybe your kid’s lifetime, too.

That idea lies at the heart of Smithey’s philosophy: in today’s throw-away culture, during a time in which consumers expect to be scammed at every turn, Smithey strives to exude authenticity and longevity.

“There was an era when people would inherit their grandmother’s skillet,” Copenhaver says. “And the reality is, most of us don’t do that anymore. So what we’re trying to do is create a product that can be passed down through the years.”

This idea of generational cookware isn’t new in itself. Instead, as Copenhaver suggests, Smithey wants to revitalize an extinct (or at least dying) tradition for the next generation. Wapak. Wagner. Griswold. These are the now-extinguished brands whose products Morton loved collecting and restoring. He honors their spirit in his own creations.

“It starts as a tool, then it becomes a possession,” he says of Smithey products. “It becomes something people display in their kitchens, something they want to care for.”

While the Smithey story is about one man’s vision, it’s also about community. Morton praised everyone from Smithey’s PR firm (locally based Leapfrog) to Stitch, to their landlords and neighbors — “from a baker to a boatbuilder to a blacksmith to a company that makes shafts for nuclear submarines. It’s a Charleston success story, and we hope it’ll continue to be,” Morton says.

The Charleston-Smithey connection goes even deeper, though. With the city becoming a nationally heralded culinary destination over the past decade, it makes sense that this is where a cast-iron company with lofty aspirations would plant its roots. There’s also the fact the Smithey brand can be viewed as a metaphor for the city as a whole: steeped in history, yet modern and forward-looking.

So, let’s go back to Register’s appearance on The Today Show. That was perhaps Smithey’s first time in the national spotlight. But if all goes as planned, it won’t be its last. Morton says he refuses to sacrifice quality — “we’ll maintain high-quality, cast-iron cookware” — but it’s also clear that he’s shooting for the moon.

“We have every intention of being the next great American cookware company,” he says. “We have a long way to go, but we believe that we have that potential.”