The Power Of Memory 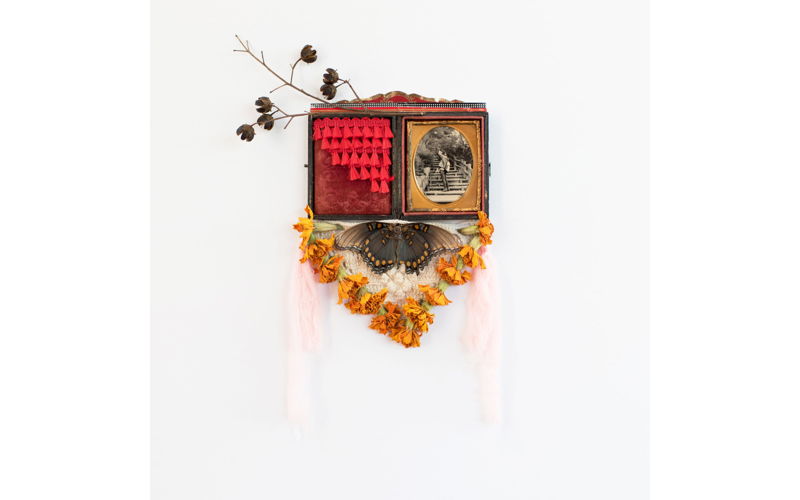 Keepsakes, the new exhibit by Nina Garner currently on display at Beresford Studios, is remarkable both for its detail and its sense of memory. The series of photographs is remarkably consistent in tone; against a stark white background, Garner decorates union cases (small, plastic boxes with velvet-covered insides and decorative designs on the outside) with vintage-looking black and white photos centered inside, the kind you might see in a family scrapbook. Streaming from these union cases are intricately interwoven flower arrangements and other elements of nature (like a butterfly) suspended among them.

The arrangements are an homage to Garner’s roots in the South, and in Japan; her mother is from Okinawa, and her father grew up in Alabama. The arranging style draws from the Japanese ikebana tradition, which translates to “living flowers,” and the actual flowers themselves are from her own surroundings in Charleston.

“I use my materials from local landscapes,” Garner says, “from my backyard or something I picked, like wisteria. And most of the photos from this show were taken of my family in Japan.”

In one sense, these creations are an outgrowth of her early interest in photography, which drew her towards both nature, and an informal style of portraiture that she calls “untraditional.”

“It started when I was in high school,” she says, “when my father gave me my first 35 mm camera. I went to high school in a small town, and I didn’t have a lot of friends or a lot of things to do, so that was kind of my outlet. I love photographing the outdoors, landscapes, my family . . . that’s always what I was interested in.’

Garner preferred her portrait subjects to be as non-posed as possible, often simply photographing her family walking around on vacations or even making sure not to include their faces in the photos.

“I don’t always show people’s faces, so people can relate more to the people in the photos,” she says. “I like to keep things spontaneous so that they don’t feel so staged. I photograph my family when we’re on trips and just walking around, and I try catch them off guard. I think people are more comfortable not looking at a camera.”

But in a broader sense, the pieces in Keepsakes are about the memories that are precious to Garner, and the objects that become part of a family’s tradition.

“I chose ‘Keepsakes’ as the title because I’m drawn to the concept of an object that’s passed down between family members through generations,” she says. “But I feel like a keepsake can be more than just an object; it can be a memory or feeling. That’s what I try to capture in my photographs: A memory.”

Garner used the union cases not just because they created an attractive framework for her photos and flower arrangements, but because they themselves often became keepsakes. “I was really drawn to using union cases, because back in the day, people would treat them as special objects and display them in their homes and pass them down,” she says. “That’s why I incorporated them.”

Even in creating the pieces, Garner relies on methods from the past, which makes it a more time-consuming but rewarding process.

“It takes a long time, just because I do use a film camera,” she says. “So, there’s developing and printing in a dark room. And all my photos are stained with coffee to give them a kind of vintage look, so it takes time to dry, as does collecting the materials and working with all of them in my studio.”

Rather than having a finished product in mind, the materials often dictate Garner’s direction.

“It comes as I create,” she says. “I don’t start with any specific idea. It starts with the materials that I found that inspired me in the moment, and then I play for hours in the studio to see what works and what doesn’t. If I don’t like where it’s going, I start all over again.”

Garner says that, though she’s often reluctant to project any opinions onto those that come to see her work, she does hope that Keepsakes awakens certain feelings in those who come to see the exhibit.

“I don’t like to push my ideas on people, but I guess generally, I’d like to convey an appreciation for nature, and I want people to feel a little nostalgia from the work,” she says. “Maybe they’ll think about their own lives and their own memories.”