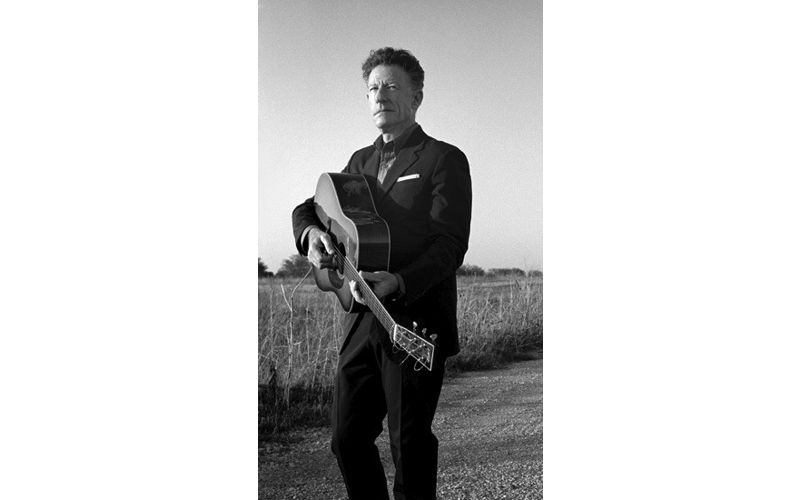 When it comes to Lyle Lovett, it may be a case of, “When you come to a fork in the road, take it.” If so, that fork’s been a long time coming. After a 25-year long recording career, Lovett has parted company with Curb Records and become a free agent.

The cover art of his last album for the label, released a few weeks ago, says it all: a monochrome pic of Lovett on an empty stretch of gravel road, standing straight as an exclamation point, and bound, neck to ankle, in a lariat. The valedictory album’s title? Release Me. It may not be as enigmatic as the cover of Abbey Road, but fans will recognize it as typical of Lovett’s sense of humor. And it’s not just a smart-aleck joke. At 54, the Texas singer-songwriter with a handful of Grammy awards and 14 albums to his credit seems to be underscoring this as an important transition in his career.

Of his now former label, Lovett has nothing but good things to say. He’s quick to point out that they took a chance on him when no one else would and granted him latitude over the course of all those albums to meander around jazz, country, blues, folk, swing, and gospel styles. Those wide-ranging tastes are the reason he became known as “eclectic.”

While Release Me has garnered mostly positive reviews, it’s also taken a few knocks in the press. The phrase “contractual obligation album” sits brooding in the background of this effort, solid though it is, largely because of frustrated hopes that it would bring with it a fresh helping of Lovett originals. In fact, all but two of the album’s 14 tracks are covers. Lovett merely notes that he’s taken this opportunity to feature songs he’s played in concert for years, but had never recorded.

Release Me includes tunes penned by Townes Van Zandt (“White Freightliner Blues”), Chuck Berry (“Brown Eyed Handsome Man”), Frank Loesser (“Baby, It’s Cold Outside”), and Michael Franks (“White Boy Lost in the Blues”). The title track, made famous by Ray Price, gets no special treatment, but the Jesse Winchester number “Isn’t That So?” sounds vigorous and renewed. Lovett has always counted among his notable gifts the ability to make every song — whoever the author — his own.

Musically, the album does not disappoint, easily reaching the standards you’d expect from Lovett and his Large Band. Longtime bandmates — drummer Russ Kunkel, bassist Viktor Krauss, guitarist Dean Parks, and pianist Matt Rollings — set the pace and mix it up seamlessly with guests like k.d. lang and Kat Edmonson. Nickel Creek’s Sara and Sean Watkin put in an appearance on one of the album’s originals, “Night’s Lullaby,” a tune Lovett wrote for and performed in the Shakespeare Center of Los Angeles’ 2011 production of Much Ado About Nothing in which the three appeared. “The Girl With the Holiday Smile” is the other Lovett-penned number, previously released on his holiday EP Songs For the Season.

Lovett has always been considered a songwriter’s songwriter. He intended this album, he says, to be a “punctuation mark” on his association with Curb, adding that the reason more originals didn’t appear on it is simply because he didn’t have new songs that he liked enough to make the cut. Better that than to fob off a rehash compilation under the guise of a retrospective. Lovett respects his fanbase.

Even as he admits that his future is largely undetermined at this point, he’s clearly all-in with this transition. Lovett fans have had the chance to see that enthusiasm on display as he recently made the rounds of TV talk shows. His current tour has him alternating between performances with his Large Band and acoustic-only shows like the one he’s bringing to Charleston.