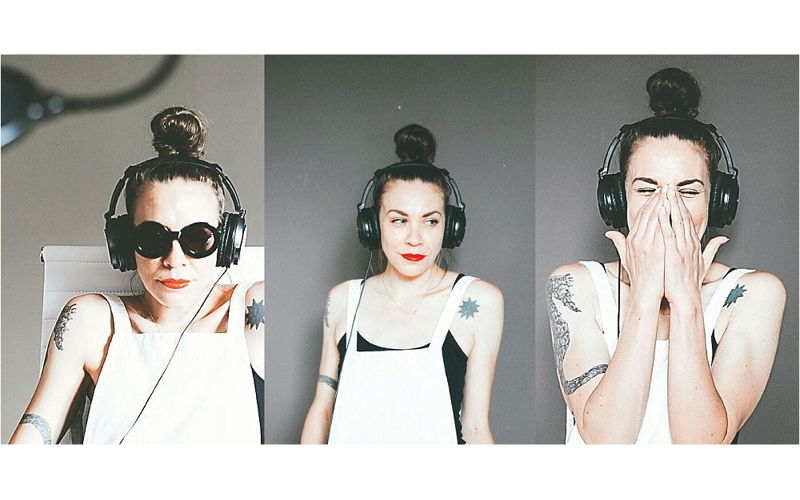 “I wanted to take the piss out of F&B, while still appreciating everything about this industry.” That’s how Lindsay Collins — a server at FIG who also worked at Per Se, the French Laundry, and Noma — describes her new podcast, Effin B Radio, a show dedicated to the hilarious side of fine dining. And thank god. I was beginning to think the world of food podcasts would be limited to breathy whispers on factory farming and smug discussions on the greatness of navy bean soup. (Sure you’ve tried canned navy bean soup, but have you had navy beans farmed by authentically sourced sailors?) Finally someone sees the lighter side of our nation’s culinary obsession and damned if it isn’t one of our own. The best part? Collins’ Effin B Radio is honest-to-Pete laugh-out-loud funny.

Collins grew up outside of Aiken and got into waitressing at age 17 at the now defunct Charleston Chops. After dropping out of CofC to attend Boston’s Berklee College of Music for piano, she continued to support herself with waitress positions. But she says it was in New York City, where she got serious about serving as a career.

“In New York, you can’t get New York jobs without New York experience,” Collins says. So she took a gamble and applied at Thomas Keller’s Per Se.

“They had a thing on their website that said, ‘Submit resume or statement of motivation.'” I chose to write an essay and talked about my connection with food and how, at that time it was 2007, grits were all the rage in menus all over the country. I talked about how I get protective with grits being from South Carolina. I yearn for that nostalgic relationship of my mom making grits every day.”

The essay worked and Collins got the job. But the rumors of Per Se’s wickedly intense work environment were true, and Collins felt the heat from the start.

“I had the chef say to me, ‘You break one more thing, you’re fired. Have a good shift,” Collins recalls. Fortunately, she managed not to break anything. Eventually she grew from klutzy newbie to an integral member of the team. In 2011 she was awarded a scholarship to intern at Cophenhagen’s world renowned Noma.

“I was there for 4 1/2 weeks in their kitchen, and I was working in the front and staging in the kitchen and rest of the time learning in the dining room. The reason was to compare and contrast Michelin star restaurants in Scandinavia and America.”

When Collins returned from her visit to the four-time winner of Best Restaurant in the World, she thought maybe cooking was her real passion. Keller, however, cautioned Collins that server-to-chef was a tough transition and instead invited her to work as the expeditor of his French Laundry restaurant. The trip to California quickly turned into a year, and Collins ended up helping in the kitchen and later working at Keller’s Bouchon Bakery full time.

“Then I got surprise pregnant,” she says. Yearning for home, Collins returned to the Lowcountry, and after having a second baby 16 months later, she went looking for a serving position in Charleston. Naturally, she landed at FIG.

Now, with over a decade of fine-dining experience, Collins has decided to give podcast listeners some lighter fare. Episode 1 of Effin B Radio, co-hosted by FIG bartender Nikki Anhalt and former FIG server Phil Cohen with guest ramen maven Jeffrey Stoneberger, is a charming romp of a listen. It opens with Cohen discussing his nickname when he started at FIG.

“The sous chef called me Back Sweat for about six weeks. ‘Hey Back Sweat, can you grab me that?’ …And I was front of the house,” he jokes.

Anhalt chimes in, “Well, I had a bar-back at Fish who was like, ‘Hey, Captain Sweatstache.'” The trio erupts in laughter.

This is the other side of restaurants, the kind of talk staffers have behind the scenes, and Collins thinks it’s just what our current culinary climate needs right now.

“Let’s just all take a breath and sort of chill,” she says. “This whole thing started because front-of-house people are the most charismatic, usually funny, quick-witted, quick-on-their feet people. We work in a really enclosed environment. Things happen before service that the guests, self-proclaimed foodies, never see. What they see is what Keller called the best version of ourselves. But when we go into the wait station, what are the things we talk about and who are we really? That’s what we want to put out there. It’s not about talking about the guests or slamming other people or shit talking. We’re exposing a side that no one ever sees.”

Of course there is talk about food. On Episode 1, the hosts suss out the particulars of executing excellent ramen. Kudos are given to Stoneberger for his blue crab broth, but there’s no air of mystical reverence. When Stoneberger says he has an off-menu special, “We call it crab pasta, but there’s no crab in it. It’s the idea of crab pasta,” Collins zings, “Dude, that’s fuckin’ deep.”

Suffice it to say, Effin B Radio is a pretension-free zone, and Collins’ peers in the industry are heralding it. Even her boss at FIG is on board. “I asked Adam Nemirow, FIG’s co-owner who has an incredible sense of humor and is such a funny guy, if he’d be on the show and he said yes before I could finish,” says Collins.

Episode 2 includes guest Kyle Norton, the owner of 167 Raw and includes both an ode to recently slain bartender Eric Brantley and a discussion of the 2016 James Beard Awards. “Does Brock make a reference to whiskey at the awards? Does he say fuck? I don’t know,” Anhalt kids, to which Cohen responds, “Are the two words Waffle House coming out?” It’s all in jest here, folks.

Episode 3 will be taped in L.A. and released on May 6, the same day Effin B Radio goes live on iTunes. That episode will star former French Laundry chef Tim Hollingsworth, who recently opened L.A.’s Otium.

Collins plans to release a new episode weekly and hopes restaurant guests will become fans just as much as her friends in the industry.

“I think they’ll find it most interesting of all,” Collins says. “They get to be like a fly on the wall at the wait station. They can’t get a reservation to listen to that.”

Listen to Effin B Radio at effinbradio.com.