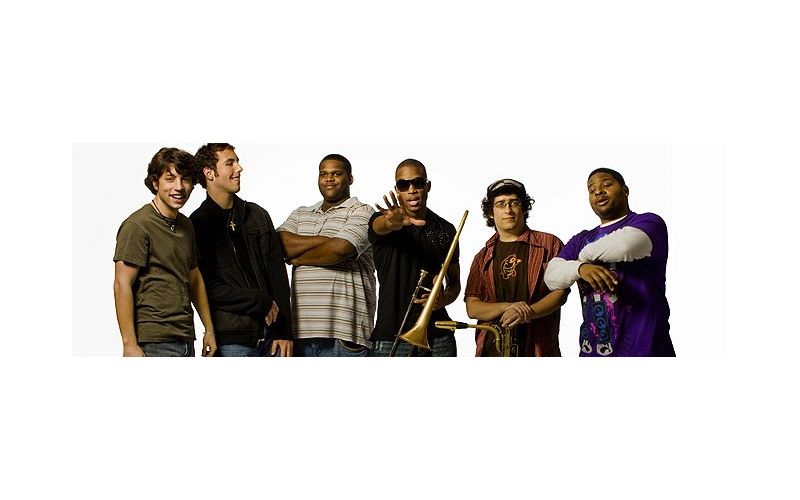 Traditional jazz aficionados, take careful note: Trombone Shorty and Orleans Avenue do not play the type of “jazz” you sit quietly in a smoky corner sipping Sazeracs to. In fact, you probably won’t sit down at all.

“Wherever we play, we find a way to get people up,” says 25-year-old Troy “Trombone Shorty” Andrews. “We come to have fun. That’s just the spirit of New Orleans.”

Andrews got his start as a 6-year-old phenom, leading a brass band through the French Quarter before his arms were long enough to fully outstretch his trombone. These days, he’s a worldwide sensation, performing on five continents in 2010 alone, and arguably the hottest Louisiana export since jambalaya and crawfish boils.

His major label debut, Backatown, garnered a Grammy nomination for Best Contemporary Jazz Album and topped Billboard’s jazz charts twice, including a second time in its 38th week of release.

“Things have grown and gotten much better, but it all comes from me being really passionate and honest about the music,” says Andrews. “The only thing I want to do is play my horn. I never thought about anything else except wanting to play my trombone. As long as I can play, I’m fine.”

Around the country, Andrews says he meets people who remember (or think they remember) seeing him play as a youngster in New Orleans’ Jackson Square. One fan recently brought Andrews a DVD of himself playing as a child, made from old home video footage.

A childhood immersed in music helped prepare Andrews for the constantly on-the-go lifestyle he keeps lately. Early on, his education came in the form of life lessons from street musicians like Tuba Fats and Uncle Lionel Batiste.

“They taught us the traditional style of music before we could have fun playing the contemporary styles,” says Andrews. “I played with my brother’s band and then created my own. We used the French Quarter as a practice space. We were always learning from the street legends out there.”

When he was 13, Andrews’ cousin, a member of the Dirty Dozen Brass Band, taught him the technique of circular breathing, allowing him to blow a continuous note on his horn for as long as he could endure.

“The longest I ever did was 23 minutes,” recalls Andrews. “I had just learned how to do it. I was playing with Tuba Fats in the French Quarter at a small private show. I remember that the band left the stage, got some food, and came back, and I was still doing it.”

Andrews’ education continued at the New Orleans Center for the Creative Arts (NOCCA), where he connected with the members of what would become the Orleans Avenue band that tours and records with him today. His playing history with percussionist Dwayne “Big D” Williams dates back to when they were both just 4 years old, while drummer Joey Peebles and bassist Mike Ballard were high school friends from NOCCA. Those two introduced him to Pete Murano (guitar), Dan Oestreicher (baritone sax), and Tim McFatter (tenor sax), who at 29 is the oldest member of the band.

Most of Backatown‘s 14 tracks are entirely original compositions. Andrews began writing songs at age 12 and composes at least a portion of a song nearly every day.

“I produce a lot of hip-hop tracks on the computer, collaborating with Mike [Ballard],” says Andrews. “Sometimes, we even bring in a country or bluegrass side. We’ll do jams at sound check with the band until it makes its way into the show. Once we get to the studio, we can rearrange and do even more with it. I’m probably writing a new idea every night.”

For their two-night Spoleto stand at the Cistern, Andrews says they’ll mix up the set lists and play two different shows. They call their music “supafunkrock,” while critics label them “contemporary jazz.” Whatever it is, it’s as close to the brass band street parades of New Orleans as we’ll probably ever find in Charleston.

“Throughout my show, you’ll be able to get versatility, music, and entertainment — everything all at one time,” says Andrews. “If they want to just listen, they can just listen and hear a bunch of stuff. If they want to get up and dance, they can do that too. We like to have fun on stage and show our technicality at the same time.”

The Cistern got supafunky Thursday night thanks to Trombone Shorty and Orleans Avenue. The New Orleans-based tromonist strutted onto the stage wearing sunglasses and a black polo shirt (both of which he later shed) and the band immediately lit into a jam session that had the audience grooving in their seats.

Danilo Rea combines elements of jazz, classical, and pop into one wild ride