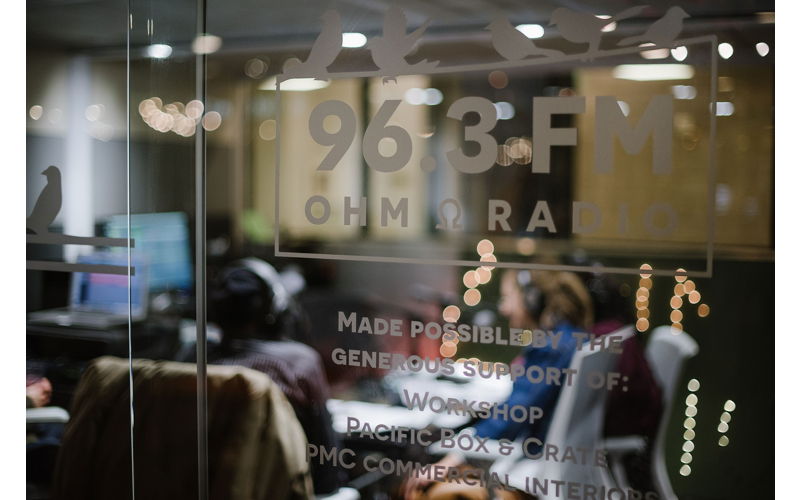 Joseph Floyd Manor, the 12-story building that sits at the corner of Mt. Pleasant and King streets, can be seen from the Ravenel Bridge. Driving into downtown Charleston from Mt. Pleasant, the building rises up, stark and square in its solidness. Depending on your aesthetic preference the building is an eyesore or an iconic structure. Either way, it’s hard to miss.

Most people in Charleston can point to the massive structure that is Joseph Floyd Manor (JFM), but few know what’s inside. The Manor, built around 1950 and originally called the Darlington Apartments, was purchased by the Charleston County Housing and Redevelopment Authority in 1979 and reopened as Joseph Floyd Manor in 1981. The building now houses low income and elderly and disabled residents.

Local nonprofit Enough Pie frequently hosts programs at JFM, and realized that it would be a good idea to sit down and record the stories of the residents, men and women who have lived in Charleston for decades. With Ohm Radio, Enough Pie recently launched a storytelling series, Tales from the Manor, which introduces listeners to JFM residents. Tales From the Manor is hosted by Charleston resident and creative Summer Anderson and JFM case intake specialist Jae Smith. Episodes air bi-monthly on Ohm Radio 96.3, Wednesdays at 1 p.m. and on Sundays at 3 p.m.

JFM resident Carolyn Jones, Tales from the Manor’s first guest, has written a poem about the building in which she resides. In her episode, currently available on Soundcloud, Jones talks about her home, the subject of the poem: “It’s bad to see people tearing down where you live.”

What is there to tear down about JFM? For many people, perhaps, the nitty gritty parts of life — like the slow, inevitable decline of the human body — are hard to face. The series producer, Enough Pie’s Bennett Jones, notes that a lot of people may not be comfortable walking into the building. And that’s where these human stories come in.

“A lot of people here have been here for a long time,” says Smith. “I can tell a lot of them are originally Charlestonians. There’s a deep history here. It’s exciting to see.”

Smith has a certain comfort level with the residents as someone who sees them everyday. But even she was surprised by the stories Carolyn had to share, ones she’d never heard from the woman she frequently interacts with.

“Carolyn’s episode really surprised me,” says Smith. “She’s a very quiet person, but something pushed me to ask her to be first. Seeing her being comfortable talking that much was a big thing for me. I didn’t know she had children, that she’d lost a child. That was like, ‘wow.’ I felt honored that she would share those things with us.”

Carolyn Jones is a living, breathing reminder of the world we live in — she shares the kinds of stories that we find in history textbooks. In her interview, Jones also talks about her childhood. “Being light skinned was hard in those days. I tried to explain, ‘I’m not white, I’m black,'” she remembers. “As a kid it was really hurtful, kids wouldn’t play with me. Still to this day, my own people treat me the same way. And I say, ‘I’m one of y’all.’ It’s really hard.”

Smith and Anderson, while new to the podcasting world, are adept interviewers, engaging with guests through a series of carefully curated questions, following interesting lines of thought wherever they may go. Anderson pulls questions and storytelling methodology from StoryCorps, a nonprofit whose mission is to record, preserve, and share the spoken word stories of Americans.

Jones talks about growing up in New York, her three kids, and the importance of education. She laughs thinking about how her kids turned out — pretty good, all things considered — without her ever having to pester them to get homework done, or pursue sports. “I didn’t badger them to do good in school, they just did,” says Jones.

At the end of Jones’ episode — each will be about 30 minutes — Smith finds the poem Jones wrote about JFM. She reads it:

“If you’ve ever been to Grand Central Station, that is what Joseph Floyd Manor reminds me of: the noise, the smell, the sound, and all the people heading in different directions. It looks like chaos, but it’s all in control, everybody knows why they are there. I’m proud to call Joseph Floyd Manor my home. I just wish everybody else felt the way I do about my home.”

Bennett Jones says that talk of new hotels, hot bars, or restaurants in town is all well and good — but some of the residents of JFM have even more interesting stories about where the cool old hangout spots once were. Jones mentions one such resident: “A gentleman’s family owned a restaurant on the Eastside; he was in the military and came back, and he talks about the changes that happened. It really echoes. And this was the ’80s.”

Recently the entire city, including current and former mayors John Tecklenburg and Joe Riley, respectively, celebrated the opening of a massive King Street hospitality complex, Hotel Bennett. The hotel’s celebration and its construction have been met with mixed reviews, but there was a notable thread of remorse-tinged nostalgia along the lines of, “I miss the Old Charleston.” The Old Charleston, though, hasn’t gone away entirely. Much of it exists, at least in memories, in the 12 floors of JFM.

“I moved here two years ago and it’s been interesting to hear about the city,” says Smith of her interactions with residents. Bennett Jones hopes that one day transcriptions of Tales from the Manor can serve as some sort of historical record of the way people once lived and talked in Charleston, mentioning that several local groups have expressed interest in the series for this very purpose.

“This is really gonna be a great project,” says Smith. “We see people on the outside, but we don’t think past it. The depth of what a person is and their journey is, is beautiful.”