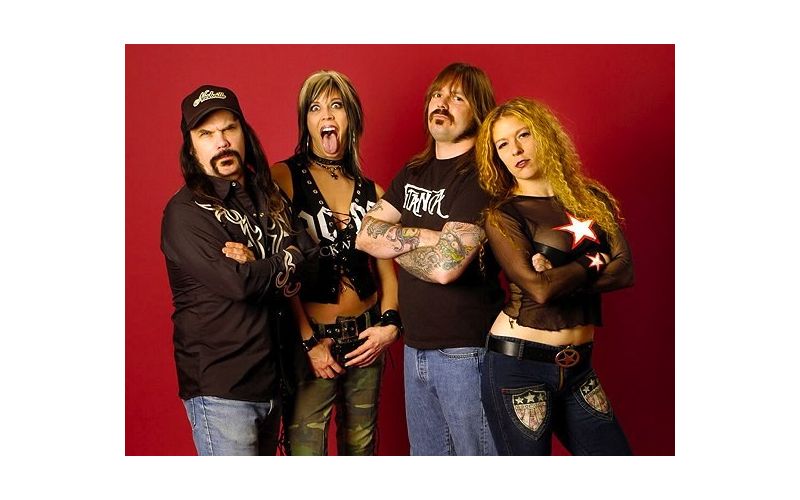 Most people don’t think of Canada when it comes to rawk. You know, the grimy, libido-charging raw rumble that signals either the approaching apocalypse, whiskey/beer-fueled good times, or a combination of the two. Ruyter Suys, the blond, six-string slinging Canadian bombshell for Nashville Pussy, assures us Canucks like to get down and dirty.

“Everybody’s pretty cooped up, and when they get a chance to rock out, they do,” says Suys, who has lived with frontman Blaine Cartwright in Atlanta for the last dozen years. “It’s like deprivation. When I lived in Saskatoon, I saw every band that came through.”

If “eh” was ever in her vocabulary, this guitar-bossing hard-body has long ago excised it in favor of F-bombs, dropping them with a frequency befitting a drunken frat boy at a raging backyard kegger. Then again, a party is Nashville Pussy’s natural preserve. Their combination of boozy bluster, backwoods boogie, and arena-ready roar suggests a Southern-fried AC/DC, though others might hear it differently.

“Basically, Nashville Pussy is a sped-up soul band. It’s white soul,” Suys explains. “We steal a bunch of Al Green stuff. You can’t tell. Al Green Gets Next to You is one of my favorite records of all time, and I bet we stole five riffs from that album alone.”

Okay, Ruyter, if you say so. “But AC/DC’s kinda a soul band too,” she adds with a laugh, noting that when Brian Johnson auditioned as AC/DC’s new singer, they had him sing Ike and Tina Turner’s “Nutbush City Limits,” a staple of Nashville Pussy’s sets.

The band formed in 1996 and made their debut with Let Them Eat Pussy. The punk-ish set flew by like a nitrous funny car spewing sexual innuendo and riotous good times.

Though they attracted a lot of attention for their saucy style and incendiary performances, they didn’t get a lot of help on the back-end. The band’s been perpetually bedeviled by label troubles. (Evidence of a vengeful God?) From dealing with major label mergers to surviving small labels going out of business, Nashville Pussy has experienced it all.

“We were kind of let down by a lot of labels. They have a tendency to get real lazy with us because we have to draw on our own,” Suys says. “So we’ve never had tour support.”

Even when it should be a slam dunk, they’ve had to grab the rebound. While strong in Europe, their label SPV’s American branch imploded just as a tour with Motörhead started, limiting the impact on the sales of their latest, From Hell to Texas.

“It could’ve been better, but it was still fantastic. It’s just like they missed out on an opportunity. But it’s just business. We don’t want to have anything to do with that. We just want to rock,” Suys says.

It’s a shame because it’s one of their finest albums — a streamlined blast of pure adrenaline thanks to tracks like “Drunk Driving Man” and “Pray For the Devil.” But it’s also an album that indulges a little finesse with some background harmonies on “Late Great USA,” “Give Me a Hit Before I Go,” and the infectious punkabilly rave-up “Why Why Why.”

“I think up until now we’ve been trying to establish ourselves as a rock band and I think that people know that by now,” Suys chuckles. “So now we can show off our girly vocals and shit.”

The finest track is “Lazy Jesus,” a chugging bloozy stomp reminiscent of ZZ Top, with a choir of backing vocals. It reimagines the Son of God as the couch-surfing carpenter offspring of a scornful father.

“Basically, everyone’s had a father that tells them to get off their ass and do something for a change. So Jesus is probably no different,” Suys says. “His dad missed out on all the exciting things he did. He changed water into wine, walked on water, healed the sick, all this shit, and dad wasn’t there to watch. ‘Damnit, dad.'”

You might get the impression from their fun-loving veneer and suds-soaked shows that they share a similar slothful demeanor. Quite the opposite. In their latest downtime, they finished a live album taken from their last European tour and remixed From Hell to Texas, adding some bonus live tracks.

“It’s 100 times better than it was before,” Suys says. “It sounds more like the way we wanted it to sound in the first place.”

She and Cartwright have also recently finished three albums. As the Kentucky Bridge Burners, the songs have to do with God and Jesus, but the music’s more Southern-baked soul and rock. They finished another album by their Southern rock band Buzzard. Plus she’s fronting a new act called Dick Delicious and the Tasty Testicles.

That’s what you get with Nashville Pussy — a sure tonic for boredom and an open invitation for a good time.