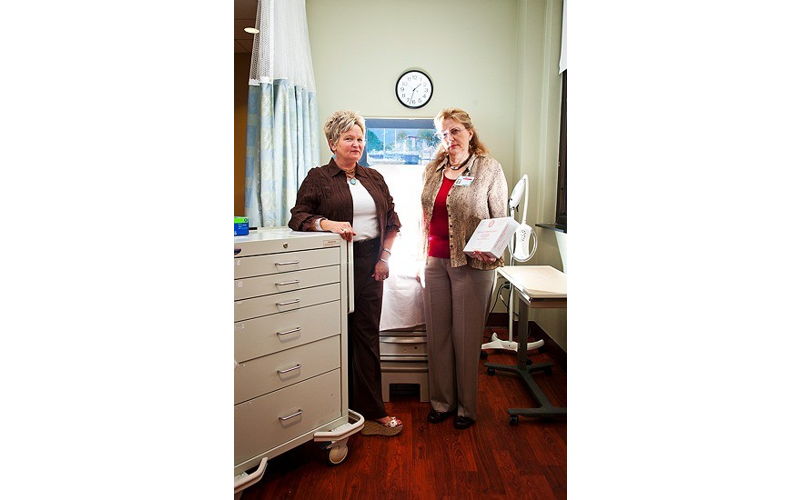 A Place to Come Forward

For two years, a special program at the Medical University of South Carolina has enabled nurses to collect forensic evidence in rape cases. Recently, that program got a new home and secured $35,000 in funding for a state-of-the-art camera system for evidence collection.

Nurses in the Sexual Assault Nurse Examiner (SANE) program used to do patient exams and interviews in what program director Kathy Gill-Hopple describes as a closet-like space at the downtown hospital, but they have since moved into a bigger room with natural light and ample seating for families. The new remote-controlled, high-resolution camera system is coming from Secure Digital Forensic Imaging, and it was funded by contributions from Charleston County as well as the cities of Charleston and North Charleston.

Gill-Hopple says SANE nurses need to have an extreme attention for detail. “It takes a certain kind of person and a certain kind of nurse to be able to listen to that and to respond compassionately and professionally and have all of the patient’s best interests at heart — but also be able to step out of it and be objective and do the evidence collection,” Gill-Hopple says. Currently, the program has three full-time nurses and six on-call nurses, all of whom went through special training.

SANE nurses have also been training police to deal effectively and compassionately with rape victims. Janet Ward, one of the full-time SANE nurses who has trained Charleston police, says part of her training session involved dispelling popular myths. “There is the myth that you have to be beat up, that you have to be completely torn up to be raped, and that is not the case,” Ward says. “Someone could look completely normal when they went to pick them up, and they have been brutally raped. And that’s the thing we just want the police to understand.”

A SANE examination can take two to three hours, followed by two to three hours of paperwork and evidence packaging for the nurse. If other people come with a patient to the examination room, the patient can decide who stays in the room while the exam and personal history interview are conducted. The patient also gets to decide whether the forensic evidence gets sent off to the State Law Enforcement Division for analysis.

“Sexual assault, it’s a control issue,” Gill-Hopple says. “It’s a crime of someone taking power and control over another person. And we can’t take that away, but we can begin to give that control back to the patient.”

According to Gill-Hopple, the SANE program is funded by MUSC and renewable federal funding through the federal Victims of Crime Act, and there is no cost to the patient. Once the evidence is submitted to law enforcement, analysis can take six to twelve months, she says.

Speaking at a press conference at MUSC on Aug. 15, Ninth Judicial Circuit Solicitor Scarlett Wilson called the SANE program “the gateway to the criminal justice system” and praised the program’s efficiency. “There have been instances where there have been reports made, where victims have been brought to hospitals, and the facility wasn’t appropriate, the delays were longer than they should have been, and they left. I don’t think that’s happening now,” Wilson said.

Wilson said that due to the nature of the judicial system, some of the first cases involving SANE patients are just now arriving in court, but she said the evidence collected through the program would be crucial in court. “Juries are expecting to see some piece of evidence offered, not just testimony,” she said.

Gill-Hopple has seen a marked increase in the number of victims going through the program this year. SANE treated just over 100 patients in 2011, and the number is already over 100 for 2012.