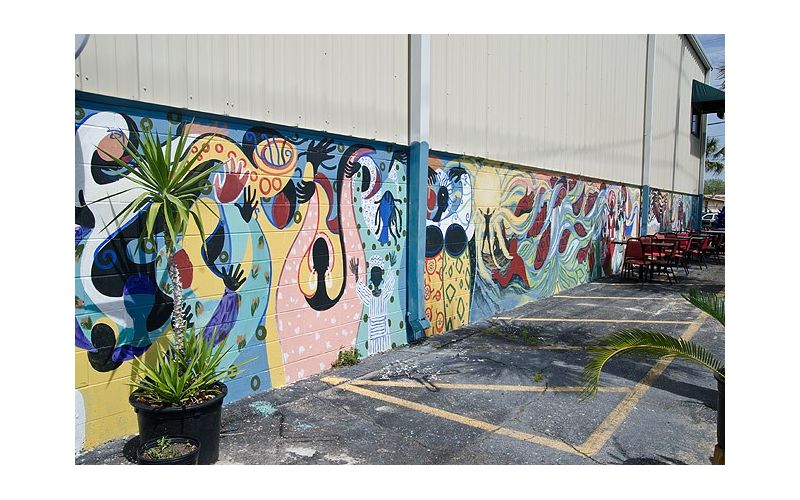 Charleston isn’t widely known for its public art. Occasionally a few murals pop up around town, but our visual identity is inexorably tied to traditional architecture and Rainbow Row. Even signage is tightly controlled, and public projects usually have a raft of red tape to confront.

But lately, the public face of Charleston has seen a splash of new colors. Thanks to the ChArt Outdoor Initiative in Avondale and Park Circle, the number of local public murals has tripled in the past year. And then there are the murals that have existed under the radar. The rising popularity of Charleston native Shepard Fairey had street art popping up all over town in the early ’90s, and while much of that is gone now, locals like Ishmael, Sheepman, and Patch Whisky have incorporated the street ethos into their own art and continue to produce public works.

Douglas Panzone, a.k.a. Sheepman, has a legendary stretch of Krylon along the entire backside of the strip mall that used to house Buffalo South on Folly Road. Although no new work has been done there in a year and a half, it endures as a beacon of street art in Charleston. Recently, he painted a mural on the side of Bert’s on Folly Beach, with Bert appearing as a pirate. Time-lapse videos of the process are floating around YouTube.

David Boatwright has taken the helm of more officially sponsored projects, like the giant wall fronting GrowFood Carolina on Morrison Drive. He also has two distinctive murals at the apex of two Market sheds downtown.

In 2008, local arts group Yo Art! Project sponsored a year-long mural project in the NoMo area that involved neighborhood kids from the nearby housing projects. It’s half a block long and has many distinct parts showing the different times and artists involved. Nearby, Studio PS commissioned Charles H. DeSaussure to produce an expansive historical mural with Gullah-inspired imagery.

The ChArt Outdoor Initiative boasts the lion’s share of new murals in town with more than 23 individual murals in the alleyways behind Avondale. Led by Lava Salon owner Geoff Richardson, the project incorporates large-scale work from a variety of local artists. His hope is to show more people how to initiate mural projects and pocket galleries in their own neighborhoods. “I birthed the baby, but I don’t want to raise the baby,” Richardson says. “I want to help create new babies around town.”

ChArt’s latest venture, a mural in Park Circle, will debut on April 22. The unveiling will include an art walk as well as a food truck rodeo, live music, and more. “It’s kind of a daytime Kulture Klash,” says Richardson.

If you spot any more that deserve a mention, let us know in the comments below.

Note: This is a public map and you can add additional murals here.

Born in Yemassee, S.C., Charlie H. DeSaussure currently lives in Charleston and works as a full-time painter. He got his start as a sign painter, and his work draws from memories of his Gullah childhood.

The Stroble Road mural project took place in 2008 and involved 75 neighborhood kids over the course of a year. Muralist David Boatwright mentored along with Jerry Rose and Beth Harley. One of the works was funded by the Charleston Housing Authority, and the rest were completed with money donated to the Yo Art! Project.

Charleston native John Pundt is a prolific screenprinter and graphic designer. After bouncing out to Atlanta and then to Savannah College of Art and Design, he returned to Charleston, where he has exhibited widely.

S.C. native David Boatwright, a graduate of the San Francisco Art Institute, spent time in California before returning to Charleston in 1984. He’s created many well-known murals on buildings throughout the city, including Hominy Grill, Taco Boy, City Market, and, most recently, GrowFood Carolina.

Hailing from West Virginia, Patch Whisky graduated from the Art Institute of Pittsburgh. His studio in Park Circle anchors one of the latest installments for the ChArt project there. His whimsical yet provocative work was recently featured in the Fuck Art exhibition at the Museum of Sex in New York City.

Sean Williams is from Beaufort, S.C., and studied studio art and art history at the College of Charleston. He currently works at Ahern’s Anvil creating metal work and does a variety of commissioned artwork including murals, signs, and portraits.

A commercial artist in the 1990s, Colin Quashie has since eschewed that field and has been producing challenging visual art about race and culture ever since. His latest installation at Redux includes a mural of his Plantation Monopoly boardgame on the art center’s exterior.

A 1974 graduate of the Atlanta College of Art, James Anthony has artwork all over town. His scenic Charleston murals can be found in most Crab House and Sticky Fingers restaurants, as well as the patio at the Rooftop at Vendue Inn. For Anthony, there is no competition. “I support every artist,” he says. “Let’s celebrate the God in us.”

Molly Rose Freeman recently moved to St. Louis from Asheville, N.C., where she kept a studio in the River Arts District and was a member of the Asheville Mural Project. She is currently working at the Contemporary Art Museum in St. Louis and gearing up to paint a mural in December at Art Basel in Miami Beach.

Born in Madrid to Cuban parents and raised in Florida, Ishmael now divides his time between Charleston and Asheville. Steeped in graffiti history and graphic design themes, he works with a variety of large-scale iconic media.

Originally from Jackson, Miss., Panzone got his moniker (Sheepman) for a character he often drew with a sheep’s body and a man’s head. He worked as a carpenter until going full-time as a muralist in 2007. His enormous works behind the old Buffalo South on Folly Road are legendary in the Charleston art community.

Colin Quashie’s pointed response to the world around him