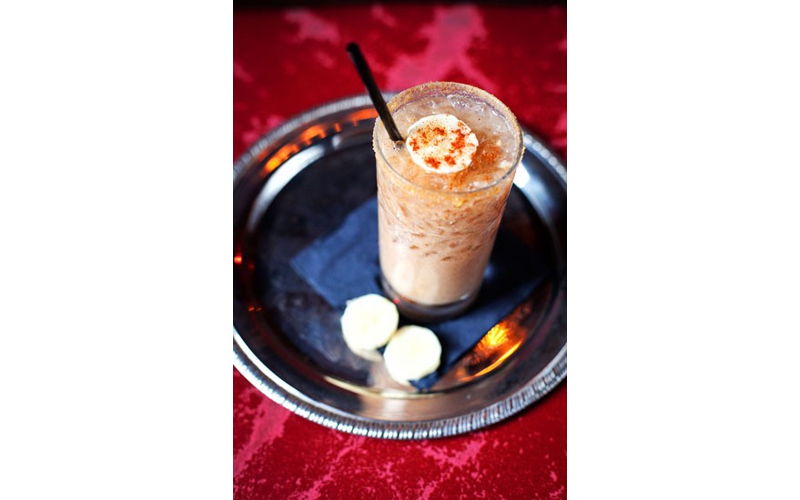 Fire in the Highball Glass

Once upon a time, the notion of fire and cocktails was relegated to the novelty of Flaming Dr. Pepper shots and jiggers of blazing Sambuca — the kind of drinks that, with one misstep, might require a visit from the fire department or a trip to the emergency room.

Nowadays, as local bartenders delve further into the world of handcrafted cocktails, their ice-cold beverages are starting to take on elements from the world of fire. It’s a beautiful marriage of hot and cold.

At the Gin Joint, owner Joe Raya and his crew regularly add a touch of smoke to their cocktails. The Flowers and Ashes is a complex blend of smoky peat and spring flowers that mixes a single malt Scotch like Laphroaig with gin, St. Germain, and lime. They also make their own “smoked maple syrup,” smoking grade B maple syrup (the dark, richly flavored kind) on a stovetop over bourbon barrel chips. The syrup adds a subtle touch to the Smoked Maple Old Fashioned, with Wild Turkey 101 proof rye and black walnut bitters.

If you trust your bartender (and, at the Gin Joint, you always should), opt for the “Bartender’s Choice,” in which you pick two elements from its list of flavors and let the bartender determine the actual ingredients. On a recent visit, I picked “smoke” and “spice,” and the result was a fired-up version of the White Elephant that substituted unaged mezcal blanco for the traditional tequila and added a dose of habañero along with grapefruit, lime juice, and Luxardo maraschino liqueur.

The habañero provides the heat, while mezcal blanco, which is made from the hearts of agave leaves that have been roasted over charcoal in an earthen pit, infuses the whole with a deep smokiness. The result is a cocktail with a sneaky burn — sort of a campfire in a glass.

Over at the Belmont, they’re taking advantage of mezcal’s smoke, too. The Bells of Jalisco, with reposado tequila and fresh lime juice, is the Belmont’s riff on a margarita. The secret is rinsing the glass with Sombra Agave de Oaxaca mezcal before the drink is constructed. That rinse imparts a splendid smokiness to the tangy and slightly frothy mix. The crowning touch is the “mean bean” garnish: a long cayenne-pickled green bean that stands upright in the glass and adds an extra touch of fire. A few munches on that mean bean while you sip the drink brings beads of sweat to your brow.

The Belmont also infuses honey with jalapeño, which makes a perfect fiery-but-sweet addition to cocktails. You can try it in the Brown Derby, where it adds a spicy zip to the bourbon and grapefruit blend that’s served over plenty of crushed ice.

If you’re an old school purist and demand that your fire cocktail actually be on fire, you can satisfy your urge for flame at West Ashley’s Voodoo Tiki Bar & Lounge. The tiki bar’s signature concoction, the Voodoo ($18), is a blend of light and dark rum, vodka, bourbon, and cherry brandy along with pineapple and orange juice. It’s served in a painted ceramic chalice adorned with hula girls. A small volcano cone in the middle is filled with alcohol and set aflame. This is no single-serving. The Voodoo comes with long neon-hued straws so a whole table can share and, hopefully, not singe their eyebrows off as they bask in the blue light of the volcano’s flame.

But, at most local bars today, the flame is implied rather than burning right there in front of you. At the Cocktail Club, Beverage Director Jasmine Beck has had great success with cocktails that get their heat from a deft blend of chilies and spices. Her team infuses their own liquors in-house, steeping habañeros in tequila and serrano peppers in gin. The Double Standard ($10) has been a hot enough seller to stay on the ever-rotating menu for more than a year, thanks to its spicy-cool combination of serrano-infused gin and cucumber vodka.

New for the summer is the Tropical Heat, a creamy rum concoction that muddles banana with paprika, chipotle, and cinnamon and gets even more spice from a simple syrup infused with cloves, cinnamon, and nutmeg. For a final touch, the rim of a tall glass is coated with dried banana, sugar, and ground chipotle.

The resulting drink is one of carefully choreographed flavors. “It all has to do with the way you put it together,” Beck explains. “The spice will be on the front side or the back side.” With the Tropical Heat, the fire is definitely on the back. It’s a creamy treat that starts out smooth and cool with a subtle heat emerging as you sip.

Perhaps the most creative blend of fire and ice is Beck’s Spring Phoenix ($10). She shakes together habañero-infused Blue Head tequila and Yellow Chartreuse with lime juice, arugula simple syrup, and a touch of lime bitters. This mixture is poured into a large glass rimmed with arugula- and lime-infused salt and topped off with a generous dose of Belgian beer. The coup de grace is the ice: a big square cube with a whole habañero pepper frozen in the middle.

At first it seems surprisingly light and refreshing, sort of a citrusy spritzer with a pleasantly spicy undertone. As the ice melts, though, the heat of the habañero seeps into the drink, which grows hotter and hotter as the minutes pass, leaving you at the end with a strong but happy glow of fire.

“I would like to make it even hotter,” says Beck, but she’s held back. “We have to keep things mild to make it more palatable.”

That restraint is key. Charleston’s new generation of fire-inspired drinks are not double-dog-dare thrill rides but mature cocktails that can be sipped and savored. The elements of fire — the smoke, the spice, the heat — merge with the more traditional sweet and tangy ingredients, enhancing rather than overwhelming them and adding intriguing new flavors to bartenders’ palettes. Even in the heat of summer, that opens a refreshing new array of options for adventurous cocktail fans.

From cubes to spheres, ice can make all the difference to a cocktail

Forging the Grates of Hell at Stars

For wood-fired pizza devotees, there’s no other way to make a pie