Midnight in Paris is an examination of nostalgia 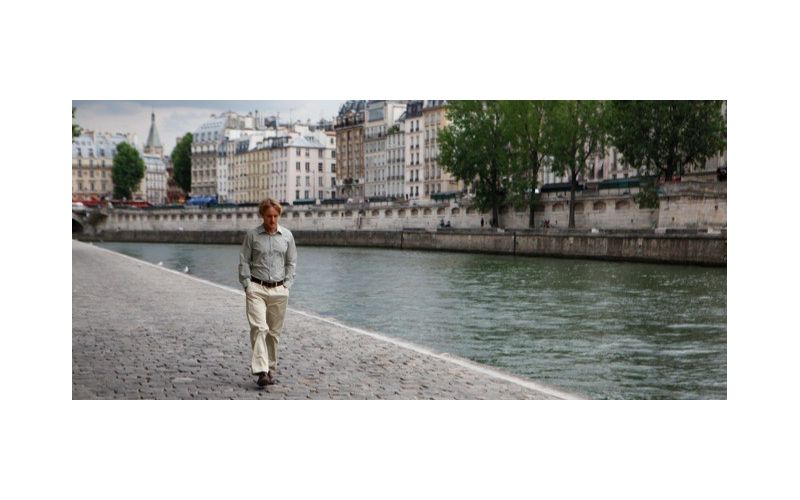 Woody Allen’s latest, Midnight in Paris, is an amusing fantasy with a slight but charming hook. Gil (Owen Wilson) is a frustrated American novelist who writes — and rewrites — film scripts for a living in Hollywood. He yearns for something deeper, more creatively satisfying, more romantic.

Vacationing in Paris with his fiancee Inez (Rachel McAdams) and her boorish wealthy parents John (Kurt Fuller) and Helen (Mimi Kennedy), Gil finds himself deeply smitten with the city, plotting a move to a bohemian atelier where he can devote himself to his novel. However, his shallow future wife will hear nothing of the sort. She’s already picked out a new home for them in Malibu and is hitting high-end Parisian antique shops with her equally obnoxious mother to furnish it.

Gil’s romantic longing to live the writer’s life in Paris plays out in an outrageous bit of time travel. One night while ambling through the streets of the city at the stroke of midnight, he is set upon by a group of flappers in a vintage touring car. They whisk him away to a party where F. Scott and Zelda Fitzgerald and Cole Porter are all in attendance. But at some point each night, the coach becomes a pumpkin again and Gil is back in the age of shopping sprees and fancy restaurants with a self-satisfied couple from back home, Paul (Michael Sheen) and Carol (Nina Adriana), who Inez and Gil run into in Paris. If Gil is an aspiring intellectual, Paul is a self-satisfied one, prone to epic verbal diarrhea on every subject from art to wine. If the buzz kill took human form, Paul would be it, a facetious bore who the otherwise intellectually stunted Inez for some reason adores.

Gil isn’t a particularly appealing character himself, beyond having to endure his harridan future wife and her repellent family. In his best moments, he whips out a spine, like when he calls his future father-in-law’s Tea Party pals "crypto-fascist airhead zombies," but for the most part he seems a little wimpy and naive. He’s prone to saying things like "I feel like the Parisians really get me," and other pronouncements that seem blithely delusional for a man of his age. Despite his soft, boyish features and lanky frame, Wilson is another one of Allen’s proxies. His superhuman neuroses and stream-of-conscious delivery make you feel like if you got a good look down Wilson’s throat, you’d find puppet master Woody Allen in his belly pulling the strings.

Allen is an expert name-dropper, and in Midnight in Paris, he is off the leash in that regard. His copious references to painters and writers are meant to give his middlebrow audience a glow of self-satisfaction at recognizing names like Luis Buñuel, Salvador Dali, T.S. Eliot, Henri Matisse, Gertrude Stein (a charming Kathy Bates), and Ernest Hemingway. One of Allen’s best caricatures, but a caricature nonetheless, Hemingway is presented as a humorless manly man prone to pronouncements like "Have you ever shot a charging lion?" and "You’re too self-effacing. You’re not manly," that recall the comically butch pilot played by Peter Graves in Airplane.

At times the film feels like a pseudo-intellectual thrill ride. Look, it’s Picasso! There goes Zelda Fitzgerald! Who’s the dwarf? Oh, it must be Toulouse-Lautrec! In the past Gil is embraced as a talent, one of the artistic community, even if the people doing the appreciating can sometimes come off as wax museum caricatures of famous people come to life. In the Paris of the ’20s, Gil also falls hard for an artist groupie, the dreamy and beautiful Adriana (Marion Cotillard), who is everything Inez is not.

The substance and soul of Midnight in Paris that lends heft and heart to its over-arching frothiness is Allen’s examination of wistful nostalgia as a seductive mirage that promises a past more romantic, creatively fulfilling, and aesthetically appealing than the present. With his love of vintage jazz and old movies, it’s hard to know if Allen is critiquing nostalgia or simply acknowledging its emotional pull. He certainly presents a present worth reviling, an age of angioplasty and fluffy hotel towels where valium has made life bearable if not exactly fulfilling and the idea of buying $20,000 chairs for a home in Malibu is acceptable to a crass upper-middle-class family with no deeper ambition than shopping and eating. The smug, loud Americans who love the sound of their own voices and find Paris "corny" are, in short, heathens. For Allen, they run counter to the almost impossible-to-believe truth that in 1920s Paris some of the greatest creative talent in history could all hang out in the same amber-lit apartments comparing notes. Midnight in Paris definitely makes it a past worth pining for.