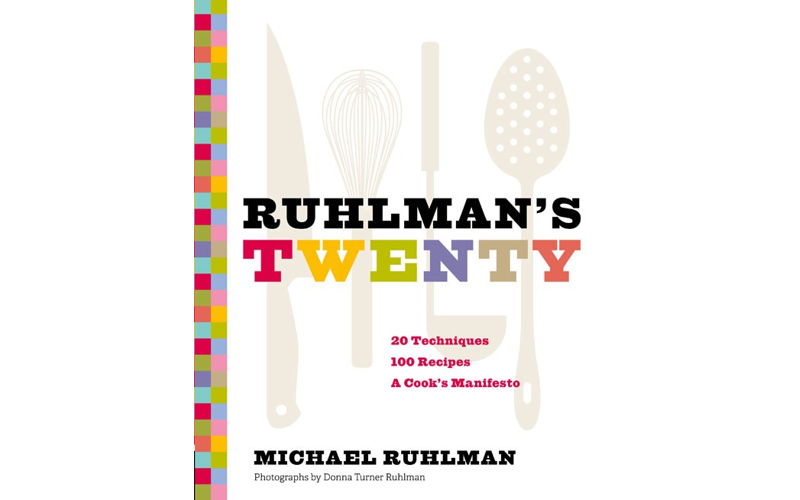 Is Michael Ruhlman more of a writer or more of a cook? Given his impressive body of work, it can be hard to tell. Call him a renaissance man.

As a nonfiction writer, Ruhlman has written books as varied as Walk on Water: Inside an Elite Pediatric Surgical Unit and Wooden Boats: In Pursuit of the Perfect Craft at an American Boatyard. As a food writer, he’s co-written books with Thomas Keller of the French Laundry, a book on charcuterie with chef Brian Polcyn, and a cookbook with Eric Ripert of Le Bernardin fame. As a cook, he’s written focused books like The Elements of Cooking, a reference-style guide to cooking, and the hit book Ratio: The Simple Codes Behind the Craft of Everyday Cooking.

Whatever you call Ruhlman, the word prolific doesn’t seem to do him justice.

His latest book is Ruhlman’s Twenty: 20 Techniques, 100 Recipes, A Cook’s Manifesto, and it’s the kind of work that makes a much, much less accomplished food writer envious. He’ll be in Charleston promoting the book next week. It’s probably his most comprehensive and ambitious book so far, organized as 20 chapters, each one an idea or technique that will make the reader a better cook.

“It’s a distillation of all that I’ve learned in my 16 years cooking and working with professional chefs, translating knowledge and fundamentals to the home cook,” Ruhlman told me by phone recently, speeding along in a cab in between book signings. “Home cooks rely too much on recipes,” he said. “With simpler rules, the home cook can be more flexible, more eager to cook, and life can be better all around.”

Ruhlman grew up in Cleveland, where he now lives with his wife — a photojournalist who shot the gorgeous photography for Ruhlman’s Twenty — and their two children. A literature graduate of Duke, Ruhlman’s foray into food began back when he proposed to the Culinary Institute of America that he cover the ins and outs of culinary school. They agreed, and he published The Making of a Chef: Mastering Heat at the Culinary Institute of America in 1997.

In 2007 Ruhlman’s style was solidified in The Elements of Cooking: Translating the Craft for Every Kitchen, where he demonstrated his affinity for simplifying classical culinary techniques and translating them for the home cook. Ratio: The Simple Codes Behind the Craft of Everyday Cooking took that desire for organization and simplification further. The idea behind Ratio is that there are several basic formulas (or ratios) for just about every kind of recipe, and that if you know those, you actually understand hundreds, if not thousands of variations. Ruhlman’s Twenty takes that idea still further, replete with beautiful photography and recipes as examples.

In an age where cooking seems to be as much a spectator sport as a hobby, Ruhlman’s laser-like ability to distill home cooking is refreshing.

“I think the reason cooking shows are so popular is because we stopped cooking and realized that we’re missing something about our humanity,” Ruhlman says. “The comforting smell of the meals, being around family and friends and the people we care about. People are longing to cook.”

You won’t get a lot of fluff if you grab a copy of Ruhlman’s Twenty. What you will get is an arsenal of basic cooking skills that you’ll remember and be able to access when you need to without necessarily following a recipe. It’ll make you a better cook.

Chapters in Ruhlman’s Twenty have names like “Think” (Chapter 1), “Sauté” (Chapter 14), and “Chill” (Chapter 20). Chapter 5, “Acid: The Power of Contrast” is all about using acidic ingredients like vinegar and lemon juice alongside often rich dishes to heighten flavor with contrast. “Lemon juice is one of the most valuable seasoning tools in the kitchen,” says Ruhlman. Vinegar is a close second. Ruhlman’s Sauteed Duck Breasts with Orange-Cranberry Gastrique illustrates that point. “This dish is also a reminder of how wonderful duck is and how little it seems to be used. This recipe is so simple and so delicious that it should be a staple in your repertoire,” he says.