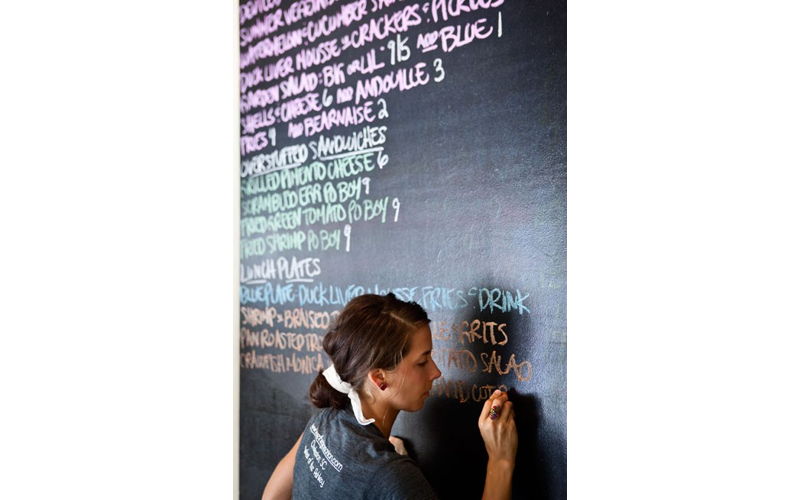 When it comes to a menu, form does not follow function. It follows philosophy. In fact, you can learn a lot about the culinary spirit of the times just by examining the physical format of restaurant menus.

For example, when I was fresh out of college and waiting tables at a seafood restaurant, one of the side-work chores we had to complete before heading home (or, more accurately, heading to the bar next door for rounds of Lemon Drops and Kamikazes) was to wipe down the menus with a damp rag, expunging sticky drink spills and splatters of cocktail sauce.

The pages were commercially printed, full color, on thick 8½-by-11 pieces of cardstock and slipped inside the plastic sleeves of a tri-fold holder. They were big, unwieldy things with a dozen pasta dishes, six cuts of steak, and a build-your-own combo section offering almost unlimited permutations of shrimp, scallops, and oysters plus 10 varieties of fish, any of which you could have fried, grilled, or blackened.

We changed out the pages only when a patron managed to dump enough melted butter or ketchup onto one to ooze up under the protective plastic. The selection of dishes never varied. You could get corn on the cob in February and steamed asparagus in October. The fish list was ironbound: flounder, grouper, salmon, swordfish, and those exotic specialties of the 1990s, mahi-mahi and the extravagantly unsustainable orange roughy. All arrived through the back door in corrugated paper boxes, pre-fileted and frozen hard as bricks.

We had a big carton of kale in the walk-in, too. It was used, along with wedges of lemon, solely to create garnishes for the plate. No one ever dreamed of eating the stuff.

Boy, how things have changed. Not only do we eat the kale, but the menus on which it appears are totally different now, too.

They’ve gotten a lot smaller, for starters. Most fit onto a single page. At the newer downtown restaurants, it’s rare to find more than eight entrées offered. The appetizers routinely outnumber the main courses.

There’s a philosophical shift behind this. At one time, when diners went out to eat, they could almost close their eyes and decide what they felt like ordering, then scan the half dozen pages of the menu to see how much it would cost.

I have an old Henry’s menu from the 1960s, and upon its eight densely-packed pages, alongside the “famous shore dinners” and Deviled Crab a la Henry’s, you can find everything from pork chops and fried chicken to shirred eggs and a cold beef sandwich (15¢). There are 11 preparations of oysters and 12 different styles of potatoes (including Lyonnaise and O’Brien).

These days, the power has shifted to the kitchen. You don’t mix and match from a list of a dozen side items: the plate is selected and composed for you in advance. Which is not to say that the kitchen wouldn’t make you a cold beef sandwich if you asked for one, but in this day and age who the heck would? The guys in the tight white coats and funny pants are the stars, and we put our meals in their hands. (Tellingly, one thing appears regularly on the menu these days that you would have never seen two decades ago: the name of the chef and increasingly, the names of the sous chefs, too.)

As they’ve gotten smaller, menus have also shifted to formats that make them easier to change. Gone are the commercially printed cardstock and big faux-leather covers. At many of our newer restaurants, a single sheet of unadorned paper is slipped down in front of you as you take your seat. Printed on heavy stock on the office laser printer, the menu can be changed by the chef as often as he or she sees fit.

At high-end joints, they try to give that single sheet a little more heft. At the Macintosh, it’s clamped onto a wooden clipboard, which offers diners more to hang on to but still emphasizes the ephemerality of the selection. At FIG, a single page is affixed with brass fasteners to a stiff black backing, and the day’s date is imprinted slightly askew across the top in red ink from one of those old-style rubber date stamps. At Two Boroughs Larder they lash their page to a lightweight board with two thick rubber bands, and they rubber-stamp the date on it, too.

This dynamism is enabled by technology, but the real driver is the nature of contemporary dining. Restaurants’ offerings change continuously based upon which fish was biting the day before and what fresh, seasonal vegetables found their way to the kitchen that morning.

Nothing highlights the ad-hoc, dynamic nature of a menu more than writing it by hand on an erasable board. Robert Stehling has long displayed his daily specials and a long list of ever-changing side dishes on blackboards high on Hominy Grill’s white beadboard walls, and Sal Parco made the roaming whiteboard of specials a fixture of his Mustard Seed restaurants.

Now, entire menus are starting to migrate onto the wall. The Glass Onion was an early player in this genre, its big board proclaiming the starting lineup in colored chalk right beside the counter where you order. At Butcher & Bee they erase and rewrite their entire blackboard between lunch and dinner. At the Lot, their wall board is augmented by small slates, which the servers bring right over and prop next to you on a little holder as they navigate you through your options.

We may tweet out pictures of paper menus and post them to Facebook, but in this era of omnipresent technology our menus have remained stubbornly low-tech. In 2010, Eater declared “iPad Sushi Menu Signals the Death of Printed Menus,” but despite their ability to deliver full color food photos and even serve as point-of-sale systems where diners can input their orders directly back to the kitchen, such newfangled ideas haven’t taken hold.

The pull, instead, is in the opposite direction. At SALT at Station 22, which re-opened earlier this year after a thorough makeover, the single page paper menu is printed in an old typewriter font, the section headings “SMALLS” and “MAINS” in all-caps instead of boldface, as if to suggest someone banged it out that afternoon on an old Underwood.

And here, I think, menu forms expose something else about our dining culture: a touch of disjointedness. In an era of rough-hewn style, we still want luxurious touches. Exposed brick and reclaimed wood are accented with sleek polished steel. Good, heavy paper and stylish art deco fonts are embellished with DIY rubber stamps.

Do we want to be stylish and elegant? Slick and sophisticated? Laid-back and rough around the edges? The answer is “yes” to all. We can’t quite make up our minds.

We’ve witnessed Schlitz listed side-by-side with artisanal saisons and $100 bottles of bubbly. Humble cheeseburgers are elevated to high art with custom blends of expensive beef and uptown pimento cheese. We use small-batch handmade tonic in our G&Ts then doctor our Negronis with Cheerwine.

It’s curious, in this era of hyper-focus on ingredients, that one of the old menu tropes of letting the food itself do the talking has remained a rarity.

When I was a kid, the fancy steakhouse in town had a guy who glided around the dining room with huge slabs of beef on a carving board, letting each diner inspect the wares and indicate how much they wanted him to slice off for their portions. Halls Chophouse does a pared-down version of this. Servers circulate with a large silver platter of slabs of beef in the cuts available. Seafood joints once positioned lobster tanks in the front of the room where you could go select the poor bugger that was going to end up on your plate. For all our modern passion about snout-to-tail eating and knowing where your food comes from, most diners today don’t want to get quite that intimately connected with their entrées.

And let’s pause for a moment to remember the dear departed dessert tray, that old up-selling shtick. Thrust a big tray brimming with representative slices of pies and cake right in diners’ faces, and ask not if they want dessert but which dessert they want.

Such devices belong to another time and place. Here in Charleston, they discreetly slip you a small card bearing descriptions of three or four sweets, perhaps with suggested pairings of single-barrel whiskey or 20-year-old tawny port, which you can sip in comfort even if you’re wearing jeans and flip-flops.

Looking ahead, it’s not so clear where our menus will go next. Some of the newer spots around town are bucking the trend. Rutledge Cab Co. launched with an old fashioned tri-fold, complete with plastic sheets bordered with brown faux leather. The Rarebit’s menu is laminated (laminated!), and there’s no way the highly stylized orange-and-yellow pages of the Home Team Kitchen at the Alley are being whipped out on a manager’s laptop. But these establishments are intentionally retro in style, and the very formats of their menus invoke a fuzzy blend of 20th century nostalgia.

Perhaps we’ll double down and carry the old lobster tank and dessert tray to their logical lardcore conclusions, with the food itself the only menu we need. Tanks of live fish, as fresh as they can get, shimmering in silver splendor in the dining room. Chicken coops outside the front door, sacks of dried peas in the entryway.

It’s a bit hard to read those tea leaves, and I think it’s because we’re currently in a bit of a lull. We’ve just ridden out a set of remarkable culinary waves that first broke when Husk opened its doors at the end of 2010 and rolled steadily across the Peninsula straight up to the launching of the Ordinary last December. Now, it seems, we’re biding our time, recharging our batteries, and getting poised to strike out in a new direction.

If you want a hint of what that direction will be, just keep an eye on the physical forms of the menus themselves. They provide a valuable compass.