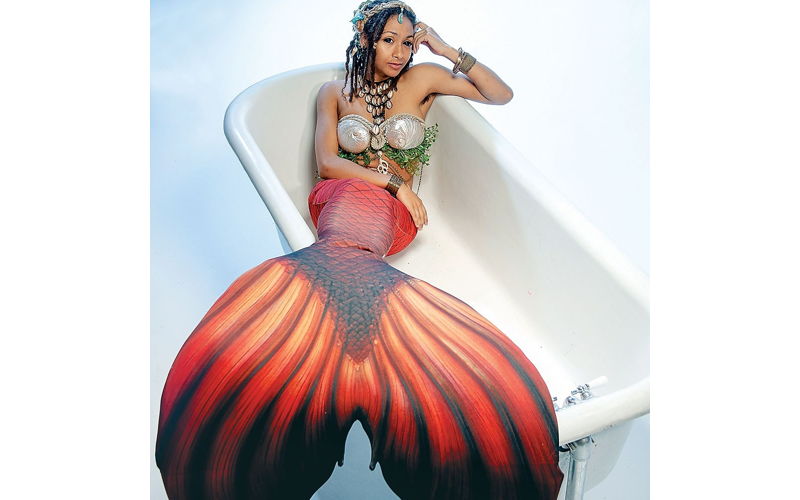 In crafting his fictional kingdom under the sea, Hans Christian Andersen paints an idyllic world beneath the waves where everything is tinged in blue, and “You could almost believe that you were suspended in mid-air and had the blue sky above and below you.” Of course, those who inhabit this world of Andersen’s “The Little Mermaid” were born with the same physical attributes of his quiet and thoughtful title character: “just like everyone else down there, she had no feet; her body ended in a fishtail.”

Jessie Sommers spent her childhood along the coast of South Carolina. There she developed that special kinship with the sea that one gains from growing up in the Lowcountry, where what is dry land and what is water is ill-defined and ever-shifting. Sommers’ affinity for the water and love of fantasy novels served to fuel her eventual decision to pull on a fin and try mermaiding. All she needed was a final spark.

“Mermaids have always been something that interested me. When I was in middle school I stumbled upon some YouTube videos of people wearing tails made out of fabric or silicone or neoprene or whatever and swimming around with them,” Sommers recalls. “I thought about it for not very long and decided if I live in a world where it’s possible to essentially become a mermaid, it’s better to do that than to live your whole life knowing it exists and not doing it.”

Sommers purchased her first set of fins around six years ago, when she began practicing her dolphin kick underwater. A year or so later, she tried her hand at crafting her own tail. She’s made three tails in total, although two have been retired. The spandex tail is easy to get on and off, and relatively easy to swim in compared to others.

But mermaiding is about more than just a fin. It requires being able to look natural underwater, to move about as if you’ve never stepped foot on land.

“When you’re a mermaid, being able to hold your breath for long periods of time is pretty essential to being able to capture, in my opinion, that more realistic side of it. Because a mermaid would not have to come up every minute and a half for air, like I do,” says Sommers. “I did take free-diving lessons a few years back, and that definitely helped. My breath-holds are nowhere near where I’d like them to be, but that’s definitely been one of the learning curves.”

Sommers has taken her fins to almost every public pool she knows of in Charleston and North Charleston. Every time, she says she’s welcomed and accepted. People ask for pictures. She gladly obliges. They ask if she’s a professional mermaid, like the Weeki Wachee Mermaids that frequent the Charleston Aquarium. She’s not. Sommers is just one of your local practicing mermaids, thankful to have a place to swim.

“There is a growing community of merfolk. Men, women, non-binary, they’re every size, every shape, every skin color. It’s a very diverse community and there is really something in it for everyone,” says Sommers. “There’s different kinds of tails and different objectives. Some people do it as a professional job, performing. Some people, like me, just do it for fun to feel free.”

Over the years, Sommers has learned that when you’re in a mermaid tail, people aren’t focused on the shape of your body or any other characteristics that may make you self-conscious around the pool. Instead, they’re focused on the fact that you’re a mythological creature at their local YMCA.

Sommers advises everyone who might be interested in mermaiding to do their research, study up on what tails might best suit them. Remember, as with any activity in the water, safety is vital. In this case, failure to act safely reflects poorly not just on yourself, but the mer-community as a whole. And it’s that community that could prove so important.

“There are some people in the community, especially a lot of younger people and men, that are nervous about being a mermaid or letting their family know ‘This is what I want to do. I want to wear a tail and go swimming,'” says Sommers.

Sommers recalls feeling the same jitters when she first started. She was all by herself with her tail. She was afraid of being met with laughter. That’s all gone now.

“I think this kind of thing will show you whose opinions are really important,” she says. “If somebody’s going to make fun of you or treat you badly or say rude things because you’re doing something that makes you happy and something that you love, then they can’t really care about you all too much.”

Our 2018 Summer Guide is Flippin’ Good