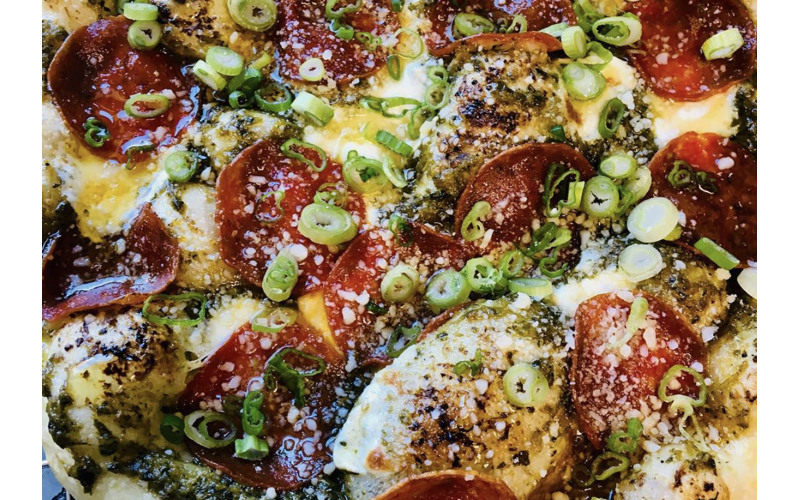 The Pies Have It

Since the departure of Slice Co. last spring, there has been an notable pizza box-sized void at Workshop, the fancy food court at Charleston’s Pacific Box & Crate complex. Slice Co. was one of the first concepts to emerge with a big enough following to warrant a stand-alone space — they now spin pies in West Ashley on Savannah Highway. Zach Kartchner hopes his concept, Wolf Peach Pizza, can be next, and the chef is bringing his fine dining experience to Workshop with his artisan pizzas and Lowcountry-themed salads. Even the name, Wolf Peach, which comes from the scientific name for tomato in Latin, hints that Kartchner’s approach is going to be different than the straightforward Slice Co.

Kartchner’s love of inventive dishes began early — growing up in Africa, Kartchner had to deal with ingredient constraints which spurred an innovative approach in the kitchen. The chef would go on to gain restaurant experience in Williamsburg, Va. and Savannah, Ga., working at spots like Sugo Rossa, which was operated by the same folks who managed modern Savannah eatery Cotton & Rye.

Earlier this year, Kartchner responded to a vague Craigslist post looking for someone who was passionate about pizza, and he later met with Workshop owner Michael Shemtov, who explained their need for an option providing pies along with a healthy element that would appeal to the numerous employees who work in the Pacific Box & Crate development. With this in mind, Kartchner created a menu with pizza and salads utilizing the bounty of produce available in the Lowcountry. Wolf Peach is now open at Workshop at the walk-up window next to Sushi-Wa Izakaya.

The Wolf Peach 10-inch pizzas — priced between $10 and $12 — are rooted in the Neapolitan style, but the use of a coarser double zero flour sets the dough apart. With a high hydration content, the pizza can be stretched a little thinner while still maintaining its structure in the high heat oven, which gets up to 900 degrees. Toppings depend on seasonal availability thanks to Kartchner’s environmentally conscious approach and belief that local just tastes better.

Right now, the pies come in classic flavors like mozzarella and a basil-topped margherita, but Kartchner hopes to continually refine the offerings as patrons become more comfortable with Wolf Peach. “The thought is that we don’t want to be constrained by tradition,” says Kartchner. “If it tastes good together, and you can put it on a pizza, then why not? The key is flavor.”

The salads also include local produce thanks to a partnership with GrowFood Carolina that gives Kartchner access to smaller farms that could be difficult to seek out. Beverage offerings also have a local focus with plans to constantly feature Charleston area breweries. Right now, Wolf Peach is offering Coast’s Goon Juice, a refreshing summer beer made with ginger and honey, as well as Cannonborough Beverage Company’s Grapefruit Elderflower Soda.

Wolf Peach Pizza is about as small as a small business gets, with Kartchner doing everything himself from morning prep to taking orders to rotating the pies in and out of the wood-fired oven. The pizza takes two minutes to stretch and another three to cook, and Kartchner says he’s been able to manage the busy periods well thus far. The chef is quick to credit the Workshop model, which allows individuals to test out inventive ideas at a low startup cost. In addition, the automatic audience of employees within the  Box & Crate development enables Workshop tenants to figure out if their concept could survive as a brick and mortar. Says Kartchner, “it’s not like anything I’ve ever seen before in the industry, and it’s really cool to be a part of it.”

Kartchner would eventually like to have his own shop, but he’s not itching to get out of what is proving to be a good thing at the Workshop. He’s hoping to pay it forward and eventually allow another concept to use the space that has helped him express his vision. One pizza to keep an eye on right now is the Savage Garden, which was made with the goal of featuring strong, balanced flavors. A charred scallion pesto is topped with slightly bitter local arugula that’s balanced out by the sweetness from a drizzle of honey. Salty pepperoni and house-smoked mozzarella round out a pizza that in many ways defines what to expect from Wolf Peach.