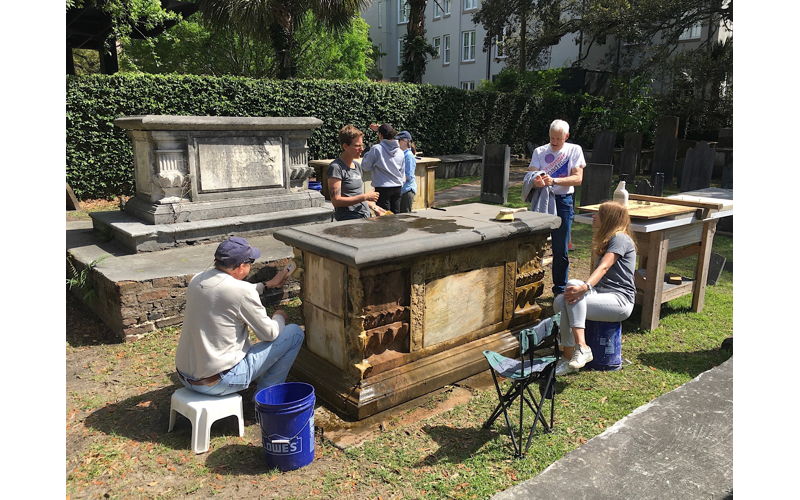 Throughout Christendom there’s a historic tradition that takes place every year during Lent called the Day of Renewal. The goal for participating congregations is to find common ground in a collaborative activity. This year, Charleston’s Circular Congregational Church decided to revive this tradition, and they asked a local conservator for help.

On Sat. April 20, congregation members gathered just before Easter to help maintain a critical component of the church’s heritage: its graveyard.

Led by cathedral trained mason, stone carver, and conservator Simeon A. Warren, members of Circular Church cleaned their graveyard’s gravestones, some dating to before the Revolutionary War. Even with the oldest memorials, the work is pretty simple, requiring just a bit of effort, a soft brush, and D/2 biological solution.

“We’re trying to stabilize what we’ve got and get the church engaged,” says Warren. “We want them to take ownership.”

Photos documenting Circular’s Lent Day of Renewal show congregation members smiling, holding brushes, scrubbing the gravestones of former parishioners, giving back to the community with their time and elbow grease. The job isn’t difficult, but getting the word out about how and when to maintain church graveyards can be hard.

Warren worries — if we don’t take ownership of the monuments and memorials that we can restore and save right now, who will? If we don’t share this knowledge with others, how can we rebuild when disaster strikes?

Last month, standing in Circular’s graveyard the day after fire tore through Paris’ iconic Notre Dame cathedral, Warren couldn’t help but connect the work he’s doing with gravestones (he calls them monuments, speaking generally) in Charleston and the work that will need to be done to rebuild Notre Dame.

“After Hurricane Hugo here, a small group of Charlestonians made a decision,” says Warren. “They asked, ‘What are we going to do if this happens again? We need to train people.'”

The result of that commitment was the 2004 creation of the American College of the Building Arts, a Charleston-based private liberal arts college that offers formal training in seven craft specializations: carpentry, stone, classical architecture, forged ironwork, masonry, plasterwork, and timber framing.

Hurricanes, flooding, the damaging effects of human hands. These obstacles can be met and dealt with by talented, trained craftspeople.

“I think the same is true of what’s happening in France right now,” says Warren. “You have to plan not for this moment, but for 20 years from now. If you can train enough people now, then in 20 years time you’ve got a new system back in place.”

Warren points to two students who are part of the promise of that new system, Jonathan Hollins and Roland Long. As seniors at the American College of the Building Arts, Hollins and Long will soon graduate and take their skills into the world. Now, though, they work diligently on a large monument, mixing lime, scrubbing stone, building stronger brick foundations.

“I’m teaching students how to restore on a bigger level. And I’m engaging the church so they can become a part of saving these monuments,” says Warren.

Head of the traditional masonry program at the college, Warren first joined ACBA back in 2006. “We’ve come a long way,” laughs Warren, noting that when the school was formerly located in the Old City Jail, he was mainly in charge of sweeping bird poop off the floor.

Now, in ACBA’s new home on Meeting Street, Warren says that the student population, and the college, are growing and developing. “We’ve graduated almost 100 students — there are 100 students out there doing work. All students that want to work are getting work right now,” says Warren of ACBA’s graduates.

In his four ACBA semesters working with Circular Church, Warren and his students have cleaned, preserved, and rebuilt 15 monuments. At first glance some stones merely look nice, gleaming white in contrast to the weathered gray of un-cleaned monuments.

But more than just a good spiffing up, Warren says that a lot of the monument work is simply for safety reasons: “I could touch it and rock it backwards. A kid could pull it over.” Walking around Circular’s graveyard, Warren points to several compromised monuments which could eventually fall, crack, and possibly hurt someone.

Around us, children and their parents walk through the graveyard, enjoying a spring day in Charleston. Warren wants these families to get a good idea of the church’s and the city’s history by taking in well-maintained gravestones — the kinds that hold the history of families that have been here for generations.

The work Warren and his students do isn’t an easy, quick fix. It is important, though. So important that it earned Warren an Elizabeth O’Neill Verner Governor’s Award for the Arts earlier this year, an award that recognizes “outstanding achievement and contributions to the arts in South Carolina.” This is the kind of work that often goes unseen, work that can be tedious and time-consuming. It could even be considered boring, if you ignored the irreplaceable history these guys are preserving. The process starts with the basics: rebuilding a monument’s foundation, stabilizing it so future generations can learn more about their past — and not descend into a muddy pit while at it.

The monument that Warren, Hollins, and Long are currently working on is made with pre-Revolutionary Portland limestone — the same stone used to build London’s St. Paul’s Cathedral. Earlier this semester they worked on putting a foundation between this monument and the one next to it to prevent water from getting trapped between the two. Warren jokes that if the monuments start sinking, at least they’ll go down together.

But, back to that Portland limestone: “It’s the stone everybody wanted,” says Warren. “All these Charleston folks were importing it because they wanted to show how important they were.”

Thanks to a grant from the State Historic Preservation Office (SHPO), ACBA can still source this same stone hundreds of years later, maintaining the integrity of the original monument.

That SHPO grant will also help fund an upcoming Gravestone Preservation Workshop, held May 22-25 at Circular Church. The workshop is open to everyone, but the goal is to bring in attendees affiliated with local churches who are willing to do the work at their own places of worship.

And this knowledge isn’t just limited to workshops — Warren wants to spread gravestone conservation far and wide. He recently met with the owner of Bulldog Tours, John Laverne, to walk through Magnolia Cemetery, where the company has started holding tours. Magnolia is massive — home to 35,000 permanent residents — but Warren knows that preserving even one monument can make a big difference in the general preservation of Charleston history.

“You have to take that knowledge elsewhere,” says Warren. “There’s no whole church group that brings the churches together. Maybe in doing this we can start to make some community around the churchyards.”

In working at Circular, Warren has found his own sort of community — common ground with Charlestonians that he, as a British man, didn’t think he’d find. You see, that Portland limestone is the stone that Warren was trained on when he first started out as a “stone cobbler.”

“I can walk into a graveyard and find my own history, in terms of the Portland limestone,” says Warren.