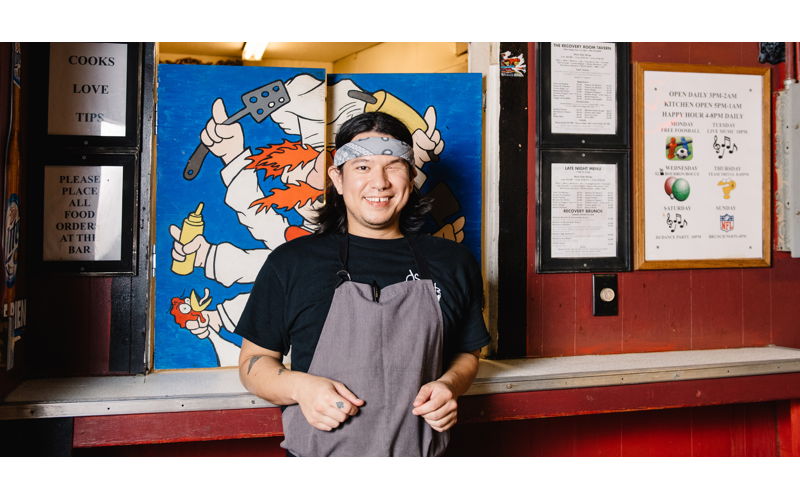 John Browder fell in love with the dishes his older siblings brought from the Philippines when they moved to Charleston in 1997, leading the experienced chef to eventually start Kuya, a pop-up serving Filipino favorites.

The Charleston-born chef’s lineage runs deep in the Philippines, where his older brother and sister were raised by his aunt while his mother was in the process of becoming a U.S. citizen. Green card in hand, Browder’s mom brought his older siblings to Charleston where they met their little brother John for the first time.

Browder was thrilled to be reunited, and he couldn’t get enough of the food they brought with them. “They had a bag of these pre-made siopaos (steam buns filled with braised pork), and I was just blown away when we heated them up,” he said.

He’d always helped his mom in the kitchen as a child, but Browder said he found himself cooking even more once his brother and sister arrived in Charleston.

“My older brother Jo would take me to Filipino parties with his friends, and those showed me a vast array of Filipino food,” he said. “My sister was the first one I collaborated with on recipes.”

Browder eventually sought out a restaurant job, but with few Filipino establishments in Charleston, he began his career at Bushido in West Ashley. Starting at the hibachi grill and tempura station, Browder transitioned to the sushi bar, where he stayed for six years.

A turning point came when chef Sean Brock, a Bushido regular, sat down at his counter for lunch. Browder remembers his order: “Twenty-eight pieces of nigiri and a Budweiser.”

Chef to chef, Browder told Brock he was at a crossroads, unsure if he should attend culinary school or learn on the job. When Browder said French cuisine frightened him the most, Brock advised him to get a job at a French restaurant in lieu of culinary school.

Browder left Bushido shortly after for Early Bird Diner — a slight deviation from Brock’s guidance. But the parallels between Southern and French cuisine taught him some basics. He eventually found his way to French restaurant Chez Nous before spending time at the likes of Peninsula Grill, Obstinate Daughter, McCrady’s and Lana.

While working as the sous chef at Lana in 2015, Browder started doing Filipino pop-ups at R. Kitchen next door, calling his concept Kuya —  “the most respectful way the Islanders say big brother” in the Philippines, he said.

The pop-ups were a hit. “I had such a great time and everyone that came was very receptive,” he said. “I even got the younger Filipino crowd in, which is exactly what I wanted.”

After a brief hiatus in Portland, Maine, Browder returned to Charleston to help David Schuttenberg run the Kwei Fei pop-up at The Daily.

“[Schuttenberg] really inspired me to get where I am now,” Browder said. “I was at a crossroads when I moved back to Charleston, and I felt Kuya was the natural progression for me after watching Kwei Fei grow into what it is now.”

Kuya relaunched at Surf Bar on Folly Beach last summer. Recently, it has popped up at Paddock & Whiskey, The Recovery Room and Micho (find him Sept. 11-13).

Browder’s time at Chez Nous taught him the importance of classic recipes. You’ll find Filipino favorites like lumpia and pork adobo on Browder’s menu, but he uses pancit, a Filipino noodle dish, as a blank canvas for experimentation.

His take on sisig also sells out often, Browder said.

“I take an entire pig’s head, break it down, boil the ears, boil the snout, chop them up super fine and get them nice and crispy in the pan,” he said. “Then, I throw in the rest of the pig’s head and the jowl meat and cook it down in onions and garlic. Then I drop an egg yolk on it right before it hits the table.”

A refined, authentic approach to the cuisine even caught the eye of Nikko Cagalanan, another local Filipino chef who runs Mansueta’s. “John’s food is really good, and his take on Filipino food is on point,” Cagalanan said. “I’ve been to his pop-up multiple times now, and I couldn’t be happier to see another chef doing Filipino food in Charleston.”