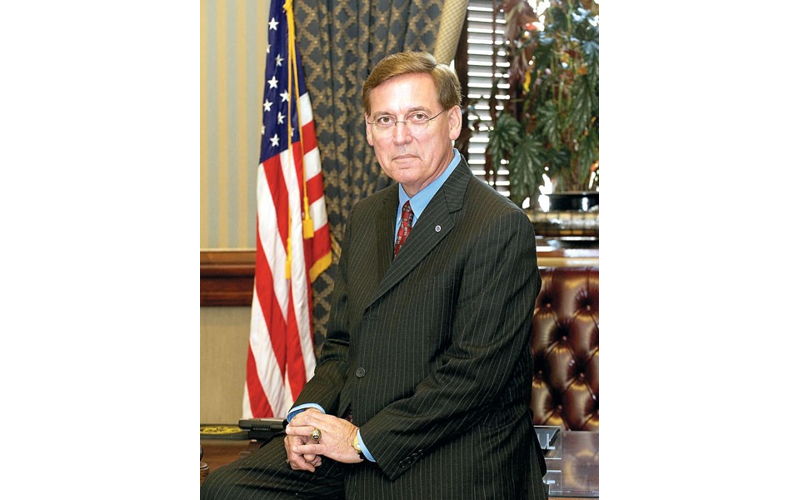 And then there were four... er, three.

Of the three remaining candidates for CofC president, Martha D. Saunders brings the most experience in the world of — you know — education.

Sure, Encarnation taught at Harvard and spent a lot of time in school, but he spent most of his career as an international business consultant. And McConnell? Well, he could probably school you in politics, but that’s about it for academic experience.

Saunders has already been a college president twice, first at the University of Wisconsin-Whitewater (2005-2007) and then at her alma mater, the University of Southern Mississippi (2007-2012). She has also served as a provost at two different schools, Columbus State University (2002-2005) and the University of West Florida (2013-present), and she has served on the Commission on Colleges, the accrediting arm of the Southern Association of Colleges and Schools.

Saunders also has quite a bit of teaching experience; she says she has taught more than 8,000 students in the course of her career.

“I would bring a great understanding of higher education,” Saunders says. “I would move very quickly. My learning curve would not be terribly steep.”

So, why the interest in the College of Charleston? Saunders says the school’s reputation precedes it, and she wants to build on its strengths. “The college has a very good brand that people all over the country know it, so I think we could maximize that and bring in even more students,” Saunders says. Specifically, she says she would expand graduate programs and look into “alternate methods of delivery,” including hybrid classes that combine online and in-person instruction.

When asked about the most pressing issue on campus right now, the potential merger with the Medical University of South Carolina, Saunders says she needs more information to decide where she stands.

“I’ve been reading about it, and I don’t have a lot of details. I would be very interested in reading the business plan for that,” Saunders says. “It certainly is one of those opportunities that could be used to great advantage. I just don’t have enough information to make a lot of comment about it … It’s not a simple, short answer.”

Saunders says she has seen good and bad mergers, and she praises the recent merger between Georgia Health Sciences University and Augusta State University. “I think they took some time with it, but by all reports it turned out to be a very satisfactory merger,” Saunders says.

Some faculty members have worried that, at its core, a merger with MUSC represents a turning away from the college’s liberal arts tradition. Saunders says she doesn’t see it that way. “I think you can do both. I think you can retain what is rock solid — and that is a high-quality liberal arts education, which is what more studies show us is what matters in the workplace — but also truly tie research to economic development for the region. I don’t think it has to be one or the other,” Saunders says. —Paul Bowers

Jody Encarnation was the first member of his family to go to college. You could say he never left. A College of Charleston alumni and Lowcountry native, he went on to earn three master’s degrees from Duke, became a Fullbright scholar who went to India for his doctoral thesis, taught at Stanford, and spent a quarter century on the faculty of Harvard’s business and government schools.

Though he lives in Boston, Encarnation hits up the Holy City at least once a month where he’s on the College of Charleston’s foundation board, does business consulting, and works on projects for big companies such as Boeing.

“In coming back and being more deeply engaged in the college, I appreciate its many strengths and its unrealized potential,” he says. One piece of unrealized potential he’s been most interested in is how the college engages with the rest of the state and Lowcountry when it comes to economic development. “It’s here that I think the college can play a major role in the ongoing transformation of the Lowcountry and the state,” he says. “Boeing is one piece of the much larger process of transformation that my hometown is going through.”

In that regard, Encarnation resists the word “merger” when talking about a proposal to combine CofC with MUSC. In his consulting business he deals a lot with mergers and acquisitions. “The language of ‘merger,’ even in the corporate environment can often be interpreted negatively,” he says. Instead, he’d prefer to talk about the matter in terms of a collaboration, and he thinks South Carolina should do more of that with its schools. “It’s in that context that I think a much wider and deeper collaboration between MUSC and the college is definitely called for,'” he says. But he stresses that the heart and soul of CofC as a liberal arts college is not threatened by such changes.

The Inside Man
Glenn McConnell

Glenn McConnell is known affectionately around the Statehouse as “the wizard.” He was once the most powerful politician in South Carolina as president pro tempore of the Senate, but now he’s in the largely ceremonial position of lieutenant governor, and his power over state government has diminished. But he’s still seen as a master politician. If he wins the CofC presidency, his legacy in that regard will only grow.

McConnell frames the college as the launchpad of his career and his life. He was student body president of CofC, and he describes the school as the place where he learned how to think. “I have the opportunity to return and to help the College of Charleston in what I consider to be its most challenging times,” he says. “And that is how to continue to be relevant and at the same time maintain its identity as a liberal arts college.”

While he doesn’t have an academic background, he’s equipped to be its leader, he says, because of his understanding of the state’s culture and government. That’s why people approached him to run for the post. He knows all the players, what levers to pull, buttons to push, and knobs to turn. Maybe even which arms to twist. His pitch: he’s the insider’s insider who could tweak state law to the college’s favor whatever comes up.

“The college is in a challenging period. The merger talk is not going to go away,” McConnell says. “The business community and government leaders have contended that we’re going to have a research university. Well, if that issue is going to be handled, I believe I have the appropriate skill set … I know my way around state government and all the leaders.”

In McConnell’s mind, a merger or collaboration is an unstoppable train coming down the tracks and he knows the spell that’ll stop it.

His plan is to change existing laws in a way “that will give the college the tools to be able to set up a targeted research university inside of the University of Charleston, particularly in the graduate areas,” he says, adding that such a measure would give CofC the opportunity to have a strong liberal arts core while meeting the research demands business leaders have for the Charleston area. “Then, if it [CofC] has to sit down at a table with MUSC, it sits down with a stronger hand of cards in any negotiation … and then if they order a merger, the college won’t get swallowed up.”

Asked what he thought about the political intrigue surrounding the race, opposition from the local NAACP to his bid, and his close association with people on the Board of Trustees, McConnell said, “There’s always going to be a diversity of opinion with anything.” About the NAACP specifically, he says his record of inclusiveness in the General Assembly speaks for itself. “As head of the S.C. Senate pro tem, I think you’ll find Democrat, Republican, liberal, conservative, black, and white will tell you … as a leader I was fair, dealt honestly with people, and was inclusive. And I’ve got African Americans who support me. People are entitled to have a different opinion.” —Corey Hutchins

(The One Who Got Away)
Andrew Card

At the beginning of last week, the college’s Board of Trustees announced that five finalists had been chosen for the post of Top Cougar. One of the finalists pulled out before his or her name was even announced, and another, Texas A&M employee Andrew Card, withdrew the following day.

While it’s unclear exactly why Card dropped out of the running, we do know he had a few political liabilities that might have made him unpopular on the left-leaning College of Charleston campus. Card served as White House chief of staff during George W. Bush’s administration, where Dubya apparently gave him the nickname Tangent Man, according to a New York magazine report. During that time, Card gained notoriety for saying of the Iraq War rollout plan, “From a marketing point of view, you don’t introduce new products in August.” Google Card’s name, and you’ll also find a sinister-looking photo of him on warcriminalswatch.org next to a charge of “crime against peace.”

Also, in 2011, Card joined the board of directors of Lorillard Inc., the third-largest cigarette manufacturer in the U.S.

“It is not uncommon for candidates to stand down from consideration in a presidential search, and we thank Mr. Card for his interest,” Board of Trustees Chair Greg Padgett said in a prepared statement.

Card is a graduate of the University of South Carolina, and he currently serves as executive director in the Office of the Provost at Texas A&M University. —Paul Bowers