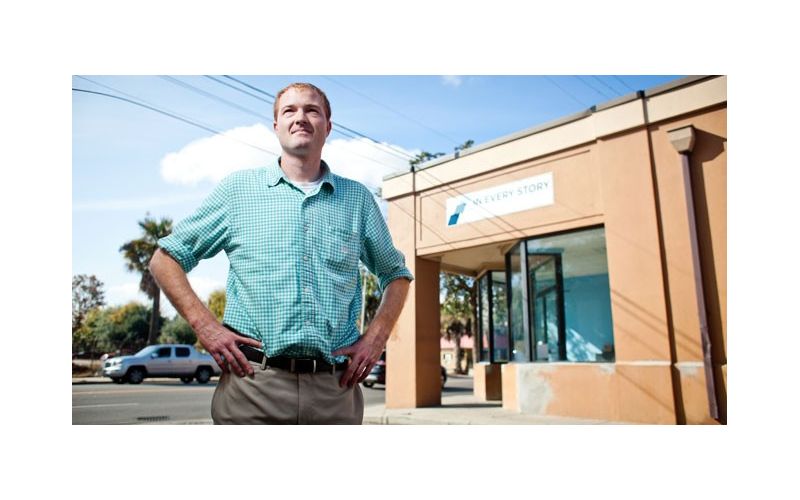 It’s a quiet life in Derek Snook’s Eastside home, a low-rent studio apartment recently renovated by the Star Gospel Mission as transitional housing. There’s an acoustic guitar in the corner, an American flag on the wall, a modest stack of books on the nightstand, and not much else.

As a Furman-educated president of a labor services agency, Snook doesn’t fit the usual profile of men who stay in the transitional housing — but then, as Snook will attest, surprises abound in the world of the homeless and down-and-out.

Since Oct. 1, Snook has been living on a wage of $8 an hour to learn more about the conditions of people who work for his company, In Every Story Labor Services. He’s getting around town on CARTA buses, skipping out on most luxuries, and living on a shoestring budget.

He admits it’s not a perfect experiment, but he’s learned a few lessons from the new lifestyle — some eye-opening, some mundane. Snook says, “People spend so much time trying to start programs to help the poor, and the reality is that probably one of the best programs we could start would be a bus system that runs on time.”

Snook is a rare breed of idealist, combining an even-keeled pragmatism with a blue-sky belief in a coming Kingdom of Heaven. His company is not radically different from the host of other day-labor agencies around Charleston, which provide temporary workers to clients looking for help with jobs like demolition, construction, and cleanup. Started in the fall of 2010, IES has three main distinctions:

2. Workers are paid on a weekly basis instead of a daily basis. Snook says the daily-pay arrangement attracts vulnerable workers who are looking for a quick fix and tend to blow all their money in a night.

3. Unskilled workers make a base pay of $8 an hour, instead of the minimum wage of $7.25. Snook is saving up profits in an account called the Hope Fund, which he plans to use on raises for workers who show up reliably and continue to pass drug tests. The ultimate goal is to pay many unskilled workers $9.74 an hour, which a recent MIT study determined to be a living wage for Charleston County residents.

Socially conscious labor-service agencies aren’t a new idea. According to Janet Van Liere, member services coordinator for a group of like-minded companies called the Alternative Staffing Alliance, the trend started in the ’70s with a Chicago company called Just Jobs that was founded in response to abuses of entry-level workers in the temp-labor industry. Van Liere says that while other agencies were cutting corners on workman’s compensation and nickel-and-diming workers by charging them for things like use of tools, Just Jobs sought to reform the industry from the inside. Today, the Alternative Staffing Alliance has close to 40 member organizations, both for-profit and nonprofit. Some offer full-time job placement services and job training; others, like IES, are more modest in their goals. “It’s market-driven, so people figure out where the market demand is and they tailor their staffing service to that,” Van Liere says.

One of IES’ first workers was a West Ashley man named Abu Rahman, who says he was having trouble finding full-time work because of a criminal record that includes drug charges, manslaughter, and forgery. At age 62, Rahman says he has left a life of crime behind, but the ghosts of his past still haunt him in job interviews. At IES, he’s been able to pick up specialized skills on jobs that include carpentry, cleaning, and demolition. Recently, he found temporary work painting lines on sports fields in city parks.

“They help those who want to try to help themselves,” Rahman says of IES.

He says he makes enough to get by, and some weeks there’s a little extra to go into savings. While he plans to move on to a full-time job eventually, he says he’ll still probably keep taking temp jobs for extra pay.

The $8-an-hour arrangement isn’t the first social experiment Derek Snook has undertaken. Ask him about the origins of his company, and he’ll end up telling you about his homeless year.

“It’s called In Every Story,” Snook says, winding up his business pitch. “So in every story there’s conflict, but there’s also examples of God’s love, hope, and redemption. For me, I just want to live the story that’s written for me. Thoreau says that most men live lives of quiet desperation, but if you pursue the life you dreamed of, you’ll find success in the most common of hours.”

In June 2009, a fresh-faced young Derek Snook checked himself into the Star Gospel Mission on Meeting Street, where a bunk goes for $90 a week. At the time, IES was a faint glimmer in his mind.

Matthew Crooks, a day manager and former resident at the mission, says he didn’t mind having a non-homeless person taking up a bed for a while. “We don’t judge. If people have a need and we can fill it, then that’s all that really matters to us, to be of service,” he says.

Snook ended up spending a year at Star Gospel Mission, where he learned the ins and outs of homeless life and the local day labor industry, working as a temp laborer during the days and bunking up at night. “My mother was surprisingly more upset that I wanted to work day labor than when I moved into the mission in the beginning,” Snook says.

He wasn’t the first middle-class white man to take an intentional homeless plunge in Charleston. In the 2008 book Scratch Beginnings, Merrimack College graduate Adam Shepard told the story of how he came to the Holy City with $25 and the clothes on his back, checked into Crisis Ministries, and worked his way up to a steady job and an apartment within 10 months. The book was written as a sort of test of the American Dream, and it came off to some critics as eye-opening, others as arrogant.

“His takeaway was, ‘If I can do this, anybody can do this,'” Snook says. “But my takeaway is I don’t understand everybody’s obstacles, and I realize I was fortunate enough to go to college and have a lot of what enabled me to pretty quickly figure something out.”

While staying at Star Gospel Mission, Snook says he had a homeless bunkmate named John who wanted to continue his education at Trident Technical College but was intimidated by the idea. “I would tell him, ‘John, you’re sharp’ — he read all these philosophy books — ‘there’s no reason why you can’t go back to school,'” Snook says.

Then one day, John turned the tables. Snook was daydreaming aloud about starting a day-labor service, and John told him to just do it. “He said, ‘You know, Derek, you’re clean-cut, you’re sharp, you’re a smart guy. Lots of people start businesses. There’s no reason why you can’t,'” Snook says.

After going on a fact-finding road trip to visit labor agencies around the country, Snook started IES in the fall of 2010 with $3,000 and a big question: “How can we use business to address social issues?” The company’s first gig was hiring workers to do trash pick-up for 11 days at the Coastal Carolina Fair, and Snook found workers by driving around town and talking to people on the street.

By March 2011, IES moved into a building on Meeting Street almost next door to the Star Gospel Mission. Today, Snook says the company uses about 60 workers a week, and he hopes to expand.

While Snook says it was the Christian Gospel that motivated him to open IES, he rarely feels the need to tell people it’s a Christian organization. “I mean, I can’t get past, ‘Why did you move into the Star Gospel Mission?’ without talking about my faith in some way. So in my humble opinion, we don’t need to plaster our faith on the walls,” he says.

He’s modest about the scope of his mission, too. Whereas similar labor agencies around the country are providing job-counseling services and other benefits for their workers, Snook says he’s focused on making steady improvements on the business and pay model.

“On a scale of 1 to 10, other places are a 2. We’re a 3,” Snook says. “We’re not going to pretend that we’re blowing it out of the water and turning homeless people into attorneys, but are we making a marginal difference? I think so, and I think that it’s noticeable. And it takes time. If we keep it up, we’ll see what God does.”