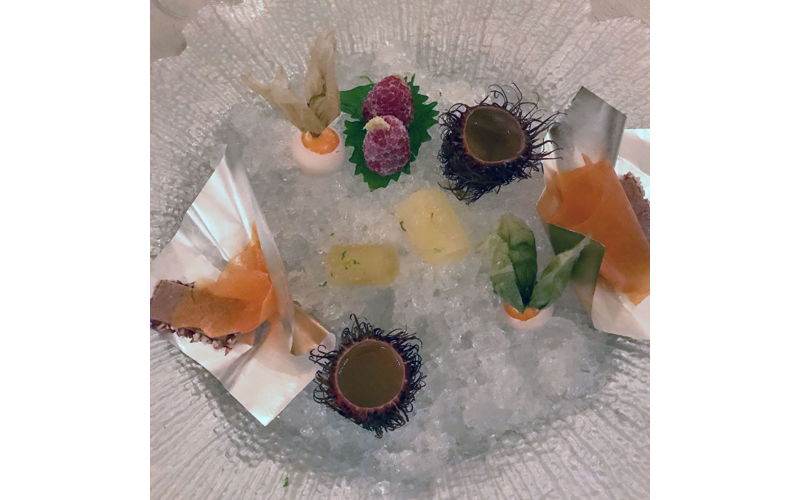 There’s a timelessness to McCrady’s. Flickering lanterns illuminate Unity Alley much as they did in 1778. Thick ground floor arches still open onto an interior courtyard (now bar) as they did in 1788. And the upstairs Long Room still hosts extravagant dinners fit for George Washington, who dined here on his 1791 Southern tour, describing the meal as “sumptuous” in his diary.

At Thursday’s Charleston Wine + Food “signature dinner” in McCrady’s Long Room, I found myself wishing I could yank General Washington from his 200-plus years of slumber, dust him off, hand him a new set of dentures, and watch his reaction as he savored eight elegant and whimsical courses served over the course of a three-hour seating (and if you counted the various canapés and desserts individually, you could argue it was a fifteen-course meal). I daresay he would have been delighted.

“Signature dinners” involve the collaboration of two chefs: one hosting, one visiting. In this case, recently promoted McCrady’s executive chef Jim Stein was paired with North Carolina’s chef Steven Devereaux Greene who helms Heron’s at the Umstead Hotel in Cary. For Greene, this was a homecoming of sorts — he once worked at McCrady’s under then-executive-chef Michael Kramer.

Both Stein and Greene know a thing or two about molecular gastronomy (to put it mildly), employing techniques we could never master at home. They hand-select the best of seasonal and regional ingredients, shoot them to the moon and back, and reconstitute the familiar into the extraordinary, as do their respective pastry chefs: McCrady’s Katy Keefe, and the Umstead’s Jonathan Fisher.

The evening started with what turned out to be an edible centerpiece at each table. We were directed to reach into mossy dioramas to scoop up little robin eggs which turned out to be pickled South Carolina quail eggs, dyed blue (though by candlelight they looked purple) by the natural coloring of butterfly pea blossoms. Each egg was piped full with “bacon mousse” made from smoked pork belly, nestled in a “nest” of savory mushroom-celery-infused kataifi (a delicate shredded phyllo dough). Then came diamond-shaped tarts filled with whipped ricotta and topped with brilliant orange trout roe from North Carolina, little Pop Rocks-like bursts of salty umami.

Candelabras and foliage surrounded us. Chef Stein and his sous chef Bryan O’Kelly helped adorn the Long Room with natural cuttings they foraged themselves on Folly Beach earlier in the week. Some of the foraged herbs ended up on the plate, including some that topped Stein’s snapper filet over puréed hominy (think masa), sprinkled with green powder from dehydrated bay leaves.

Of course, this being the Wine + Food fest, each dish was assigned a complementary wine. Frenchman Jean Trimbach stood up to introduce each pour on behalf of his family’s 13th generation vineyard Maison Trimbach, pausing to apologize with self-deprecating humor for his unfamiliarity with hominy and for his mispronunciation of soul (“sowl”). But he assured us emphatically that he knew what grits were!

Trimbach’s standout wine was a dry but silky Riesling grown on steep, terraced slopes in Alsace. The name of the wine, Geisberg, translated literally “hill of the goats,” a Grand Cru varietal which played beautifully against Greene’s signature “62-degree egg” dish, his play on shrimp and grits. Served in a dainty teacup, the egg jiggled like custard alongside shrimp and country ham, with white truffle shavings from a North Carolina grower, crowned with a crisp grit wafer (Greene’s version of corn chips) and edible gold leaf. Well-choreographed servers poured hot ibérico bone broth into our teacups. As if that weren’t impressive enough, Greene’s three-year-old son (along with the six-year-old daughter of his chef de cuisine) helped plant the heirloom John Hawk corn that formed the backbone of the grits themselves.

Perhaps the dish that elicited the most delight was Greene’s slow-poached tangerine flanked by kumquats, all filled with foie gras mousse and balanced on a crunchy bed of puffed grains: amaranth, sorghum, white poppy seed, and Carolina Gold rice. Somehow, Greene had extracted any bitterness out of the citrus, leaving the rind mild, sweet, and malleable. We spread forkfuls of the citrus-mousse over buttery poppyseed biscotti, as my dinner mates marveled at what they dubbed “space ice cream:” little dots of super-chilled crème fraîche infused with tonka bean (I had to look that one up; a unique spice with a sandalwood/birch flavor).

My apologies for not remembering which pastry chef was responsible for which dessert (we were all six wines in at that point, and quite happy), but I believe it was Fisher who fashioned makeshift “walnuts” out of sorbet in a truly avant-garde presentation. We tickled our noses on spiky passionfruit while knocking back shots of elixir. We marveled at tart “leather” (think Fruit Roll-Ups) made from jelly palm fruit, and we nibbled on would-be Butterfingers made with African runner peanuts.

Much of the plating took place within the original “stage” at the end of the Long Room within view of diners, making the evening as much performance as it was a shared experience. Above the stage, George Washington crossed the Delaware in a reproduction of the famous painting hanging at the Met. As I left, I ran my hands along 241-year-old bricks, marveling at how a restaurant can be so historic in structure yet so progressive in mission. I felt stuffed. And I felt grateful.