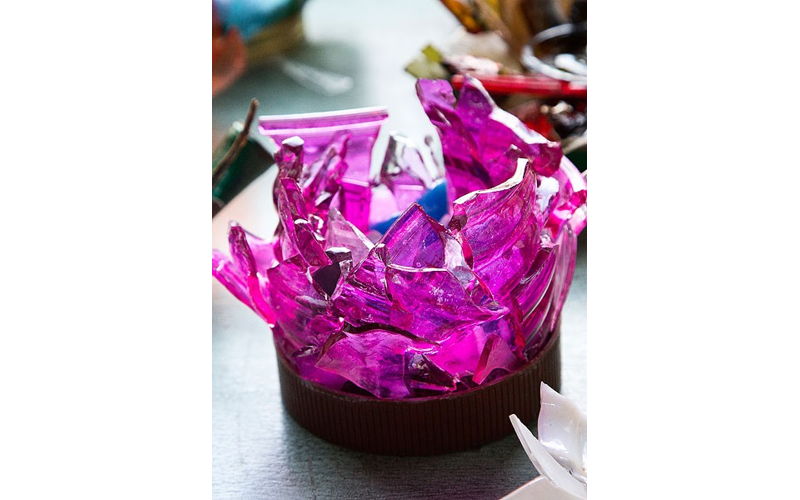 In Japan there’s a long-running tradition called senbazuru where individuals string together 1,000 origami cranes. Cranes are seen as mystical creatures in Japanese culture, and 1,000 paper cranes are often given at weddings to imply a thousand years of happiness and peace. The history of the art form is varied, but one more recent story is based on the life of Sadako Sasaki.

When the atomic bomb was dropped on Hiroshima in 1945 Sasaki, then two years old, was exposed to radiation. Later she developed leukemia, which her mother called “atomic bomb disease.” Forced to live in a nursing home, Sasaki decided to fold origami cranes hoping that, as legend promised, she would be cured her if she made 1,000. Sasaki managed to fold 644 before passing away at age 12. But her family and friends took up the cause and completed the project in honor of peace. Inspired by the tale, McClellanville glass/collage artist Melanie McClellan-Hartnett is collecting and crafting 1,000 original flower sculptures for a Sat. Oct. 18 exhibit she’s calling Preview for Peace, a preview of her Sen No Hana project.

To really understand McClellan-Hartnett’s vision, though, it helps to know a bit of history. Sen No Hana first began to take shape while McClellan-Hartnett was on a trip to the American West. While she was there, the waitress and sometimes writer, found herself collecting “bits and pieces” of materials as she traveled, from items on Native American reservations to truck stops and petrified forests.

“I was really getting the sense,” she remembers of the trip, “that time was so much bigger than we are.” Upon returning home to McClellanville, she began work on what would become a mosaic piece, “American Madonna,” which incorporates many of the items she picked up on her trip, as well as glass, and other elements. Somehow, she had become an artist.

But it wasn’t until a friend introduced McClellan-Hartnett to senbazuru that Sen No Hana was born. The concept inspired McClellan-Hartnett to think about ways to combine some of the elements with her own mosaic work. Originally conceived as 1,000 lily sculptures, composed primarily of shattered glass and found materials, the project has since morphed into something different — a collaboration with the entire McClellanville community.

Currently, Sen No Hana includes work by scores of participants. Local artists, such as Yuka Otani and Tobin Hines, have participated and are donating work. So are friends, relatives, neighbors, and students at local schools. Everyone involved is contributing materials, talents, and time toward what McClellan-Hartnett describes as something simultaneously “wonderful” and “overwhelming.” The project has gradually expanded away from restrictions on materials that can be used and the specific type of flower that can be made. “People wanted to do all kinds of flowers,” she says. “I was like, ‘Just grow with it.'”

She has maintained a focus on cast-off and damaged materials, however, as she sees garbage as consistent with the idea of finding beauty and purpose in what’s often simply discarded. As for keeping the magic number at 1,000, instead of something more manageable, McClellan-Hartnett responds that part of the appeal is “about the discipline.”

As more people continue to take part in the project, McClellan-Hartnett has been surprised and impressed by what she has seen contributed. Local Native American pottery fragments, buttons, pieces of golf balls, and other flotsam have found its way into the jars and bowls that crowd her charmingly chaotic home studio. A Christmas ornament, a fragment of a once-cherished vase, and a toilet seat have gotten second lives as well. She pulls out a strip of rubber, explaining that someone even donated a pair of old shrimp boots. Aside from the fact that shrimping is a historically significant activity in McClellanville, going back generations, the material also appeals to her for other reasons. “It’s flimsy,” she says. “It’s transient. It’s exactly what [Sen No Hana] is about.”

Recently, when McClellan-Hartnett took her idea to Lincoln Middle-High School, she ended up with wooden flowers. The reason is simply that the wood was available, and the “kids knew what to do with it.”

While some might find “peace” as a somewhat amorphous or idealistic goal for an art project, McClellan-Hartnett has worked with East Cooper Habitat for Humanity to ensure that any funds raised through the sale or exhibit of Sen No Hana will go directly toward supporting the construction of Habitat housing for local families.

In the meantime, McClellan-Hartnett opens her Smash Glass studio to all comers at least once each week and provides materials to anyone interested in participating. “It’s good juju,” she says, adding that it’s “very inspiring” to see people, whether or not they consider themselves artists, create something that is both personal and part of something bigger. “Some take 10 minutes, some take days,” McClellan-Hartnett says. “It all depends on the person.”

For the younger participants, she says, “You’re too young for the [Habitat for Humanity] job site, but you can still help people build these houses.” And for others who can’t contribute with a flower of their own, McClellan-Hartnett is accepting donations of epoxy through East Cooper Habitat for Humanity, the McClellanville Arts Council, or her own Smash Glass Studio.

Asked how close she is to the goal of 1,000 flowers, McClellanville thinks for a moment. She goes with 250. “That might be optimistic, but I think it’s about right,” she says.

Currently McClellan is in the process of setting up a few more workshops, through various clubs, groups, and schools, but she doesn’t seem too worried. While she’s adamant that 1,000 is still the goal, it’s also possible the project has become more about the process than reaching the finish line. “It’s brought people together,” she says.